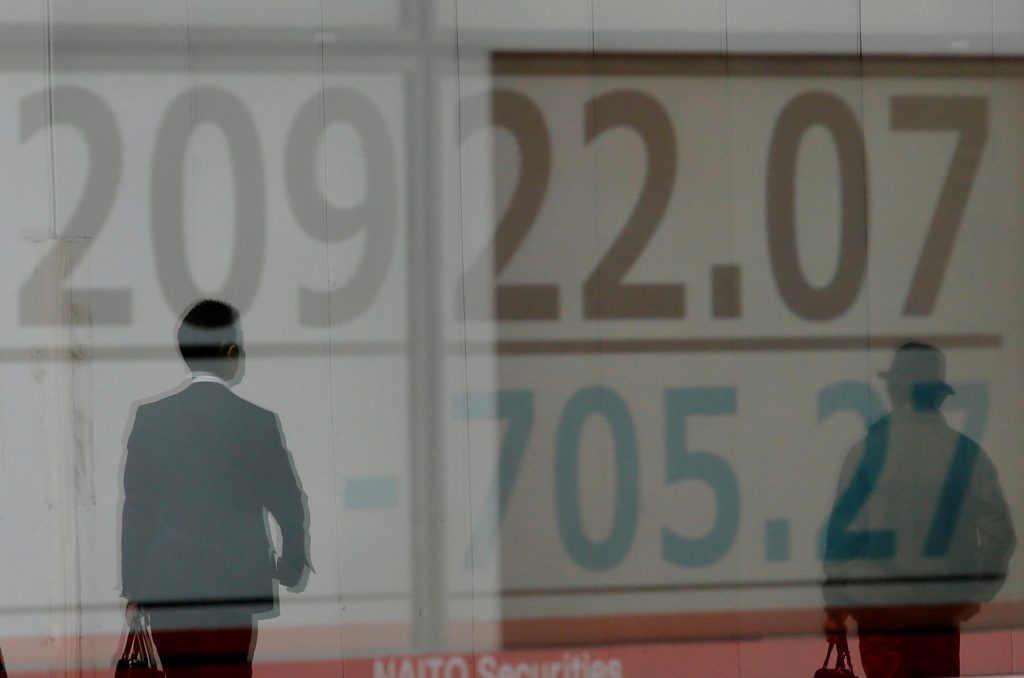 Investors ditched shares on Monday and fled to the safety of bonds as risk assets fell out of favor on growing fears of a U.S. recession, sending global yields plunging.

The gloomy mood was expected to spread across Europe and U.S. markets, spread-betters showed, with London’s FTSE futures off 0.3 percent and E-minis for the S&P 500 skidding 0.5 percent.

MSCI’s broadest index of Asia-Pacific shares outside Japan dropped 1.5 percent to a one-week trough in a broad equities sell-off in the region.

Chinese shares were also in the red with the blue-chip CSI 300 index down 1.4 percent.

Concerns about the health of the world economy heightened last week after cautious remarks by the U.S. Federal Reserve sent 10-year Treasury yields to the lowest since early 2018. U.S. 10-year Treasury yields were last 1.9 basis points below three-month rates after yields inverted for the first time since 2007 on Friday. Historically, an inverted yield curve – where long-term rates fall below short-term – has signaled an upcoming recession.

“The bond market price action is an enormous blaring siren to anyone trying to be optimistic on stocks,” JPMorgan analysts said in a note to clients.

“Growth, and bonds/yield curves, will be the only thing stocks should be focused on going forward, and it’s very hard to envision any type of rally until economic confidence stabilizes and bonds reverse,” it added.

Compounding fears of a more widespread global downturn, manufacturing output data from Germany showed a contraction for the third straight month. In the United States, preliminary measures of manufacturing and services activity for March showed both sectors grew at a slower pace than in February.

A yield/curve recession model by National Australia Bank is pointing to a 30-35 percent probability of a U.S. recession occurring over the next 10-18 months.

“The risk of a U.S. recession has risen and is flashing amber and this will keep markets pricing a high chance of the Fed cutting rates,” said London-based NAB strategist Tapas Strickland.

As bonds rallied on Monday, yields on 10-year Japanese government bonds slumped to minus 9.2 basis points, the weakest since September 2016. Australian 10-year year yields plunged to a record low of 1.754.

Some analysts, such as ING’s Rob Carnell, advised against rushing to place bets on the yield inversion.

“We suspect that drawing a recession conclusion from such data is not warranted until the 3M-10Y yield curve is inverted by a substantial amount,” Carnell said. “Just inverted as today’s markets indicate, doesn’t do it for me.”

Much of the concerns around global growth are stemming from Europe and China, which are battling separate tariff wars with the United States.

Politics was also in focus in the United States and Britain.

A nearly two-year U.S. investigation found no evidence of collusion between President Donald Trump’s election team and Russia, in a major political victory for Trump as he prepares for his 2020 re-election battle.

Political turmoil in Britain over the country’s exit from the European Union also remains a drag on risk assets.

Prime Minister Theresa May held crisis talks with senior colleagues and hard-line Brexiteers on Sunday trying to breathe life into her twice-defeated European divorce deal after reports her Cabinet was plotting to topple her.

Rupert Murdoch’s Sun newspaper said in a front page editorial that May must announce on Monday that she will stand down as soon as her Brexit deal is approved.

The British pound was 0.1-percent lower at $1.3197 after three straight days of wild gyrations. The currency slipped 0.7 percent last week.

In forex markets, the Japanese yen – a perceived safe haven – held near its highest since Feb. 11. It was last barely changed at 109.9 per dollar.

The Australian dollar, a liquid proxy for risk play, was flat at $0.7082 after two straight sessions of losses.