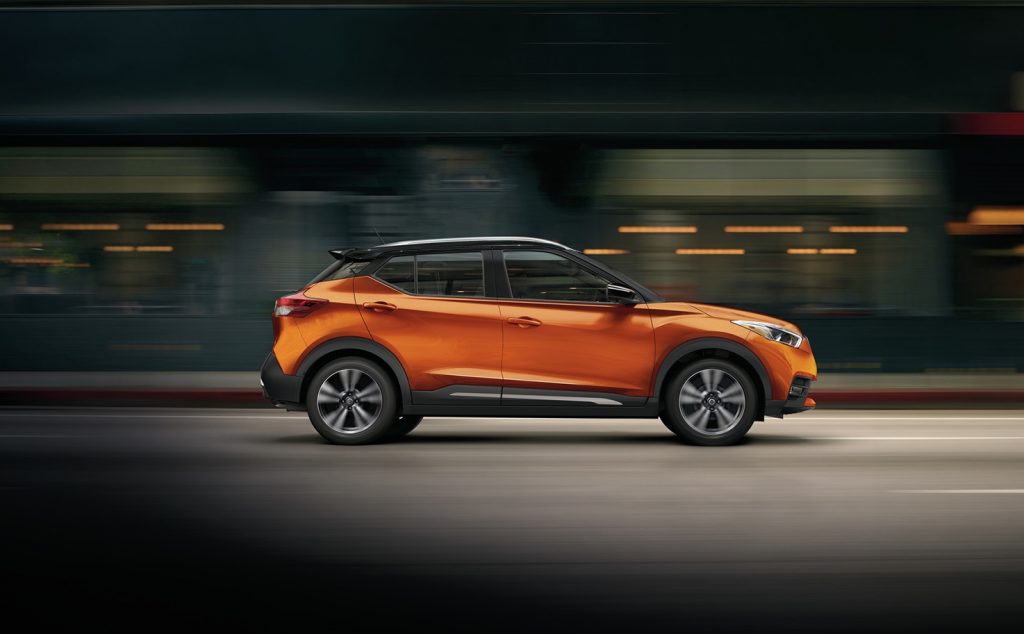 Marketer’s pitch: “Own your moment.”

Reality: It takes more than a moment to grow on you, but it’s still a little Soul-less.

What’s new: The whole Kicks, front to back. The little crossover replaced the Juke for the 2018 model year (which is the model year I tested).

First impressions: I’m not a shoot-from-the-hip reviewer. I like to mull cars over for a couple days before I start making notes.

Good thing for the Kicks that I traveled close to 1,000 miles in this baby. Sometimes I’m just being cranky, but after a couple days, I soften up.

Up to speed: The Kicks features Nissan’s 1.6-liter four-cylinder and makes just 122 horsepower. I thought for sure this would be a dog on the highways. But once I got used to it, the Kicks kicked pretty well. Still, it gets to 60 mph in lethargic 9.9 seconds, according to Motor Trend.

Shiftless: Though I missed having any shift control with the CVT, the Kicks didn’t do badly overall. Only on one long, uphill entrance ramp to the Pennsylvania Turnpike did I feel seriously outmatched by other vehicles.

On the road: The curves are nothing to excite drivers about when piloting this little box, but the performance there matches such competitors as the Subaru Crosstrek, Toyota C-Hr and Soul. The Kicks’ forebrother, the Juke, offered nicer handling.

The highway manners of the Kicks, though, are fairly pleasant. It’s pretty harsh on rough roads, but high speeds are no problem at all.

Driver’s Seat: I drove a bare-bones model with inexpensive cloth seats and manual seat operation. I’m happy to report they were comfortable. They’re a little on the soft side, but they keep occupants in place.

Friends and stuff: From the rear, 6-foot-2 Sturgis Kid 4.0 dubbed the seat comfortable and roomy, though he was relegated to sitting directly behind his 5-foot-5, well-scrunched mom. Behind me, there would be too many unpleasant Kicks in the rear.

Cargo space is 25.3 cubic feet behind the rear seats and 53.1 with the seats folded.

Play some tunes: Here is the point where the Kicks and I part ways. The bare-bones stereo just made my ears weep. (Motor Trend’s SR must have had the $1,000 Premium Package, which adds Bose premium audio.)

The Kicks stereo offers bass, treble and mid-range adjustments, and even something called bass booster. Bass was just fine, but despite adjusting the controls from one end to the other, it always sounded like I was listening to my favorite songs through a telephone line.

The stereo system also caused my iPhone songs to skip. I’d just reloaded the phone with new music and was sure something had gone wrong in the CD recording, but the skips stopped as soon as I changed vehicles.

What’s more, many carmakers never seem to test their vehicles outside on sunny days. It’s truly annoying to check the 7-inch touchscreen and see nothing but glare.

Keeping warm and cool: One knob controls fan, another temperature, and tiny, fussy buttons control air source and other functions.

But the buttons match the tiny, fussy display screen that reports back on the fan speed and other information. Big distraction for the driver.

Night shift: None of the interior lights provided acceptable brightness for use while driving at night. The map light was far too bright, while the others were too dim.

The headlights aimed a little low, as well.

Fuel economy: I averaged about 29 mpg in a more highway-heavy range than the usual Mr. Driver’s Seat testing grounds. Feed the Kicks anything you like.

How it’s built: Consumer Reports predicts its reliability to be a 3 out of 5.

In the end: It’s not that easy to find a roomy-ish $20,000 car nowadays. The Nissan Kicks isn’t a bad deal, but it’s quite slow. Upgrading the stereo means a whole bunch more money, though.

I’d probably shop around for the Mazda CX-3 or Hyundai Kona as well before committing to this.