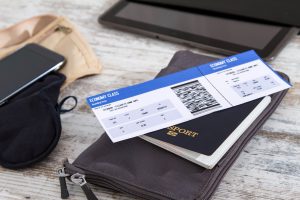 By 2021, Americans traveling to certain countries in Europe will have to preregister online as part of a security system intended to screen visa-free travelers.

The European Union announced last year that before entry, travelers from all visa-free countries, including the United States, will need to preregister and pay a small application fee using the European Travel Information and Authorization System (ETIAS), a system designed “to strengthen security checks on those persons who travel visa-free to the EU,” according to a fact sheet from the European Commission. It applies to people traveling to Europe’s Schengen Zone, an area comprising of more than two dozen countries, including France, Germany and Spain, but not England.

Currently, U.S. citizens with a valid passport can visit Schengen countries and stay for up to 90 days without a visa, according to the State Department.

News outlets, including CNN, Esquire and Travel & Leisure, mistakenly reported this week that starting in 2021, U.S. travelers will need a visa to visit Europe.

It is not a visa.

Officials with the European Commission and the U.S. State Department, who spoke on the condition of anonymity to speak freely on the process, confirmed that ETIAS is simply a travel authorization for visa-free travelers, similar to the U.S. Electronic System for Travel Authorization (ESTA) to screen people in the Visa Waiver Program (VWP). Inaccurate news reports have recently stated that the EU’s ETIAS is a visa program.

The news reports appeared to lead to confusion online.

The EU delegation to the United States tried to clear it up, tweeting Friday, “Neither the #ESTA nor the future #ETIAS (EU equivalent) are visas. They carry out pre-travel screening for travellers benefiting from visa-free access.”

A spokesman for the European Commission said that the European Union decided to establish the ETIAS system in summer 2018 and it will be operational in 2021.

In 2016, the European Commission proposed ETIAS, “an automated IT system created to identify any security or irregular migratory risks posed by visa-exempt visitors travelling to the Schengen area, whilst at the same time facilitate crossing borders for the vast majority of travellers who do not pose such risks,” according to the fact sheet, which the commission released in July.

“The ETIAS authorisation is not a visa,” the commission said. “Nationals of visa liberalisation countries will continue to travel the EU without a visa but will simply be required to obtain a travel authorisation via ETIAS prior to their travel. ETIAS will be a simple, fast and visitor-friendly system, which will, in more than 95% of cases, result in a positive answer within a few minutes.

“An ETIAS travel authorisation does not reintroduce visa-like obligations,” the commission continued. “There is no need to go to a consulate to make an application, no biometric data is collected and significantly less information is gathered than during a visa application procedure. Whereas, as a general rule, a Schengen visa procedure can take up to 15 days, and can in some cases be extended up to 30 or 60 days, the online ETIAS application only takes a few minutes to fill in. The validity will be for a period of three years, significantly longer than the validity of a Schengen visa. An ETIAS authorisation will be valid for an unlimited number of entries.

“The ETIAS travel authorisation will be a necessary and small procedural step for all visa-exempt travellers which will allow them to avoid bureaucracy and delays when presenting themselves at the borders,” the commission said. “ETIAS will fully respect this visa-free status; facilitate the crossing of the Schengen external border; and allow visa free visitors to fully enjoy their status.”

Travelers will need a documentation, such as a passport, and be asked to pay a $7 application fee.

It is not entirely certain why ETIAS has been mischaracterized as a visa program, but a travel agency called ETIASVisa.com incorrectly stated on its website that “US citizens traveling to Europe will shortly need to apply for an ETIAS (European Travel Information and Authorization System) visa which is the new travel visa to visit Europe that will come into effect from 2021. Similar to other countries and regions in the world Europe has recently decided to improve their security level to avoid any further problems with illegal migration and terrorism. This means that from 2021, all Americans traveling to a European Schengen-zone country will be in need of an ETIAS.”

At least one news outlet linked to information from ETIASVisa.com while citing the European Union.

ETIASVisa.com states that it is a travel agency and is “not affiliated with any European Government.”

Travelers will not need to use a travel agency to register with ETIAS but can do it themselves online.