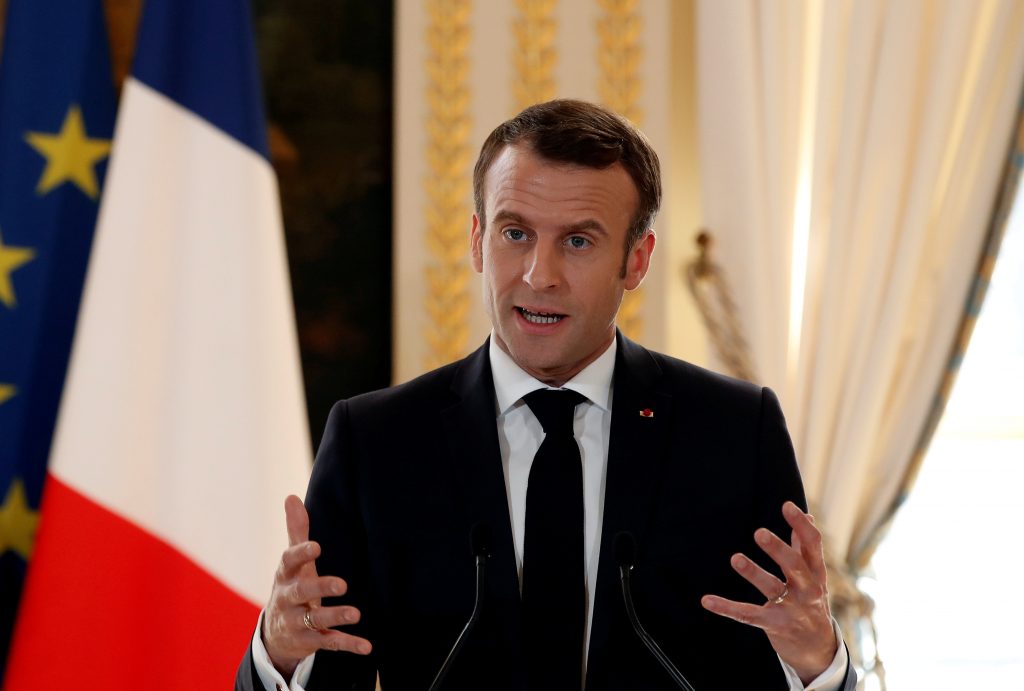 French President Emmanuel Macron released a soaring statement Tuesday, ahead of critical Europe-wide elections in May, pitting his vision for a further integrated continent against what he described as the false promises of nationalism.

“Never since the Second World War has Europe been as essential,” Macron wrote in an op-ed translated into 22 languages and published in newspapers in each of the European Union’s 28 countries. “Yet never has Europe been in so much danger.”

Macron held up Brexit as a double warning – that the European Union “has failed to respond to its peoples’ needs for protection from the major shocks of the modern world,” and also that “retreating into nationalism offers nothing; it is rejection without an alternative.”

But while repeatedly attacking his nationalist opponents, he offered significant concessions to those on the right who want more-stringent immigration controls. “I believe in a Europe that protects both its values and its borders,” he wrote.

He advocated the creation of “a common border force and a European asylum office,” as well as a “European Council for Internal Security” that in theory would oversee these new operations.

He also suggested a “need to rethink the Schengen area,” a central component of European life that guarantees the freedom of movement for EU nationals.

“All those who want to be part of it should comply with obligations of responsibility (stringent border controls) and solidarity (a single asylum policy with common acceptance and refusal rules),” Macron wrote.

Macron – whose market laws have earned him the nickname “president of the rich” in France – attempted to address widespread concerns over inequality in the op-ed. But it remained unclear how this acknowledgment would translate into policy.

“Europe, where social security was created, needs to introduce a social shield for all workers,” Macron wrote, “guaranteeing the same pay for the same work, and an EU minimum wage, appropriate to each country, and negotiated collectively every year.”

Macron also called for a new agency to protect against cyberattacks and election interference by foreign powers, as well as rules banning online incitement of hatred and violence.

The statement built on remarks Macron delivered about his vision for the continent in September 2017, and it echoed themes he has advocated for this year in town halls across France.

His “grand debat” talking tour is purportedly an effort to better understand the concerns behind the “yellow vest” protests that have roiled the country since mid-November. It also has helped Macron regain some popularity after a precipitous decline.

Dominique Moisi, who advised Macron’s presidential campaign and is a fellow at the Institut Montaigne think tank, said Tuesday’s op-ed can be seen as an extension of the same effort by Macron to reassert himself.

“Macron has realized quite early that there was a direct link between his influence abroad in Europe and in the world beyond Europe, and his popularity at home,” Moisi said. “He’s going up regularly in the polls, and he wants to capitalize on that – to say, ‘You thought I was dead, but it was premature. Now I’m back.’ ”

Macron’s Republique En Marche party, which has a majority in French Parliament, is running for the European Parliament for the first time this year. Voters across Europe will go to the polls between May 23 and May 26 to select the 705 lawmakers who will serve for the next five years.

Republique En Marche (Republic on the Move) is campaigning with European Parliament’s liberal bloc, with a platform that frames the stakes much like Macron’s op-ed: “The choice is the following: We update the European Union to develop individual freedom, prosperity and stability, or we go back to the times of nationalism and growing authoritarianism.”

The yellow vests also have put forward several competing lists of candidates, although they may not meet the threshold of 79 candidates required to participate. Infighting has undermined the movement’s ability to organize.