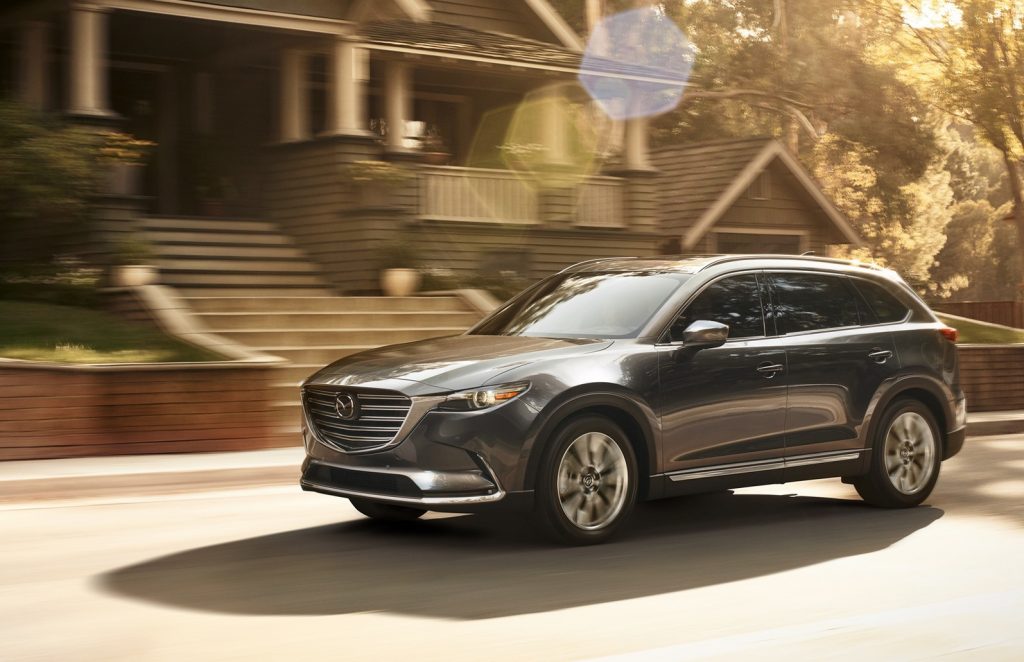 Conventional wisdom: Among other things, Consumer Reports likes its “nimble handling for its size, effortless power delivery, comfortable ride, above-average fuel economy,” but not its “infotainment system’s learning curve, limited range of front seat adjustments,” and that it’s “not as roomy as some competitors” and “short on towing capacity.”

What’s new: As the company puts it, “Mazda’s engineers could have left well enough alone for their award-winning family vehicle.” So, not much has changed for a vehicle that’s been with us since 2016, the year of the three-row crossover’s last redesign. (I actually tested a 2018.)

Up to speed: It’s pretty amazing that the CX-9 has only the Mazda 2.5-liter four-cylinder turbo under the hood. This version of the basic Mazda power plant creates a healthy 227 horsepower, but torque is a whopping 310 pound-feet. That means the biggish crossover doesn’t feel as if it’s dragging under heavy acceleration. Sixty miles per hour zooms up in 7.1 seconds, according to Car and Driver.

On the curves: Here, though, the CX-9 remains a crossover with two personalities. In sport mode, the large vehicle handles fairly well and a bit of fun comes through on winding roads. Not too much, mind you, but some.

Turn off sport mode, and the CX-9 becomes a lumbering beast, almost in the category of some old Toyota trucks. I felt a bit of weave on some country roads, although its manners are better on highways.

Cruising: Some readers might be thinking, “Well, OK, Sturgis, if you hate regular mode, leave it in sport.” But a big snag lurks in the cruise control system.

Driver’s Seat: The CX-9 sits lower than most crossovers, and so driving on narrow streets feels more comfortable and almost wagonlike. Getting in the vehicle should be easier on older folks and young kids.

The seat itself is comfortable and supportive, though just a little to the firm side.

The Mazda CX-9 offers a pretty interior with lots of comfort, although the seats are a bit firm. The stereo remains a hit.

Friends and stuff: Sure there are “three rows” in this “SUV” and you can fit “seven people.” Remember the story of Snow White? Well, her seven friends would be fine.

Legroom in the middle is accommodating. But rear-row seats are tight, sit low, and knees and chins become well acquainted.

Cargo space is a teeny 14.4 cubic feet behind the third row and a useful 71.2 with two rows folded.

Play some tunes: Mazda keeps its single-knob-controlled infotainment system, with the upright display on the dashboard. Operation is fairly intuitive, with buttons to get one from screen to screen.

Kudos to Mazda for clear, precise rearview cameras. I find the CX-9 — and all Mazdas, really — super easy to park exactly parallel with parking-lot lines. It’s surprising how many camera systems distort the view so much that this can seem an impossible task.

Night shift: The headlights cast a bright shine on the road ahead. Interior lights are quite strong and not as subtle as some of today’s fancier brands.

Fuel economy: I averaged 19.5 mpg in the usual Mr. Driver’s Seat round of testing — pretty low. Much better than it had been previously, though.

How it’s built: Consumer Reports predicts the CX-9’s reliability will be a 4 out of 5. The crossover also gets a recommended rating.

In the end: The Subaru Ascent has better space and fuel economy and is cheaper. The CX-9 gives a better driving experience, and its technology is not nearly as intrusive.