Technology Using One Germ to Fight Another When Antibiotics Fail
Health, Science & Technology 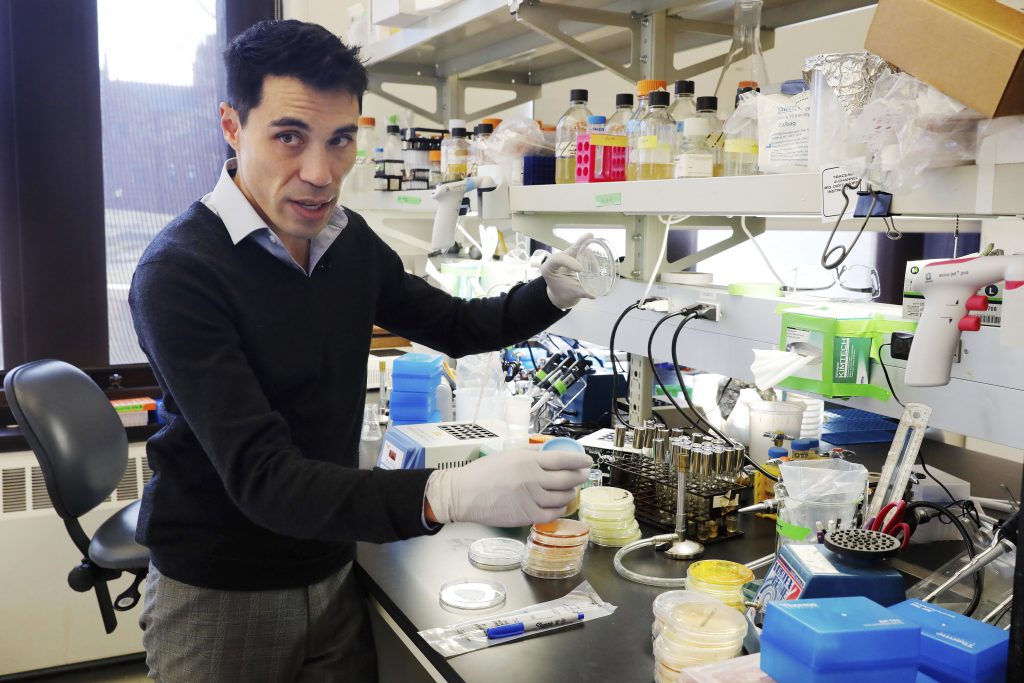 Bacteria lodged deep in Ella Balasa’s lungs were impervious to most antibiotics. At 26, gasping for breath, she sought out a dramatic experiment — deliberately inhaling a virus culled from sewage to attack her superbug.

“I’m really running out of options,” said Balasa, who traveled from her Richmond, Virginia, home to Yale University for the last-resort treatment. “I know it might not have an effect. But I am very hopeful.”

Pitting one germ against another may sound radical, but it’s a sign of a growing global crisis. Increasingly people are dying of infections that once were easy to treat because many common bugs have evolved to withstand multiple antibiotics. Some, dubbed “nightmare bacteria,” are untreatable. Now scientists are racing to find novel alternatives to traditional antibiotics, a hunt that is uncovering unusual ways to counter infection, in unusual places.

One possible treatment tricks bacteria out of a nutrient they need to survive. Others rev up the immune system to better fend off germs.

And viruses called bacteriophages — discovered a century ago but largely shelved in the West when easier-to-use antibiotics came along — are being tried in a handful of emergency cases.

“People’s frustration with antibiotic resistance boiled over,” said Yale biologist Benjamin Chan, who travels the world collecting phages and receives calls from desperate patients asking to try them. “We’re more appreciative of the fact that we need alternatives.”

Balasa has a genetic disease called cystic fibrosis that scars her lungs and traps bacteria inside, including a superbug named Pseudomonas aeruginosa. A daily dose of inhaled antibiotics kept the infection in check until last fall, when the drugs quit working. A last-ditch IV antibiotic wasn’t helping much either.

Chan grew a sample of Balasa’s bacteria from her phlegm. Then came the key test: He dripped several pseudomonas-targeting phages into the grimy dish — and clear circles began appearing as the viruses consumed the bugs around them.

But would what worked in the lab really help Balasa’s lungs?

At least 23,000 Americans die every year as a direct result of an antibiotic-resistant infection, and many more die from related complications, according to a 2013 report from the Centers for Disease Control and Prevention. The CDC plans an updated count, but other research has estimated the toll could be seven times higher.

And while there are no good counts in much of the world, one often-cited British report said unless solutions are found, by 2050 up to 10 million people globally could be dying from drug-resistant infections, slightly more than die from cancer today.

Yet few new antibiotics make it to market, and many major drug companies have ended antibiotic research, seeing little profit in medicines that germs will soon outsmart. A recent report found just 11 traditional antibiotics being studied to treat any of the World Health Organization’s list of worst bugs, with no guarantee they’ll work.

And while some people are more at risk — those getting surgery, or cancer chemotherapy, for example — “antibiotic resistance is a problem essentially for everyone,” said Dr. Anthony Fauci, infectious diseases chief at the National Institutes of Health.

“Over the next several years, all indicators seem to point to the fact that this is going to get worse and worse,” he added.

Finding alternatives means “figuring out what the vulnerabilities of infecting bacteria are. What do they need to cause an infection?” said Dr. Pradeep Singh of the University of Washington.

Singh and fellow UW lung specialist Dr. Christopher Goss zeroed in on iron, a nutrient vital for bacterial growth. It turns out that bugs can’t always tell the difference between iron and a chemically similar metal named gallium. Gallium doesn’t nourish and knocks other systems out of whack, Goss said.

For two small studies, the researchers recruited cystic fibrosis patients who had antibiotic-resistant pseudomonas in their lungs but weren’t openly sick. The patients received a five-day infusion of a gallium-based drug. Over the next few weeks, their lung function improved, enough that next-step studies are being planned.

“It just seems like a proactive way of destroying bacteria,” said study participant Tre LaRosa, 24, of Cincinnati. His sister died of cystic fibrosis and while his own CF is under control, he worries that one day a resistant infection will flare. “I can’t do anything to prevent that. Antibiotic resistance I think is one of the least talked about and most significant concerns.”

Fauci envisions doctors one day vaccinating people a few weeks before, say, a planned knee replacement to guard against catching a staph infection in the hospital.

Sixteen experimental vaccines are in development to target various infections, according to a recent presentation to a presidential advisory council on resistant germs.

Particularly promising, Fauci says, are lab-engineered “monoclonal antibodies” designed to home in on specific bugs. In one set of studies, researchers are giving experimental antibodies to ventilator patients who have bacteria building up that could trigger pneumonia.

HARNESSING VIRUSES FOR THE BEST ATTACK

In Virginia, Balasa learned of another cystic fibrosis patient helped by Yale’s phage experiments and asked to try, hoping to postpone the last option for CF, a lung transplant.

Phages work very differently than traditional antibiotics. Like a parasite, the virus infiltrates bacterial cells and uses them to copy itself, killing the bug as those copies pop out and search for more bacteria. Once the infection’s gone, the virus dies out. Because each phage only recognizes certain bacteria, it shouldn’t kill off “good bugs” in the digestive tract like antibiotics do.

Bacteria evolve to escape phages just like they escape antibiotics, but they generally make trade-offs to do so — such as losing some of their antibiotic resistance, said Yale evolutionary biologist Paul Turner.

For example, some phages recognize bacteria by a pump on their surface that deflects antibiotics. As the phages kill those bugs, the bacteria rapidly evolve to get rid of that surface pump — meaning survivors should be susceptible to antibiotics again.

“It’s reviving an arsenal of drugs that are no longer useful,” Turner said.

Yale’s first test case was an 82-year-old man near death from a heart implant teeming with untreatable pseudomonas. Chan purified a phage from a Connecticut lake that he’d matched to the patient’s germs, and with emergency permission from the Food and Drug Administration, doctors squirted it into the wound. The man’s infection disappeared.

Then doctors at the University of California, San Diego, saved a colleague who’d been in a months-long coma, using an IV mixture of several phages that target a superbug named Acinetobacter baumannii.

Doctors and families began calling both centers seeking emergency care, even as formal studies are being planned to try to prove phages’ value.

“There’s an incredible opportunity here,” said Yale pulmonologist Dr. Jon Koff. “But with that you have to have the appropriate amount of skepticism,” with careful testing to tell when it might help.

Almost immediately, she was coughing up fewer bacteria. It took a few weeks for her to feel better, though, and during that time she switched briefly to some antibiotics she’d previously given up. Without a formal study it’s hard to know, but Chan’s tests suggest phages killed much of her predominant pseudomonas strain and made the survivors sensitive again to a course of those antibiotics.

Balasa called that “a very big success for me,” and was able to quit her antibiotics. She didn’t notice additional improvement after a second round of phages, aimed at different strains.

“The true test,” Balasa said, “is how long I can go without using any antibiotics again.”