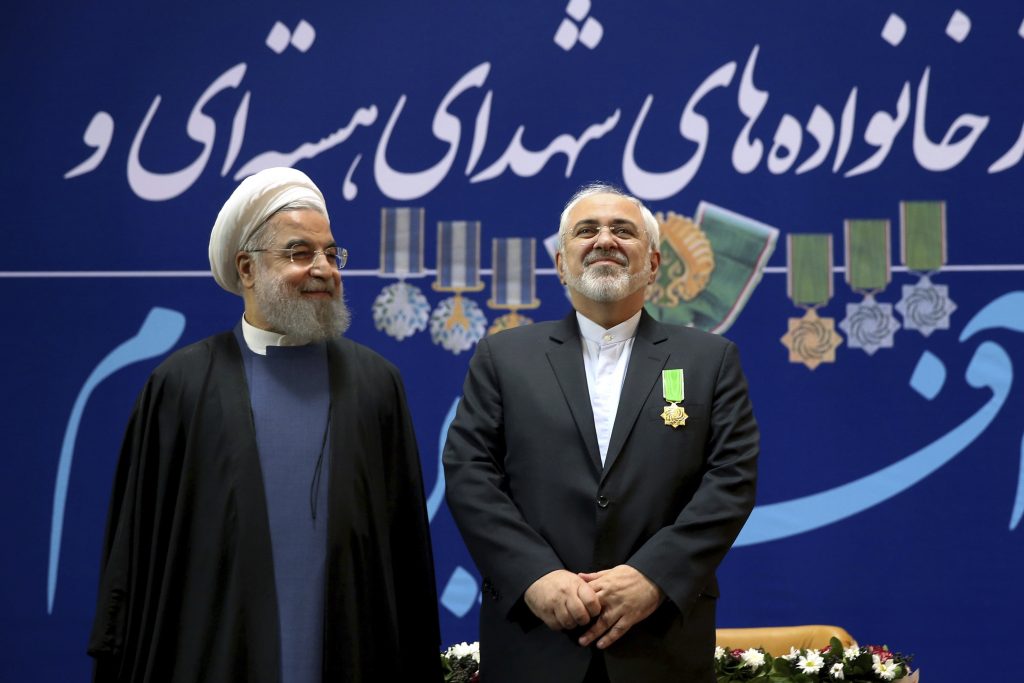 The nuclear deal with world powers once buoyed the political fortunes of Iran’s President Hassan Rouhani and his trusted Foreign Minister Mohammad Javad Zarif. Now it threatens to sink them.

Facing growing political and economic pressure after President Donald Trump’s decision to withdraw America from the atomic accord, Zarif resigned suddenly Monday night and Rouhani now faces renewed calls from hard-liners to do the same.

While Rouhani has yet to accept Zarif’s resignation, the relatively moderate cleric has hardened his tone toward the West. The fallout has also exposed inner tensions within Iran’s theocracy, where both elected officials and paramilitary forces answer to Supreme Leader Ayatollah Ali Khamenei.

Late Monday, Zarif posted a picture on social media. He wrote in the caption: “I sincerely apologize for inability to continue service and for all the shortcomings during my service.” Minutes later, Iran’s state-run IRNA news agency confirmed through a spokesman that Zarif, 59, had resigned.

That remains unclear. Zarif on Tuesday morning reportedly told diplomats his resignation would further empower the Foreign Ministry against those who encroach on it. The remarks came after Syrian President Bashar Assad was received by Khamenei and Gen. Qassem Soleimani, the head of an elite force within the Revolutionary Guard. Photographs of the meetings released by state media showed no sign that Zarif attended.

WHY IS THIS IMPORTANT?

Zarif was the main negotiator of the 2015 nuclear deal, which he hammered out during several rounds of talks with then-Secretary of State John Kerry. He was also seen as the face of Iran’s growing outreach to the West, frequently tweeting in English.

His resignation comes amid growing criticism of that approach. Iranians celebrated the signing of the nuclear deal, which promised to lift crippling sanctions in exchange for Tehran curbing its uranium enrichment. But the agreement was cast into doubt with Trump’s election, and he withdrew from it and restored sanctions last year.

As a result, most Iranians saw no benefit from the deal, or from Rouhani and Zarif’s outreach. Iran’s currency has tanked over the past year, wiping out people’s life savings and sending prices soaring. Sporadic protests have broken out, and Rouhani has recently adopted a stronger tone toward the West.

WHO IS IN CHARGE?

The supreme leader has the final say on all state matters and serves as the country’s commander in chief. Iranian presidents serve four-year terms and are subordinate to the supreme leader but still wield considerable influence over both domestic policy and foreign affairs. Iran also has an elected parliament.

Within its elected government, politicians are roughly divided into reformists who seek to change Iran’s political system from within; hard-liners, who believe the supreme leader is God’s chosen representative and want a more confrontational approach to the West; and moderates, who chart a middle path.

But there’s also the Revolutionary Guard, which answers directly to the supreme leader. The Guard’s political and economic influence has ballooned in recent years, and Soleimani has emerged as a national hero over his role in leading its military interventions around the region. Many Iranians say they trust the Guard more than the civilian government, suggesting it should take on an even greater role.

Rouhani must now decide whether to accept or reject Zarif’s resignation. Analysts and others say this is Zarif’s third resignation in the last year, but the first to become public. It’s also likely Zarif spoke first with the supreme leader to get his permission, which would further pressure Rouhani to accept it.

If Rouhani accepts his resignation, the choice of Zarif’s successor will signal the president’s future approach to the West. U.N. inspectors say Iran is still complying with the nuclear deal. But as it continues to unravel, Iran may decide it has more to gain by withdrawing from the agreement, or threatening to do so.

Either way, Rouhani could be the next to go, as hard-liners increasingly speak about impeaching him.