World ANALYSIS: At the Hanoi Summit, Trump and Kim Jong Un May Declare the Korean War Over. Does it Still Matter?
World 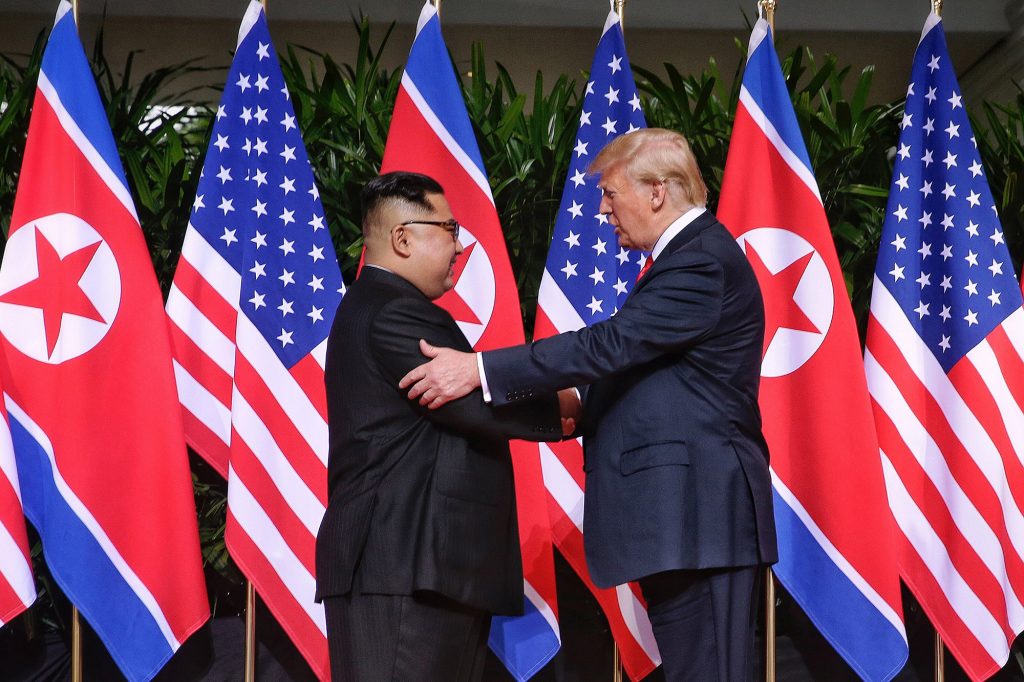 The signing took all of 10 minutes. Neither man uttered a word as they inked nine documents agreeing to halt more than three years of brutal fighting. When it was done, the American and North Korean generals exchanged one long, cold stare before leaving the room.

It was July 1953. U.S. 8th Army commander Gen. Maxwell D. Taylor reminded reporters the war wasn’t yet over. The cease-fire agreement was “just a suspension of hostilities, which may or may not be preparatory to permanent peace,” he said at the time.

Taylor died in 1987, the same year as Lt. Gen. William K. Harrison, who signed the agreement on behalf of the Americans. North Korea’s signatory, Gen. Nam Il, died in 1976. Commander Mark W. Clark, who later signed it for the United Nations, died in 1984.

The Korean War is still not over.

As President Donald Trump gets ready to once again sit down with North Korea’s leader this week, current and former administration officials and Korea analysts are increasingly saying Trump will probably agree to declare a formal end to the Korean War, giving in to a long-standing North Korean demand. For decades, U.S. presidents have refused to do so, insisting North Korea first needs to fully denuclearize.

The declaration would not be the same as a legally binding peace treaty, so technically either side could go back on their word. But it would mean the U.S. and North Korea would officially no longer be enemy nations at war and acknowledge the reality that combat has long since ended.

“President Trump is ready to end this war. It is over. It is done,” Stephen Biegun, the United States’ top negotiator with North Korea, said in a speech at Stanford this month. “We are not going to invade North Korea. We are not seeking to topple the North Korean regime.”

But more than 65 years since the fighting stopped, does it even matter?

An end-of-war declaration, unlike a peace treaty, would be a nonbinding agreement and largely a political statement. Analysts said it would be an easy, ready-made result from the Hanoi summit that Trump could tout – achieving peace on the Korean peninsula, however symbolic – even if there aren’t substantive concessions from North Korea on its nuclear capabilities.

On one end of the spectrum, those willing to give North Korea the benefit of the doubt say the peace declaration would give Kim Jong Un the internal justification he needs to take steps to denuclearize, after having spent many billions of dollars and endured international sanctions to obtain the nuclear weapons.

“The sooner a declaration ends the Korean War, the faster North Korea’s denuclearization,” South Korea’s liberal Hankyoreh newspaper said in an editorial last year. “It’s the only way to assuage the North’s fears.”

Some observers have also said the declaration might be “a low-cost way” to test out North Korea’s true intentions and see if the promise of better relations with the U.S. would translate into giving up parts of its nuclear program.

“If, after an end-of-war declaration, North Korea doesn’t take further denuclearization measures, we will know that Kim is not serious about denuclearization under any circumstance,” former Defense Department advisor Frank Aum and attorney S. Nathan Park wrote in a CNN opinion piece.

Many other analysts in the U.S. and South Korea, however, warn the declaration would inevitably lead to discussion of removing about 28,000 U.S. troops who serve under U.N. auspices in South Korea, a possibility that alarms those skeptical of North Korea’s willingness to ever give up its nuclear weapons.

“You have to question why North Korea is pushing so hard for that end-of-war declaration,” said Canadian Lt. Gen. Wayne Eyre, deputy commander of the U.N. command tasked with keeping peace between the Koreas, speaking at a talk in Washington in October. “Even if there is no legal basis for it, emotionally, people would start to question the presence and continued existence of the United Nations command. And it’s a slippery slope to then question the presence of U.S. forces on the peninsula.”

To declare the Korean War over with North Korea still in possession of nuclear weapons and ballistic missiles would be “putting the cart before the horse,” said Victor Cha, who led the talks with North Korea under President George W. Bush.

“That’s not peace. That is a fake peace,” Cha said by phone in a news briefing from the Washington-based Center for Strategic and International Studies. “You can’t just politically declare peace while the situation on the ground has not changed. That is actually dangerous.”

U.S. officials have repeatedly insisted that an end-of-war declaration and the drawdown of U.S. troops are separate matters. Withdrawal of American forces is “not the subject of discussions” and has never been on the table with North Korean negotiators at any stage, senior U.S. officials said last week in a briefing to reporters, speaking on condition of anonymity.

Not everyone is buying it.

“They’re just saying that to put South Korea at ease. It might start that way, but it’ll inevitably lead to talk of withdrawing troops,” said Nam Sung-wook, professor at Korea University’s department of diplomacy and unification. “Its main function, deterrence against North Korea, will be undermined.”

Nam also doubted a peace declaration would get any meaningful concessions out of North Korea.

“It doesn’t bring money into their coffers. What they need is immediate cash flow,” he said.

It was South Korea that refused to sign the 1953 armistice. At the time, it was reluctant to recognize North Korea as a legitimate entity and wanted to keep fighting until Korea was unified. South Korea’s current president, Moon Jae-in, though, has repeatedly urged the U.S. to declare the Korean War over, saying he believed a peace declaration was a necessary step to denuclearizing North Korea.

For people living on the Korean peninsula, the declaration, practically speaking, wouldn’t be any different from the armistice agreement. Moon, who has been championing Trump’s engagement with North Korea, has said the symbolic gesture would go a long way in giving North Korea the assurance it needs to eventually give up its nuclear weapons.