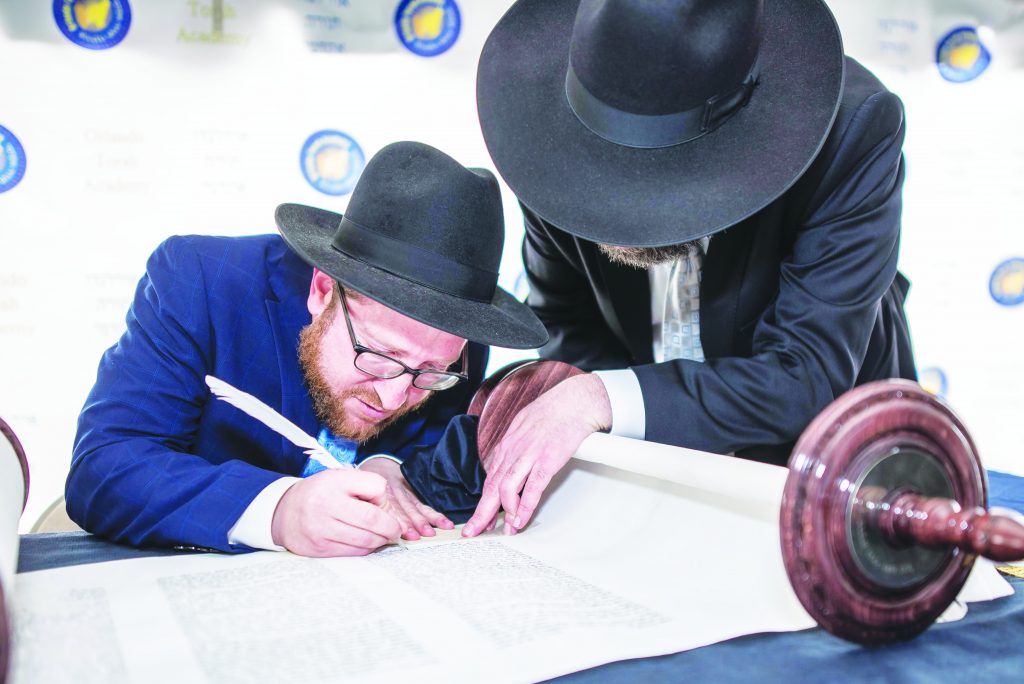 In a city known for its fantastic celebrations, Orlando has never witnessed one like this. On Sunday, 5 Adar I, over 250 people, including family, friends, talmidim, and bachurim from all over the world gathered together to celebrate a hachnasas sefer Torah at Orlando Torah Academy.

The celebration was the culmination of a yearlong project, undertaken by Rabbi Avraham Wachsman, founder and dean of Orlando Torah Academy, to write a sefer Torah in memory of his father, Harav Raphael Wachsman, zt”l.

Kesivas osiyos events were held throughout the year in Toronto, Chicago and New York, with the final letters being written Sunday in Orlando.

Harav Raphael Wachsman was the founder and Rosh Yeshivah of the world-renowned WITS Yeshiva in Milwaukee. For over 35 years, he was moser lev v’nefesh to build a yeshivah and nurture the talmidim that passed through its doors.

The bringing of this sefer Torah, the first for Orlando’s Torah community, into a Jewish day school imbued with a mission to be marbitz Torah, is a testament to the continuity of the legacy and vision to which Rav Wachsman dedicated his life.

The celebration started with finishing the writing of the last few lines with the sofer, Rabbi Betzalel Schur of Chicago. Out-of-town guests and locals had the opportunity, many for the first time in their lives, to write a letter in the Torah.

Bachurim from Yeshiva Tiferes Torah of Boca Raton, together with their Rosh Yeshivah, Harav Yehoshua Schloss, and from Yeshiva Toras Chaim, in Miami with their Rebbi, Rabbi Yehuda Bergida, drove up to participate and enhance the simchah.

Guests enjoyed a lavish buffet and were then treated to a few songs by the Orlando Torah Academy choir led by Rabbi Gavriel Wittlin, co-founder of OTA.

Rabbi Yehuda Schepansky welcomed all the guests and spoke about the core values of OTA. Rabbi Wachsman, in an emotional speech, then spoke of the importance of ensuring the Torah observance of the future generations of Klal Yisrael and how this applied to his father’s life and to the supporters and parents of OTA.

He then sat down to write the last letter, the “lamed” in Yisrael, to complete the beautiful new sefer Torah. Spirited dancing ensued as the Torah was carried underneath the chuppah and into the streets of Orlando. At one point, one of the Orlando sheriffs, a Yid guarding the parade, donned a yarmulke, and for the first time in his life held a Torah and danced. It was symbolic and demonstrated to all the koach of Torah to reach every Jewish neshamah and draw us closer to Hashem. Another local guest commented, “I have never seen or been a part of such an event. It was truly special.”

It was incredible to see the diversity of Klal Yisrael dancing with such simchah with the Torah: Rabbanim who dedicate their lives to learning and teaching Torah, budding talmidei chachamim from yeshivah, committed parents who send their children to OTA and many who had the opportunity to experience true kvod haTorah and simchas haTorah for the very first time.

After the parade, the Torah was then escorted into the school and placed in the aron kodesh. This hachnasas sefer Torah surely left an indelible mark on the Jewish community of Orlando. Its impact is much greater than anything magical, it’s the real thing and it’s eternal.