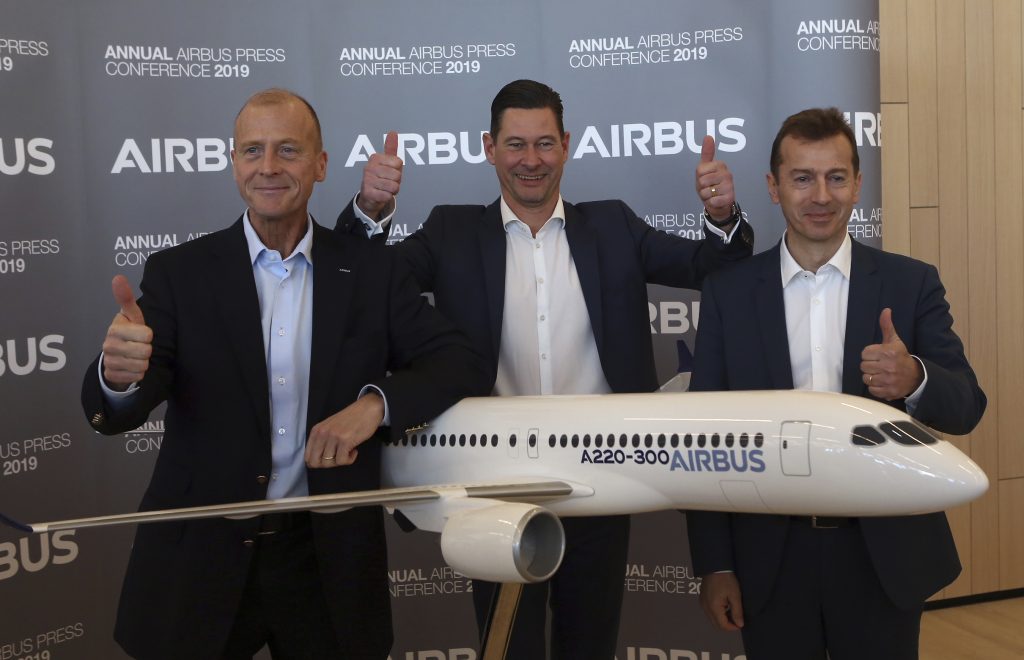 European plane maker Airbus said Thursday it will stop making its superjumbo A380 in 2021 for lack of customers, abandoning the world’s biggest passenger jet and one of the aviation industry’s most ambitious and most troubled endeavors.

Barely a decade after the double-deck, 500-plus-seat plane started carrying passengers, Airbus said that key client, Emirates airline, is cutting back its orders, and as a result, “we have no substantial A380 backlog and hence no basis to sustain production.”

The company, a European economic powerhouse, is also girding for serious disruption to its cross-continental manufacturing from a likely chaotic British exit from the EU next month. CEO Tom Enders, however, said Thursday that “We are getting signals that make me a little more optimistic that we’ll see a more orderly Brexit.” He wouldn’t elaborate.

The end of the young yet iconic jet is a boon for rival Boeing and an embarrassing symbolic blow for Airbus. A pall of mourning hung in the atmosphere Thursday at its headquarters in the southern French city of Toulouse — but there was also a hint of relief after years of straining to keep the A380 alive.

“It’s a painful decision for us,” Enders said. “We’ve invested a lot of effort, a lot of resources, a lot of sweat … but we need to be realistic.”

It’s also sad news for Emirates, which has the A380 as the backbone of its fleet, based out of Dubai, the world’s busiest airport for international travel.

When it started taking on passengers in 2008, the A380 was hailed for its roominess, large windows, high ceilings and quieter engines. Some carriers put in showers, lounges, duty-free shops and bars on both decks.

Airbus had hoped the A380 would squeeze out Boeing’s 747 and revolutionize air travel as more people take to the skies.

Instead, airlines have been cautious about committing to the costly plane, so huge that airports had to build new runways and modify terminals to accommodate it. The double-deck planes started flying in 2008.

The A380 had troubles from the start, including tensions between Airbus’s French and German management, and protracted production delays and cost overruns. Those prompted a company restructuring that cost thousands of jobs.

Among early detractors of the A380 was analyst Richard Aboulafia of Washington-based Teal Group, who said its demise “was inevitable.”

“But thanks to the strength of the market right now, and the strength of Airbus’s other products, the damage will not have a huge impact on the industry,” he told The Associated Press. “For Boeing, it has been a very long time since they needed to worry about the A380 as a competitive factor.”

But it also reported losses: In addition to the A380 hit, Airbus reported a charge of 436 million euros on the A400M, used by several European militaries — and another 123 million-euro charge for complying with ethics rules as the company faces fraud investigations in the U.S., Britain and France.

Airbus said it forecasts similar profits in 2019, in line with growth in the world economy and air traffic.

It promised airlines that it would still maintain the more than 230 A380s currently in flight, with Faury calling it a “benchmark” for the company even as its death is being programmed.

Emirates said Thursday it had struck a deal valued at $21.4 billion with Airbus to replace some A380s with A350 wide-bodies and smaller A330 planes.

Emirates has long been the largest operator of the A380. Before Thursday’s announcement, it had 162 of the jets on order.

“While we are disappointed to have to give up our order, and sad that the program could not be sustained, we accept that this is the reality of the situation,” Sheikh Ahmed bin Saeed Al Maktoum, the chairman and CEO of Emirates, said in a statement. “For us, the A380 is a wonderful aircraft loved by our customers and our crew. It is a differentiator for Emirates. We have shown how people can truly fly better on the A380.”

Industry experts initially expected A380s to long outlast the Boeing 747, which is celebrating its 50th birthday this year. But airlines seem to increasingly favor more middle-size planes for regional routes, notably in Asia, instead of the hulking A380s or even 747s, increasingly used as a cargo plane.