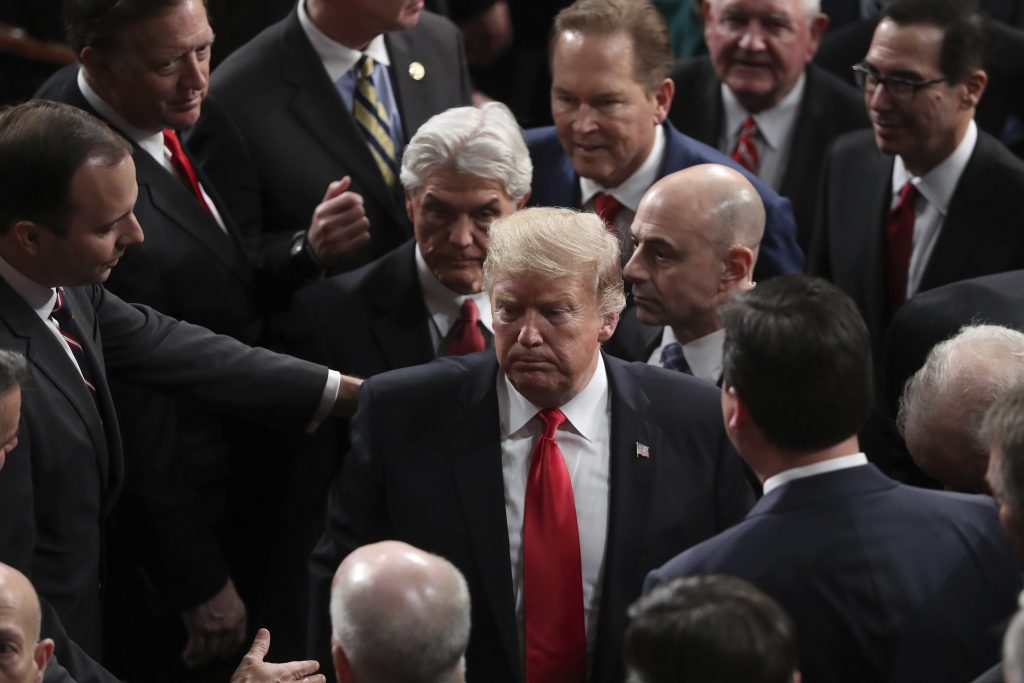 The contrasting pathways — with Trump set to appear before raucous supporters and Pelosi signaling compromise — came with just over a week until a Feb. 15 deadline for negotiators to reach agreement or potentially face a renewed partial government shutdown. House-Senate bargainers say their talks have become increasingly substantive and some lawmakers — including Pelosi herself — expressed hopes that negotiators might produce an accord as soon as Friday.

“If they come up with a bipartisan agreement, I’m happy to support it,” Pelosi (D-Calif.) told reporters. She said she hoped Trump would take “the same hands off” approach.

Democrats have been in a position of strength in the talks, after Republicans lost House control in November’s elections; Trump forced a record 35-day federal shutdown and surrendered without getting the $5.7 billion he’s demanded for a wall.

Senate Majority Leader Mitch McConnell (R-Ky.) has also given bargainers a green light to seek a deal that he’s said he hopes Trump would find “worth signing.”

If Pelosi and McConnell embrace a bipartisan agreement, it could isolate Trump and pressure him to accept it without re-escalating the fight. Trump has threatened a new shutdown or a declaration of a national emergency to access other budget funds if he’s not satisfied with a deal — steps members of both parties oppose.

Bargainers met Wednesday privately for nearly two hours with federal border patrol and customs officials to hear their recommendations on how to secure the Southwest border. But several lawmakers emerged with differing conclusions.

No. 2 Senate Democratic leader Richard Durbin said lawmakers were told the top priority was technology that could screen vehicles for drugs or migrants at border ports of entry.

“The dialogue is good. The tone is good. We’re talking about substance,” Shelby said.

He also said that in a phone conversation with Pelosi, “I just said, ‘Look, can we reach a yes on this in any way or are we wasting our time.’ She said, ‘No, keep working together,’ and she would like to see a legislative solution, the sooner the better.”

In comments that suggested a potential avenue for agreement, some lawmakers suggested that giving local officials a say would be pivotal.

“We can probably get there on some sort of enhanced barriers with local input,” said another negotiator, Rep. Henry Cuellar (D-Texas).

Democrats have proposed spending as much as $1.6 billion for border security including some types of physical barriers, but it remains unclear how much more money they’d accept as part of a deal. Cuellar said $5.7 billion for the wall is “not going to happen.”

Meanwhile, the White House said Trump will hold his first campaign rally of the year next Monday in El Paso, Texas. His campaign manager, Brad Parscale, tweeted that the rally will be held “less than 1000 feet from the successful border fence that keeps El Paso safe!”

In his State of the Union address Tuesday, Trump cited El Paso as once having “extremely high rates of violent crime”. He asserted that with its wall, “El Paso is one of the safest cities in our country.”

Rep. Veronica Escobar ( D-Texas) tweeted that “El Paso has been one of the safest cities in the nation long before the wall was built in 2008. #WallsDontWork.”

“El Paso is safe due to its people, the good community relations with law enforcement, and the trust of all communities in our local institutions,” Fernando Garcia, executive director of the Border Network for Human Rights, said in a statement. “El Pasoans should be offended by the way the president used our community to advance his racist and xenophobic agenda.”