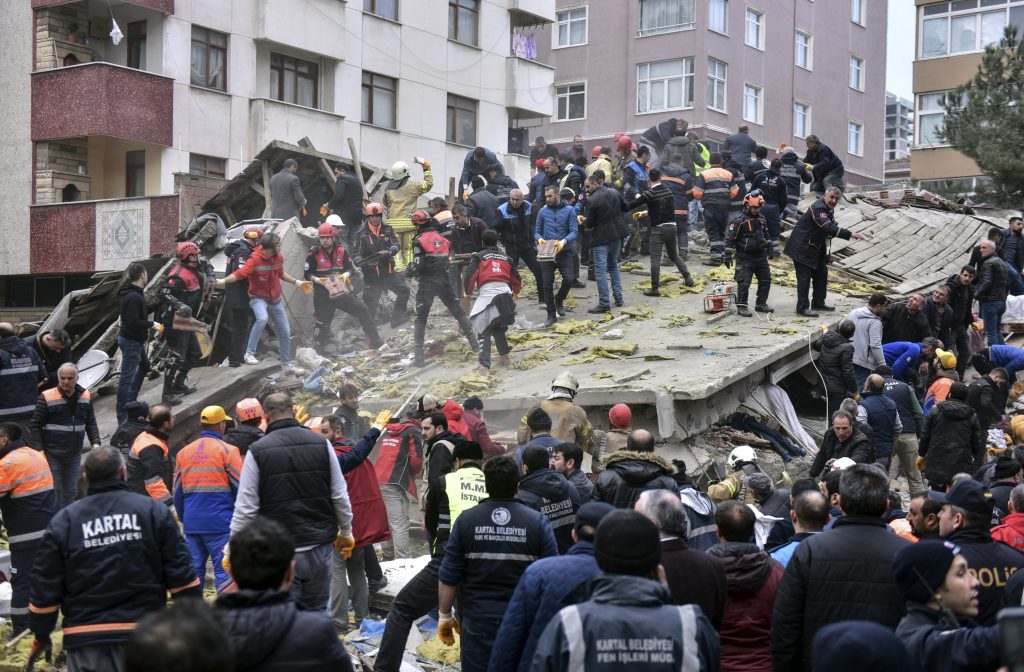 An eight-story building collapsed in Istanbul on Wednesday, killing at least two people, Turkish officials said. Rescue workers pulled six others out of the rubble and were working to free more who were trapped.

The building, which had 43 people living in 14 apartments, had a street-level ground floor and seven higher floors, Istanbul Gov. Ali Yerlikaya said, adding that the top three floors had been built illegally.

It was not immediately clear how many people were trapped in the wreckage.

Former Prime Minister Binali Yildirim told reporters at the site that six people were pulled out of the rubble alive and rescuers had made contact with four others still inside the wreckage.

“Racing against time, the teams are working, making great sacrifices,” said Yildirim, the current parliament speaker who is running for mayor of Istanbul in Turkey’s March 31 local elections.

“We will work without interruption until the search and rescue operation is complete,” Yerlikaya, the governor, told reporters. “Our prayers are with our brothers and sisters who are inside. Our hope is that we will bring them out safely.”

The chief prosecutor’s office said it launched an investigation into the collapse of the 27-year-old building. Yildirim said neighboring buildings had been evacuated in case they were also damaged.

The collapse took place about 4 p.m. on the Asian side of Istanbul in the mostly residential Kartal district. Security camera footage on HaberTurk television showed several people, including schoolchildren with backpacks, running away from the site as the building tumbled down and a cloud of dust engulfed the area.

“We rushed out as soon as we heard a loud noise. When we got out, we saw that the building had collapsed,” resident Kenan Ayyildiz told the news channel.

Authorities sealed off the area as crowds gathered to watch or help with the rescue operation.

Turkey’s broadcasting watchdog later announced that the prosecutor’s office had ordered a media blackout, citing the investigation into the collapse. Turkish television stations then immediately ended their live broadcasts from the scene.