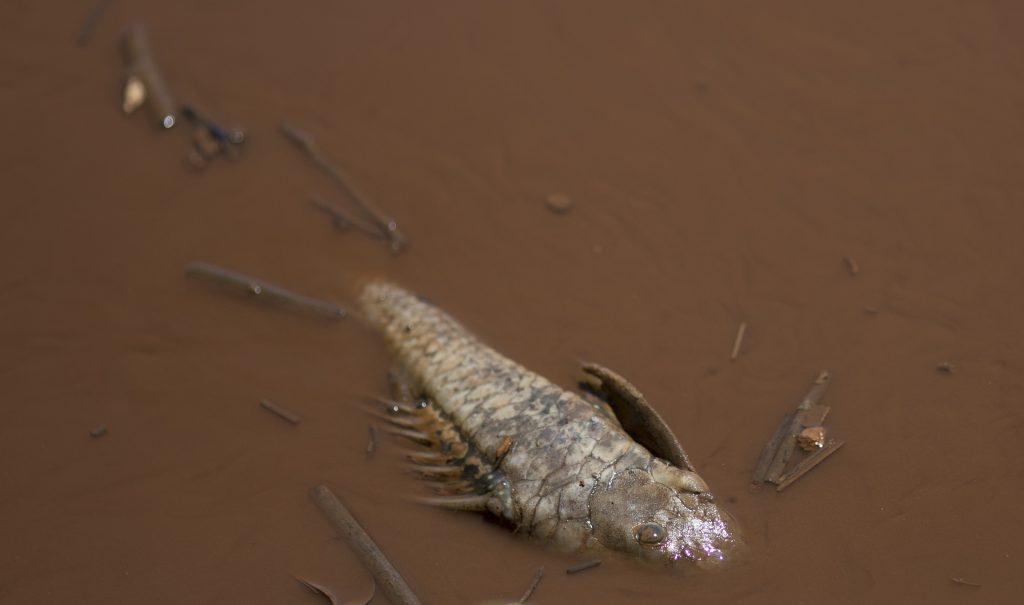 A torrent of mining waste unleashed by a dam breach that killed at least 84 people in southeastern Brazil is now heading down a small river with high concentrations of iron oxide, threatening to contaminate a much larger river that provides drinking water to communities in five of the country’s 26 states.

The release of the muddy waste has already turned the normally greenish water of the Paraopeba River brown about 11 miles downstream from the southeastern city of Brumadhinho, where the broken dam is.

The chief of an indigenous community said Tuesday that Brazilian environmental agents warned his community to stop fishing in the river, bathing in it and using its water for the plants they cultivate as food.

The Paraopeba flows into the much larger Sao Francisco River, which provides drinking and irrigation water to hundreds of municipalities and larger cities such as Petrolina, in the state of Pernambuco, 870 miles from Brumadhino, which is in Minas Gerais State.

As grieving relatives of the dead bury family members and searchers continue looking for 276 people who are missing, Brazilian authorities and companies involved with river water management are trying to figure out how to prevent the contamination.

Their main focus is the Retiro Baixo hydroelectric dam and plant complex about 186 miles from Brumadinho. Officials and environmentalists hope the dam’s reservoirs can be used to isolate the muck so it can be cleaned before that water is released to head farther downstream to the Sao Francisco River.

“A lot of communities and cities in different states depend on that river to live,” said Carlos Rittl, a director at Brazil’s Climate Observatory environmental nonprofit group.

The “wave” of muddy water and waste is expected to reach the dam between Feb. 5 and Feb. 10, according to the Geological Survey of Brazil, which is monitoring the velocity of the mine waste on a daily basis.

Technicians for Furnas, the company that operates the Retiro Baixo dam, are also monitoring the sludge moving toward the plant. They have concluded it poses no structural risk to the dam, the company said in a statement.

The reddish-brown mud is currently moving at about 0.6 mph and is destroying vegetation and aquatic life, according to the Geological Survey of Brazil.

It was unleashed Friday when the dam storing iron ore waste for big Brazilian mining company Vale SA breached. Officials warned Tuesday that the death toll was expected to rise significantly, with no one rescued alive since Saturday.

In the Pataxco Indian village near the Paraopeba River, dead fish and refuse like plastic sandals were visible along its banks.

“We used the river to take baths, to fish, to water our plants and now we can’t do any of that,” said village chief Hayo, who uses only one name and wore a large feathered headdress and a red and black-beaded necklace. “We can’t even water our plants because they say it damages the soil.”

Vale said in a statement that it planned to install a fabric barrier to retain residues where the river reaches the city of Para de Minas, about 25 miles from Brumadinho. The company may also build levees near the Brumadinho mine in an effort to prevent the sediment from moving.

Among those hired to try to keep the waste in place were experts who helped the company when a dam at another iron ore mine ruptured in 2015, killing 19 people.

Rivers contaminated by mining tailings, which contain high levels of fine particles of iron ore or other heavy metals, can end up contaminated for years or decades, said Joao Paulo Machado Torres, a professor who heads the Environmental Biophysics program at the Federal University of Rio de Janeiro.

He sampled water from the river contaminated by Vale’s 2015 dam failure, which left 250,000 people without drinking water and killed thousands of fish.

Efforts are still under way to clean up the environmental damage from that dam failure, and Torres said repairing ecological damage from Friday’s dam breach will take “a huge effort to bring any sort of life back.”