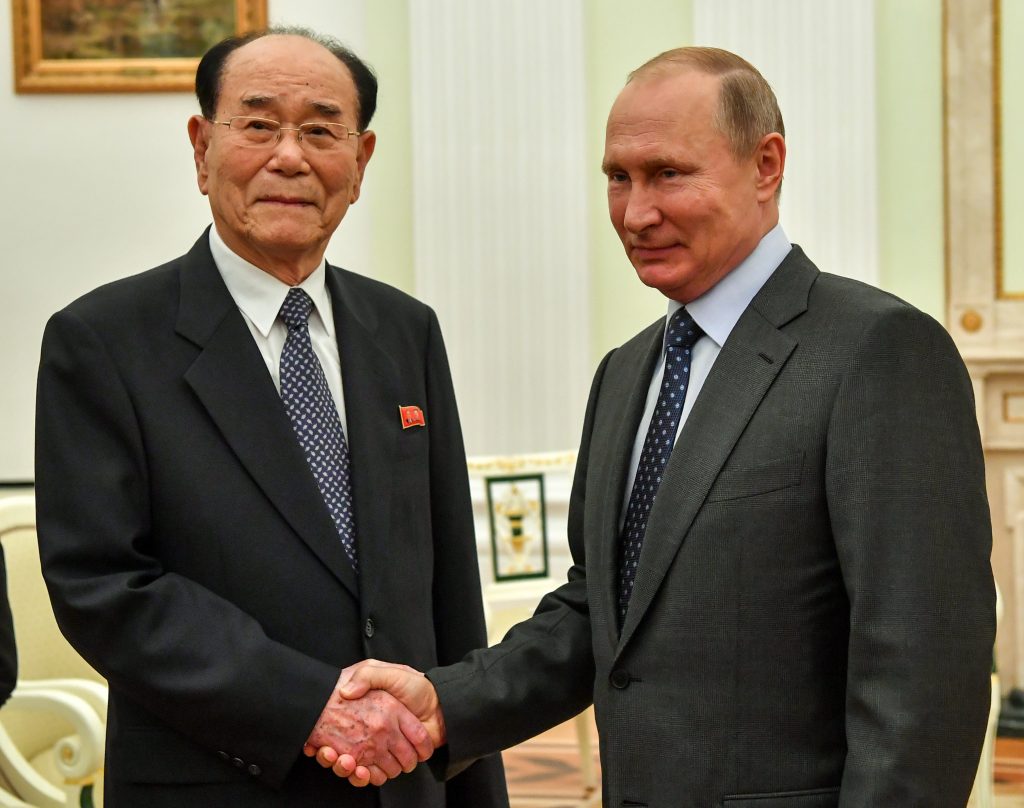 Russian officials made a secret proposal to North Korea last fall aimed at resolving deadlocked negotiations with the Trump administration over its nuclear weapons program, said U.S. officials familiar with the discussions.

In exchange for dismantling its nuclear weapons and ballistic missiles, Moscow offered the country a nuclear power plant.

The Russian offer, which intelligence officials became aware of in late 2018, marks a new attempt by Moscow to intervene in the high-stakes nuclear talks as it reasserts itself into a string of geopolitical flash points from the Middle East to South Asia to Latin America. Its latest bid is expected to unsettle Chinese and U.S. officials wary of granting Moscow an economic foothold on the Korean Peninsula.

As a part of the deal, the Russian government would operate the plant and transfer all byproducts and waste back to Russia, reducing the risk that North Korea uses the power plant to build nuclear weapons while providing the impoverished country a new energy source.

“The Russians are very opportunistic when it comes to North Korea, and this is not the first time they’ve pursued an energy stake in Korea,” said Victor Cha, a former White House staff member who the Trump administration considered nominating last year to serve as U.S. ambassador to South Korea.

“Previous administrations have not welcomed these Russian overtures, but with Trump, you never know because he doesn’t adhere to traditional thinking,” Cha said.

After months of delays and canceled meetings, talks between the United States and North Korea have gained new momentum with the announcement of a second summit between President Trump and North Korean leader Kim Jong Un planned for late February.

Trump has been increasingly upbeat about another round of talks and frustrated by what he views as unfair media coverage of his diplomacy. While he touts North Korea’s suspension of missile launches and nuclear tests, critics have noted a lack of steps on the part of Pyongyang to reduce its nuclear capability.

“With North Korea, we have a very good dialogue,” Trump said this month. “I’m going to not go any further than that. I’m just going to say it’s very special.”

The State Department, White House, CIA, Office of the Director of National Intelligence and the Russian Embassy in Washington declined to comment on the secret proposal. It is unclear whether the offer is still under negotiation or if it has impacted the discussions between Washington and Pyongyang.

If the Kim regime is interested, Russian officials have asked that Pyongyang provide a realistic timeline for when it could denuclearize, said people familiar with the discussions. The CIA has assessed that the Russian power plant would produce a very limited amount of weaponizable byproduct, said one official, who like others interviewed spoke on the condition of anonymity to describe sensitive information.

Experts said the idea borrows from the original blueprint of the failed 1994 accord between North Korea and the Clinton administration known as the Agreed Framework, which sought to accommodate North Korea’s energy needs.

“It was technically possible for the U.S. to provide light water reactors to North Korea under the Agreed Framework because Pyongyang agreed to remain a party of the Treaty on Non-Proliferation of Nuclear Weapons and receive safeguards from the International Atomic Energy Agency,” said Duyeon Kim, a Korea expert at the Center for a New American Security.

Bolton, who was undersecretary of state for arms control under Bush, now serves as Trump’s national security adviser. But the president has not followed Bolton’s hard-line approach to the negotiations.

Diplomats and analysts familiar with Russia’s actions said Moscow has a longtime interest in creating an energy link between Siberia and East Asia, as well as being viewed as a problem-solver for geopolitical crises.

“They want to be a player on the peninsula for economic and security reasons,” said Ken Gause, director of the adversary analytics program at CNA, a defense think tank. “They have aspirations to build a gas pipeline that extends through North Korea all the way down to South Korea, for example. They share a border with North Korea and want a say in how security in Northeast Asia evolves.”

Gause added that he did not think the North Koreans would relinquish their nuclear program until they normalize relations with the United States and end the decades-long conflict between the two nations. “The Russians can do whatever they can to facilitate the situation, but if the United States continues to be adversarial, the North Koreans are going to be very reluctant to take that deal,” he said.

During negotiations with the George W. Bush administration, Russia proposed providing a light water reactor to North Korea in exchange for the dismantlement of North Korea’s plutonium production facilities, said Cha, who served in the Bush White House. “The U.S. was opposed to this,” he said, because it wanted Pyongyang to accept an alternative energy solution that did not include nuclear power.

“I imagine the Russians want to provide a light water reactor, make money off of it, and get a foothold on the energy links in East Asia,” said Cha, who had not been briefed on the Russian proposal.

One diplomat who focuses on Russia issues said Moscow’s involvement could help it argue against sanctions placed on it for interventions in Ukraine. “They may be trying to deal themselves back into the global game,” the diplomat said. “‘We helped save the world from North Korean nukes, so why the continued sanctions?'”

In the past, U.S. officials have opposed a major role for Russia in the denuclearization process due to a long-standing distrust of Moscow, Cha said. China, a key player in the negotiations, has also opposed a prominent Russian energy role, though that could appeal to Trump.

“If this is part of a final deal, Trump could be OK with it if it pokes China in the eye,” said Cha. “The Chinese don’t want the Russians on the peninsula, so if they’re going to be the primary energy supplier, they won’t like it.”

Russia’s offer to North Korea, in late October, came as negotiations between Washington and Pyongyang deadlocked over when North Korea should disclose an inventory of its nuclear program.

But the tempo of the discussions improved earlier this month with a visit to Washington by Kim Yong Chol, a former spy chief and North Korea’s lead negotiator in the talks. In meetings with Secretary of State Mike Pompeo, Kim told officials North Korea had appointed Kim Hyok Chol as the new counterpart for America’s envoy for the talks, Stephen Biegun, said two people familiar with the discussions.

The personnel change was welcomed by the U.S. side, which has struggled for months to secure meetings between Biegun and his previous counterpart, Choi Sun Hee. Following Pompeo’s meetings with Kim, Biegun met with Kim Hyok Chol for the first round of working-level talks between the Trump administration and the North Koreans.