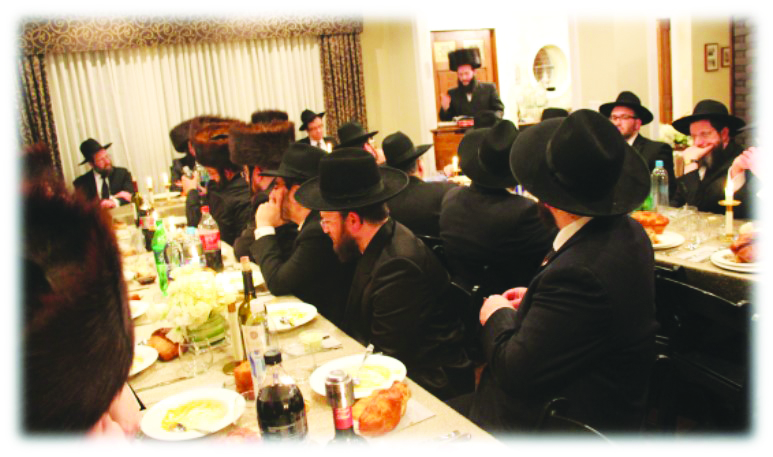 On a recent Motzoei Shabbos, Kollel Zichron Yitzchok Zev/Chassidishe Kollel made a siyum on Hilchos Shabbos.

The siyum was graciously hosted by Rabbi and Mrs. Elli Leibenstein in their home, who put in a lot of effort to set up the siyum in a nice, befitting manner. The siyum was attended by many of the kollel members’ chavrusos as well.

Harav Avrohom Lipschutz, Mashgiach of Telshe Yeshiva of Chicago, captivated the yungeleit with a powerful drashah. Rav Lipschutz emphasized the importance of the wives in the success of the kollel, and that it is only possible for the kollel to reach such a milestone because of their devotion and excitement towards the men’s learning.

Rav Lipschutz then talked about how fortunate the Chicago community is to have the Chassidishe Kollel, and how much hakaras hatov the community must have towards the kollel yungeleit. Having a Chassidishe Kollel in a community brings a special feeling of excitement to Torah and mitzvos.

Rav Lipschutz related a story from when he was a young bachur. One day, while walking in Monsey holding his tefillin, an elderly chassidishe man stopped him and said, “Bachur, tefillin you hold close to your heart, not like a lunchbox.”

Rav Lipschitz said that he has carried this line through his entire life. Chassidim truly add to the world of Torah in Chicago. Rav Lipschutz ended off by explaining the importance of learning in the same style of the kollel, which combines learning in-depth with the practical applications of halachah.

At the siyum, Rabbi Zev Friedlander, one of the kollel yungeleit, made a siyum on Masechos Shabbos. Rabbi Friedlander thanked Rabbi Zalman Leib Eichenstein, Rosh Kollel, for all the effort that he puts into motivating the yungeleit to succeed.

Rabbi Friedlander also thanked the hanhalah of the kollel and commented that he feels a special connection because when his grandfather first came to Chicago, he met Reb Shmuel Yaakov Meystel’s father — Reb Yitzchok Zev, after whom the kollel is named, who gave him fabric so that he was able to start his own business.

Rabbi Elli Leibenstein gave a beautiful dvar Torah and expressed his hakaras hatov to the Zidichover Rebbe, shlita, for his constant guidance, and for bringing the Rosh Kollel to Chicago. He also thanked the Rosh Kollel for everything that he has brought to Chicago.

He said that when he was asked to host the siyum he had no hesitation and was so happy to be able to give back to the kollel in this manner.

The mesibah concluded with leibedig dancing, with a real sense of excitement over the kollel’s accomplishments.