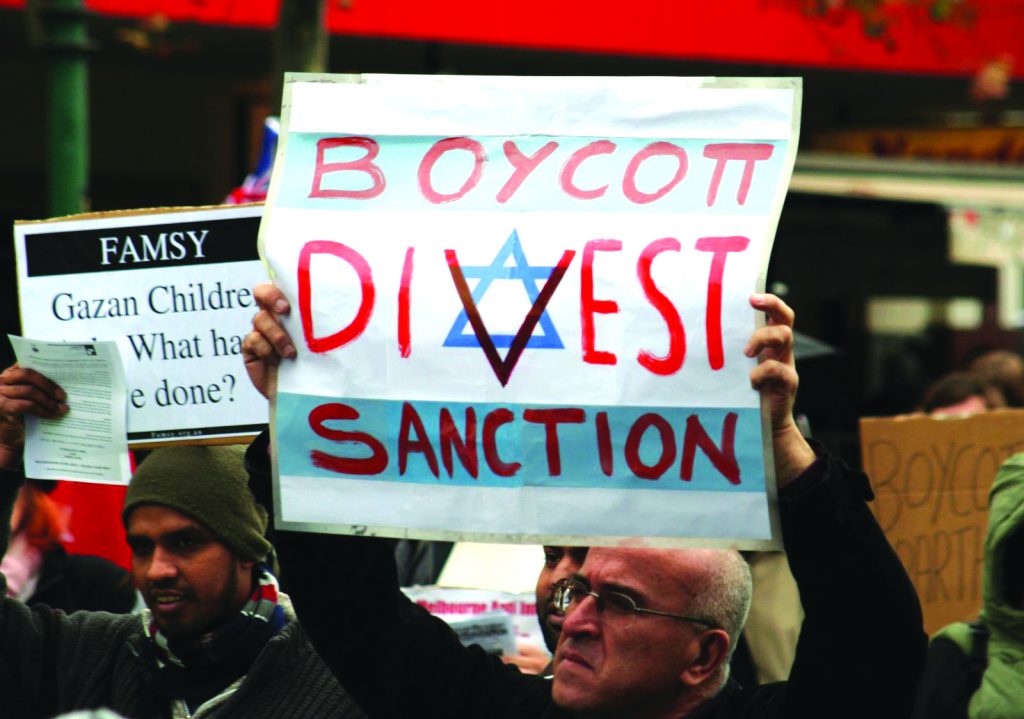 Is there such a concept as chazakah in government? Opponents of BDS hope not. After failing three times to pass through Congress, anti-BDS legislation aimed at granting federal protections to states now sits languishing on the Senate floor. Democrats blocked the bill from coming up for a vote, claiming the government should reopen before doing business. But is the bill really a casualty of the government shutdown or of something far more nefarious?

The BDS legislation, part of a larger bill called S.1 that includes sanctioning the Syrian regime and granting military aid to Israel, was dead before arrival to the Senate Chamber. Essentially the bill would permit state and local governments to boycott companies that boycott Israel. Proposed by Senator Marco Rubio, it hit a brick wall of opposition by Democrats intent on preventing the building of a different kind of wall. But it became obvious fairly quickly that it might be the content of the bill and not the timing that irked too many Democrats.

As if on cue, Senator Bernie Sanders immediately tweeted the Democrat progressive slant of the bill. “It’s absurd,” he said, “that the first bill during the shutdown is legislation which punishes Americans who exercise their constitutional right to engage in political activity.”

Representative Rashida Tlaib’s comments were all the more shocking for the silence with which they were received by fellow Democrats. Tlaib is the Michigan congresswoman who was sworn in wearing a traditional Palestinian robe and who displayed a map on her first day with a note posted over Israel that read “Palestine.” She slammed the BDS bill as being “anti-First Amendment” and tweeted, “They forgot what country they represent. This is the U.S. where boycotting is a right and part of our historical fight for freedom and equality.”

Unlike Republican colleagues who immediately and roundly reprimanded Rep. Steve King last week for his white supremacist remark, Democrats did little to counter Tlaib’s Jewish smear. It was Rubio who slammed Tlaib’s dual loyalty canard, calling it “a typical anti-Semitic line.” He suggested that “a significant number of Senate Democrats now support BDS and Dem leaders want to avoid a floor vote that reveals that.”

Rubio might be onto something. Minnesota Muslim Rep. Ilhan Omar, who accused Israel of “evil doings” and of being an “apartheid regime,” continues to openly advocate for BDS. Forget a reprimand. For that she was rewarded by Democrat leaders with a spot on the House Foreign Affairs Committee.

Are politics eclipsing anti-Semitism? Senator Gillibrand dumped her support for anti-BDS measures, claiming it infringed upon free speech. And Senate Minority Leader Charles Schumer, who only last year labeled BDS as “unquestionable anti-Semitism,” commented that it was “unfortunate” that Republicans “have decided to use Israel to play politics.” Perhaps it’s closer to the truth to say Democrats have decided to use politics to play Israel a dirty trick.

Charges of dual loyalty have long been convenient code words indicating anti-Semitism is at play. Some on the left have taken to branding AIPAC, for example, as a “Jewish lobby.” Leftist Democrats, eager to condemn the Israeli “occupiers,” have distanced themselves from the AIPAC convention, which used to be a political rite of passage. Sanders skipped the convention last year and more Democrats are expected to follow suit this year.

This trend stands in stark contrast to other ethnic groups in America. Leftists have long been ramming the dual loyalties of every national and cultural type down the collective American throat in an effort to divide and conquer. Progressives have discovered the power of the hyphen, and have transformed a country of Americans into a country of African-Americans, Arab-Americans, Hispanic-Americans, Asian-Americans and Native-Americans.

But the same multi-cultural crowd that celebrates Cinco de Mayo won’t be marching down Fifth Avenue in the Israel Day Parade. The Women’s March, while finally being rejected by the DNC, remains a powerful political force of resistance, incapable of resisting anti-Semites like Farrakhan. And political activists on the left, while denying that they are anti-Semitic, shut down dissenting opinions, especially in the media and on college campuses, and especially when it comes to Israel.

Suddenly, BDS supporters who silence Israel advocates are crying foul about free speech. Had Rubio introduced legislation protecting the rights of Muslim, African or Hispanic countries, chances are that the Democrats would have defied the shutdown to vote yea. Not so for protecting Israel from legal warfare.

Marc Greendorfer of the Zachor Legal Institute, which has taken the lead in the legal battle against BDS, is not surprised. In a conversation, he points to “Democrats politicizing the BDS provision, an enactment of common-sense anti-discrimination laws, in order to appease their increasingly radical, left wing, pro-BDS, anti-Israel base.” Greendorfer says, “Democrats have utterly abandoned fighting anti-Semitism and are promoting it with their support of BDS and their refusal to condemn the legions of Democrats who embrace anti-Semitic groups.”

Zachor’s research has been cited by U.S. governmental and non-profit organizations and the Israeli Supreme Court, and Greendorfer’s fight against BDS activity has been instrumental in enacting U.S. anti-discrimination laws. He believes things are only going to get worse. “I think that Tlaib is absolutely the face of the new Democrat Party.”

Greendorfer’s disturbing commentary rankles because of the truth behind it, especially as one leftist Democrat after another troops into Iowa ahead of the 2020 election. Any excuse that extremists among the Democrat Party are a minority is belied by the majority’s refusal to condemn them. And it underscores the urgency to fight back, lest another government official post a note over Israel on his map too. n