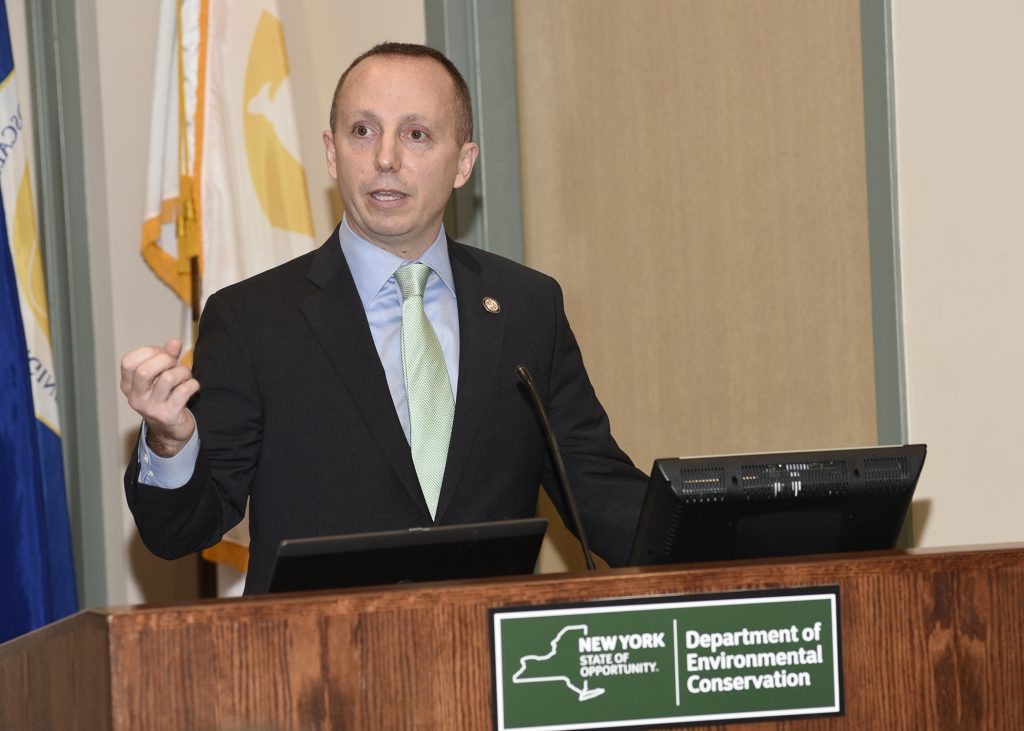 New York state’s environment is being threatened by Donald Trump’s policies, with the president’s efforts to rollback longstanding regulations constituting “an unprecedented assault on the environment,” a top Cuomo administration testified Wednesday at a state budget hearing.

“We stand in complete defiance of the president,” Department of Environmental Conservation Commissioner Basil Seggos said while giving 2½ hours of testimony to a joint public hearing held by the Assembly and Senate.

Seggos’ comment echoed those made recently by Gov. Andrew Cuomo, who has declared open defiance of Trump administration policies he deems harmful to New York.

Among Cuomo’s environmental conservation proposals: banning single-use plastic bags given to store customers at point of sale and expanding the state’s bottle bill to include sports drinks and other containers currently not required to have a 5-cent deposit.

Lawmakers questioned Seggos on those issues and others, including the state’s efforts to deal with the challenges brought on by climate change. Among the initiatives is statewide carbon neutrality, with Cuomo’s budget plan calling for generating 100 percent of New York state’s energy from renewable sources by 2040.

Legislators also queried Seggos about Cuomo’s proposal to use millions from the $300 million Environmental Protection Fund to pay DEC and state parks staff. The fund typically has been used for capital projects such as improvements to parks, waterfronts and wastewater treatment infrastructure. Lawmakers and environmental conservation advocates oppose dipping into the EPF for other purposes.

Cuomo’s proposal will “nickel and dime” the fund, according to Peter Iwanowicz, executive director of Environmental Advocates of New York, one of more than two dozen groups signed up to give testimony.

Seggos, who’ll soon depart the DEC after leading the agency since 2015, was the opening witness for the first of 13 public hearings on Cuomo’s budget scheduled over the next three weeks. Among the other hearing topics are transportation, education, economic development and taxes.