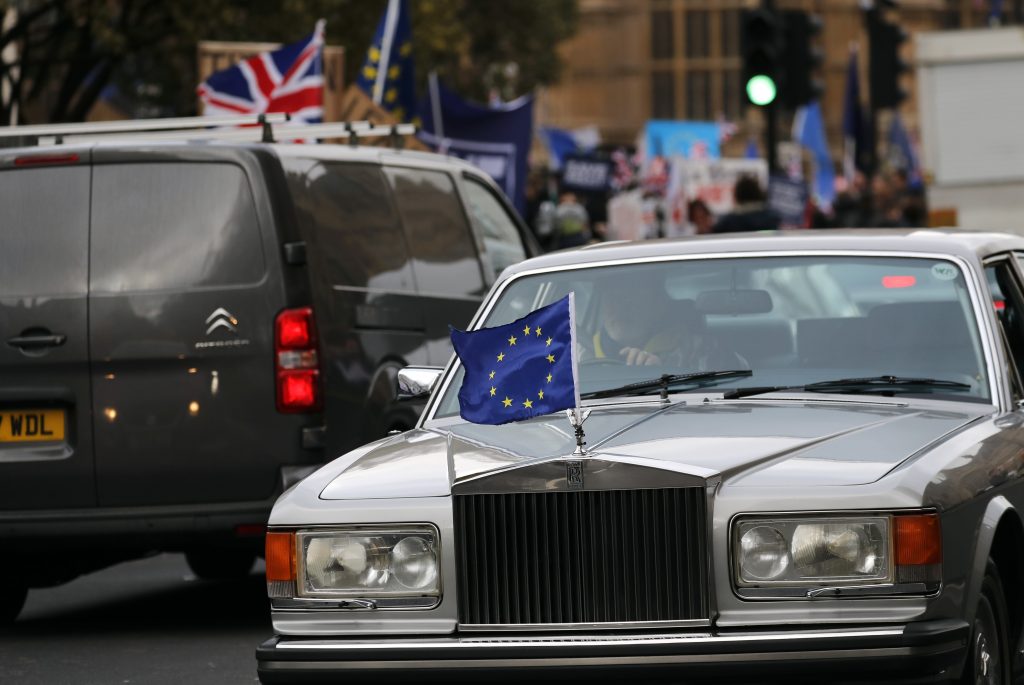 British lawmakers on Tuesday overwhelmingly rejected Prime Minister Theresa May’s divorce deal with the European Union, plunging the Brexit process into chaos and leading to a no-confidence vote in her government.

Moments after the vote, PM May said it was only right to test whether the government still had lawmakers’ support to carry on. Lawmakers will vote Wednesday in a no-confidence motion from opposition leader Jeremy Corbyn that could trigger a national election.

The House of Commons’ 432-202 vote against May’s plan was widely expected, but it was still devastating for her fragile leadership. It came after more than two years of political upheaval — and was the biggest defeat for a government in the House of Commons in more than a century.

The vote means further turmoil for British politics only 10 weeks before the country is due to leave the EU on March 29. It is not clear if it will push the government toward an abrupt “no-deal” break with the EU, nudge it toward a softer departure, trigger a new election or pave the way for a second referendum that could reverse Britain’s decision to leave.

PM May, who leads a fragile Conservative minority government, has made delivering Brexit her main task since taking office in 2016 after the country’s decision to leave the EU.

“This is the most significant vote that any of us will ever be part of in our political careers,” she told lawmakers as debate ended. “The time has now come for all of is in this House to make a decision, … a decision that each of us will have to justify and live with for many years to come.”

But the deal was doomed by deep opposition from both sides of the divide over U.K.’s place in the bloc. Pro-Brexit lawmakers say the deal will leave Britain bound indefinitely to EU rules, while pro-EU politicians favor an even closer economic relationship with Europe.

The government and opposition parties ordered lawmakers to cancel all other plans to be on hand for the crucial vote..

As lawmakers debated in the chamber, there was a cacophony of chants, drums and music from rival bands of pro-EU and pro-Brexit protesters outside. One group waved blue-and-yellow EU flags, the other brandished “Leave Means Leave” placards.

PM May postponed a vote on the deal in December to avoid certain defeat, and there were few signs in recent days that sentiment had changed significantly.

The most contentious section of the deal was an insurance policy known as the “backstop” designed to prevent the reintroduction of border controls between the U.K.’s Northern Ireland and EU member Ireland.

Assurances from EU leaders that the backstop is intended as a temporary measure of last resort completely failed to win over many British skeptics, and the EU is adamant that it will not renegotiate the 585-page withdrawal agreement.

Arlene Foster, who leads Northern Ireland’s Democratic Unionist Party — May’s parliamentary ally — said her party voted against the deal because of the backstop.

“We want the PM to go back to the EU and say ‘the backstop must go,'” Foster said.

Parliament has given May until Monday to come up with a new proposal. So far, May has refused publicly to speculate on a possible “Plan B.”

Some Conservatives expect her to seek further talks with EU leaders on changes before bringing a tweaked version of the bill back to Parliament, even though EU leaders insist the agreement cannot be renegotiated.

European Commission president Jean-Claude Juncker returned Tuesday to Brussels to deal with Brexit issues arising from the vote, amid signals May might be heading back to EU headquarters on Wednesday.

An EU official, who asked not to be identified because of the developing situation, said that it was “Important that he is available and working in Brussels during the coming hours.”

May had argued that rejecting the agreement would lead either to a reversal of Brexit — overturning voters’ decision in the 2016 referendum — or to Britain leaving the bloc without a deal. Economists warn that an abrupt break from the EU could batter the British economy and bring chaotic scenes at borders, ports and airports.

Business groups had appealed to lawmakers to back the deal to provide certainty about the future.

Mike Hawes, chief executive of the Society of Motor Manufacturers and Traders, said parliamentarians “hold the future of the British automotive industry — and the hundreds and thousands of jobs it supports — in their hands.”

“Brexit is already causing us damage in output, costs and jobs, but this does not compare with the catastrophic consequences of being cut adrift from our biggest trading partner overnight,” he said.

Amid the uncertainty, some members of Parliament from both government and opposition parties are exploring ways to use parliamentary procedures to wrest control of the Brexit process away from the government, so that lawmakers by majority vote could specify a new plan for Britain’s EU exit.

But with no clear majority in Parliament for any single alternate course, there is a growing chance that Britain may seek to postpone its departure date while politicians work on a new plan.