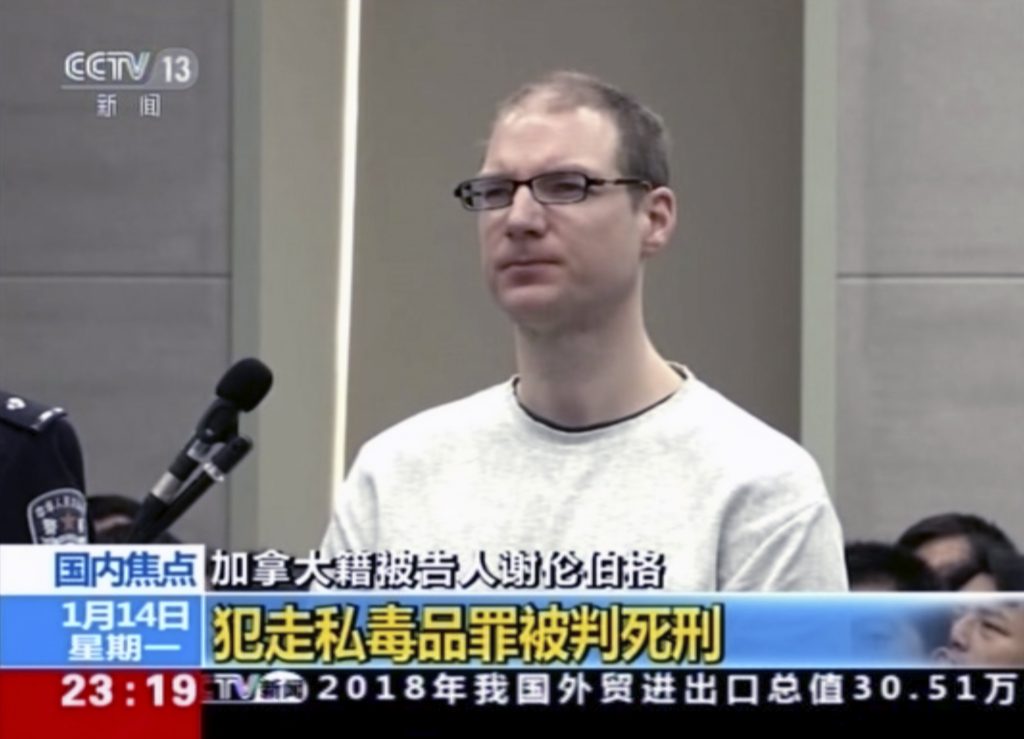 Canadian Prime Minister Justin Trudeau on Monday expressed “extreme concern” about China’s conduct after a Chinese court sentenced a Canadian man to death in a hasty retrial ordered not long after the arrest of a Chinese technology executive in Vancouver.

Robert Lloyd Schellenberg’s new sentence adds a new element to a diplomatic standoff over the arrest in Canada of Huawei Technologies’ chief financial officers on U.S. charges and the subsequent detention in China of two Canadians on security charges.

In this strongest-yet statement on the crisis, PM Trudeau suggested he sees Schellenberg’s new sentence as a political move.

“It is of extreme concern to us as a government – as it should be to all our international friends and allies – that China has chosen to begin to arbitrarily apply a death penalty,” he told reporters in Ottawa.

Last month, Chinese authorities detained Michael Kovrig and Michael Spavor, two other Canadians living in China, on suspicion of national security crimes. They highlighted Schellenberg’s case, and the prospect of putting him to death shortly thereafter.

Schellenberg, 36, was arrested in 2014 and was sentenced to a 15-year prison term for smuggling drugs.

His case went largely unnoticed until a retrial where, amid the escalating conflict between Canada and China, prosecutors said new evidence implicated the Vancouver native in a drug trafficking operation.

This month, the Chinese government took the rare step of inviting foreign media to attend his appeal hearing – prompting speculation that Beijing wanted to use Schellenberg’s case to exert pressure on Ottawa to free Meng.

“The procedures in Mr. Schellenberg’s case would be unusual even if he was a Chinese national. The fact that he is a Canadian, combined with the welcoming of foreign media to view court proceedings, makes it downright suspicious,” said Margaret Lewis, a law professor at Seton Hall University.

The Dalian Intermediate People’s Court on Monday announced Schellenberg’s new sentence in an online statement that detailed how he conspired with three others to pack the drugs in tires to ship to Australia. The statement did not describe Schellenberg’s defense; he has previously said he was framed.

If he chooses, Schellenberg could appeal again within 10 days, the court said. His case is expected to be reviewed by higher courts before he is put to death.

Spokesmen for China’s Foreign Ministry have rejected accusations that political motivations are driving the treatment of the Canadian detainees, maintaining that their cases have been handled in accordance with Chinese law.

But comments by the Chinese ambassador to Canada, Lu Shaye, have appeared to acknowledge that Beijing took “self-defense” actions in response to Meng’s arrest.

In a fiery op-ed published last week in the Hill Times, an Ottawa newspaper, the Chinese diplomat lashed out at “Western egotism and white supremacy,” arguing that Canadians who criticized China’s treatment of the Canadians were guilty of racism and double standards.

“To those people, China’s self-defense is an offense to Canada,” Lu wrote.

The conflict with China has put Trudeau’s government caught between the United States and China, with no easy way out.

Chinese officials have cast Meng’s arrest as a political matter and have called for her immediate release.

Trudeau and other Canadian officials have repeatedly stressed that Canada sees her arrest as in accordance with an extradition agreement between Canada and the United States and must play out according to Canadian law.

Unless U.S. officials decide not to proceed with their case against Meng, she could remain in Canadian custody for months or years to come, keeping the dispute alive in the eyes of the Chinese government.

Canada must now decide if and how to work with the U.S. on the matter without undermining the independence of Canadian courts-a delicate strategy fraught with political risk.

“I can’t quite see the outcome on this,” said Jeremy Paltiel, a professor specializing in China at Ottawa’s Carleton University, “There is no upside for Canada, there are only different varieties of downside.”