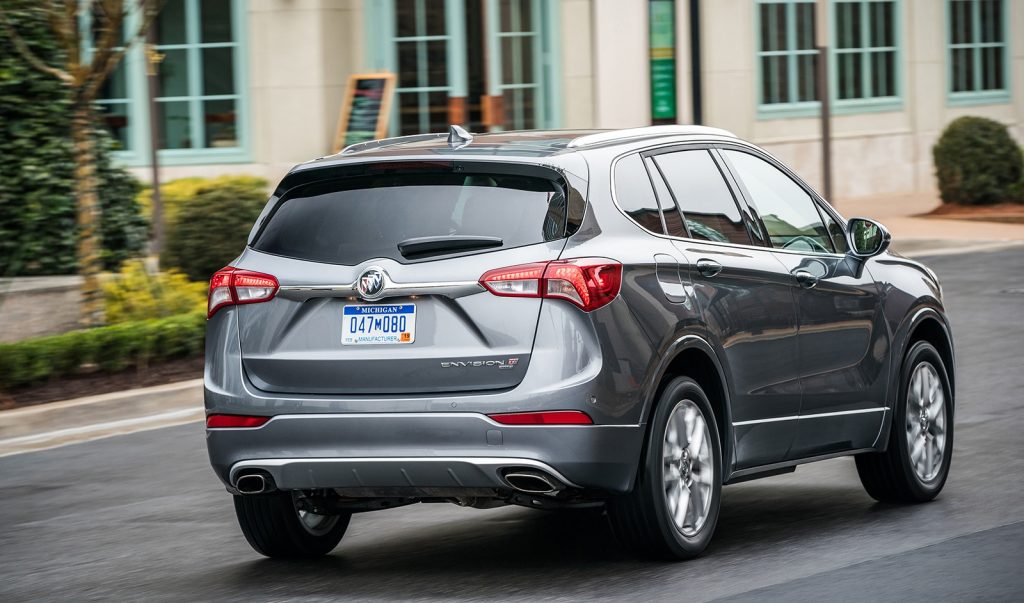 Buick added the Envision crossover utility vehicle to its U.S. lineup two years ago, a premium compact with room for up to five passengers.

Built in China, the Envision falls between the larger Enclave, assembled in Michigan, and the smaller Encore, built in South Korea.

The base model is not available with all-wheel drive, but it can be added to the Preferred and Essence models for $1,850.

Base, Preferred and Essence models come with a normally aspirated 2.5-liter inline four-cylinder engine with 197 horsepower and 192 foot-pounds of torque, connected to a six-speed automatic transmission.

But the Premium trim levels get a turbocharged 2.0-liter inline four-cylinder engine producing 252 horsepower and 295 foot-pounds of torque. It’s paired with a nine-speed automatic transmission, which is new for 2019.

The turbo engine got a bump in torque from last year’s 260 foot-pounds, even though horsepower remained the same. We found it to provide plenty of power in most driving situations, including uphill freeway on ramps.

Other changes for 2019 from the 2018 Envision include new sculpted front and rear fascias and a new grille design; high-intensity-discharge headlights standard on 2.5-liter models; bi-functional LED headlights now standard on the 2.0-liter turbo models; LED wing signature lights and taillights standard on every model; new 18- and 19-inch wheel designs; a new engine stop/start deactivation switch; and the ability for the driver to switch between adaptive and standard cruise control.

Adaptive Cruise Control, which uses radar to pace the vehicle to the one it is following, was included on our tester as part of the Driver Confidence Package ($1,545), which also added Forward Automatic Braking, and the Surround Vision camera system (replacing the singe Rear Vision Camera). This system gives both a rear view and a separate bird’s eye view of what’s around the vehicle, in a split screen on the audio/navigation touch screen.

There is a new exterior color, Satin Steel Gray Metallic, and a new interior combination, Dark Galvanized leather seats with the Ebony interior. But our tester came in a pleasing Ebony Twilight Metallic color ($395 extra) with the Ebony leather interior.

Envision is the first Chinese-built highway vehicle to be sold in the United States. General Motors has been selling it in China since 2014, where the Buick brand is quite popular. That dates back to the time when Chinese royalty drove Buicks early in the 20th century. GM has suggested that there could be a U.S. production site for the Envision at some point.

Other features include LED daytime running lights and rear LED accent lights, active grille shutters, and a body structure that includes some high-strength steel and an aluminum hood.

Also included in the base price are 19-inch aluminum wheels, keyless passive entry and pushbutton start (with remote start feature), and a Bose premium seven-speaker audio system. Available is a panoramic moon roof ($1,495), which was included on our test vehicle.

The Premium II has everything the Premium offers, along with heated and cooled front seats, a head-up display, IntelliLink infotainment system with navigation, Automatic Parking Assist and articulating HID headlights that turn slightly in the direction the car is turning.

The Envision is roomier for passengers and cargo than some of its key competitors, such as the Acura RDX. The front bucket seats were comfortable enough for a long weekend outing, and our rear-seat passengers had plenty of knee and leg room even with the front seats situated well back on their tracks.

Handling was surprisingly pleasing, and steering was precise and predictable. The nine-speed transmission shifted smoothly, with no detectable gear-hunting and unnecessary shifting when we were driving up and down some hilly roads.

Envision was designed to be lighter and have less wind resistance than typically seen in this class. Buick says that even the moon roof was designed to produce minimal wind noise when open.

The exterior design is similar to that of other Buick crossovers, so it’s easily recognizable as a member of the Buick CUV family. It has Buick’s signature winged headlights and heated outside mirrors with built-in LED turn signals.

There is a “floating” wraparound instrument panel, a large center console storage bin, an eight-inch Buick IntelliLink audio/connectivity screen, and a steering wheel with thumb-operated toggle switches for the IntelliLink menus and driver-information center. OnStar with 4G LTE and a built-in Wi-Fi hotspot are included on Premium trim levels.

We had two USB ports up front, but they were inconveniently located inside the center console box, rather than up at the front under the dash where most vehicles now provide them.

The included Stop/Start technology automatically shuts off the engine when the vehicle is stopped in traffic, then instantly restarts it when the brake pedal is released. This is intended to save fuel by eliminating engine idling when stopped, say at a traffic signal.

Envision’s HiPer Strut front suspension is designed to reduce the annoying torque steer that often occurs when power is applied to the front wheels of a vehicle.

The twin-clutch all-wheel-drive system helps improve handling in all driving conditions and is fully automatic, requiring no driver input. It’s not intended for serious off-road driving, however, as it has no low-range feature. The default is front-wheel drive; torque is sent to the rear wheels when slipping is detected.

Also included on Premium trims is Automatic Park Assist, which can identify a suitable parallel or perpendicular parking spot and steer the vehicle into it when prompted by the driver.

Cargo space totals 26.9 cubic feet with the rear seatbacks in place; with them folded, it expands to 57.3 cubic feet. The seatback has a 70-30 split, and can be folded down from the rear using a handle on each side of the rear compartment. It looks like a chrome door handle, and both have to be activated to drop both sides of the seatback.

The only other option on our tester was the Interior Protection Package ($205), which included all-weather floor and cargo mats.

EPA fuel-economy ratings for our Premium II tester were 20 mpg city/25 highway/22 combined. With about a 50-50 mix of city and highway driving, we averaged about 21.6 mpg.

Total sticker price for our Envision Premium II model was $48,235, including freight and $3,640 in options.

Highlights: The Envision, assembled in China, is Buick’s compact crossover, featuring lots of standard and available comfort, convenience and safety features. It has a smooth ride, good handling, and plenty of power, especially from the uplevel turbo engine. All-wheel drive is standard on Premium models.