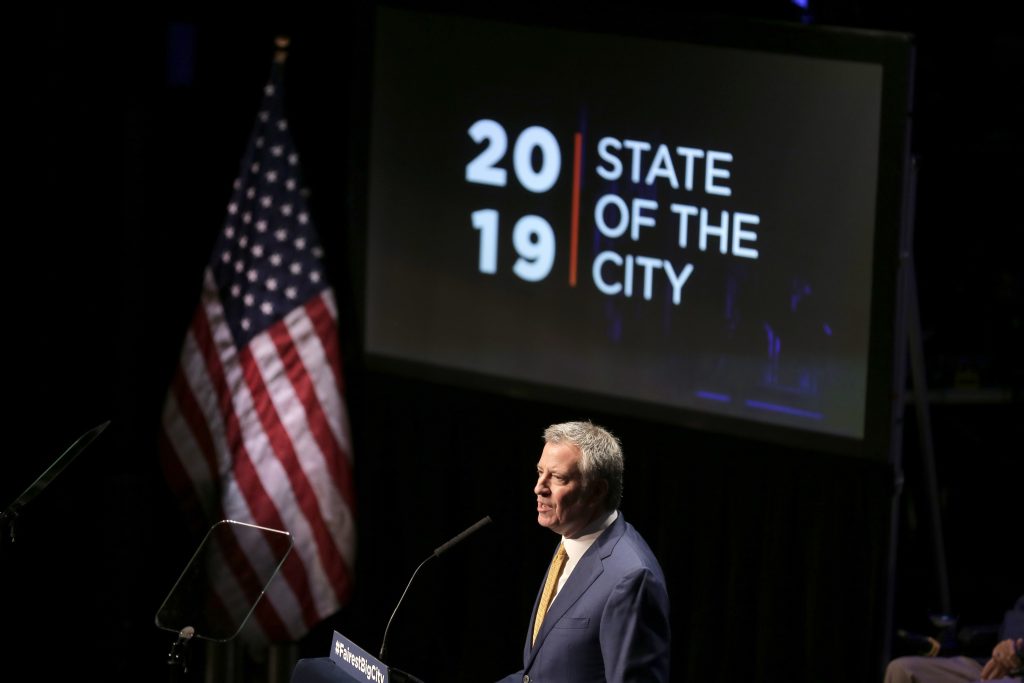 “Imagine a city where New Yorkers can live their lives more fully,” de Blasio told a cheering audience at Symphony Space in Manhattan. “That’s the quality of life I want for every New Yorker.”

The Democratic mayor said he would create a city-managed retirement fund for workers who lack access to employer-sponsored funds as well as a new Office to Protect Tenants.

The annual address was introduced by a short video depicting residents going about their day throughout the city.

The video highlighted an avos ubanim program, in which Sender Rapaport was seen learning Maseches Makkos with his son Nochum, who attends Bobover Yeshivah.

“You family is everything for you,” said the elder Rapaport, who run the Masbia soup kitchen in Boro Park and Flatbush. “What for others might be rough and tumble, for chassidic families, New York is the best place to live.”

The second-term mayor said millions of Americans are “boxed into lives that just aren’t working” because of Republican policies like tax breaks for the wealthy and corporations.

The plan to create a city-managed retirement fund has been proposed previously and would have to be passed by the City Council.

De Blasio said half of the city’s workers don’t have employer-sponsored retirement plans. Under his proposal, he said, those employees will be able to invest a portion of their paycheck into a city-managed fund and carry it from job to job. “If you’ve spent your lifetime working, you’ve paid your dues,” he said.

De Blasio signed an executive order creating the Office to Protect Tenants on the spot and vowed to unilaterally take away buildings from landlords who don’t respond to tenant complaints. “If fines and penalties don’t cut it, we will seize their buildings and we will put them into the hands of a nonprofit that will treat tenants with the respect they deserve,” he said.

The initiative to provide free glasses is an expansion of an existing partnership with eyewear maker Warby Parker that provides free eye exams and glasses in more than 200 schools.

De Blasio said the renamed Department of Consumer and Worker Protection will be charged with protecting the rights of nannies, home health aides, freelancers and others who work without benefits or traditional job protections.

De Blasio, who campaigned in 2013 on a promise to offer prekindergarten to every 4-year-old in the city, has sought to position himself as a national progressive leader. But some of his fellow liberal Democrats in New York have criticized him for his enthusiastic embrace of Amazon, which is getting $2.8 billion in tax breaks and grants from the state and city to build a secondary headquarters in New York.

The mayor said Thursday that decisions by Amazon and Google to expand their presence in the city prove that “the world’s most innovative companies want to be here and want to hire New Yorkers.”