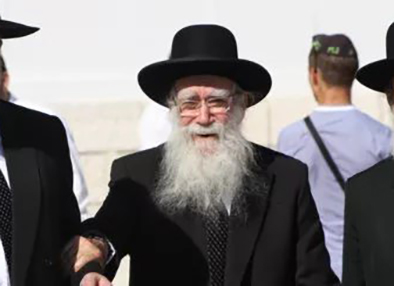 Harav Yitzchak Yechiel Yaakobowitz, long-standing Rav of Herzliya, was niftar on Wednesday morning, at the age of 89.

The Rav, who served as Rav for over six decades, was niftar suddenly in his home. He attended the wedding of a granddaughter earlier this week in Yerushalayim.

Rav Yaakobowitz was born in 5690/1930 in Germany, to his parents Rav Chaim Yosef, who served as a Rav in Germany before the Holocaust, and Mrs. Dinah.

When he reached of age, he married Rebbetzin Shprintza Movshowitz, the daughter of Harav Binyamin Movshowitz, zt”l, Rav of Herzliya.

After the passing of his father-in-law in 5713/1953, Rav Yitzchak Yechiel was appointed Rav of Herzliya by the Chazon Ish and Harav Yosef Shlomo Kahenman, the Ponevezer Rav, zt”l.

He also served as a maggid shiur in Yeshivat Hasharon, under Harav Yaakov Edelstein, zt”l, Rav of Ramat HaSharon.

Rav Yitzchak Yechiel was one of the longest serving Rabbanim in Eretz Yisrael, holding the post for over 65 years.

The levayah of Rav Yaakobowitz began from the main shul in Herzliya and continued to Yerushalayim, where he was buried on Har Hamenuchos.