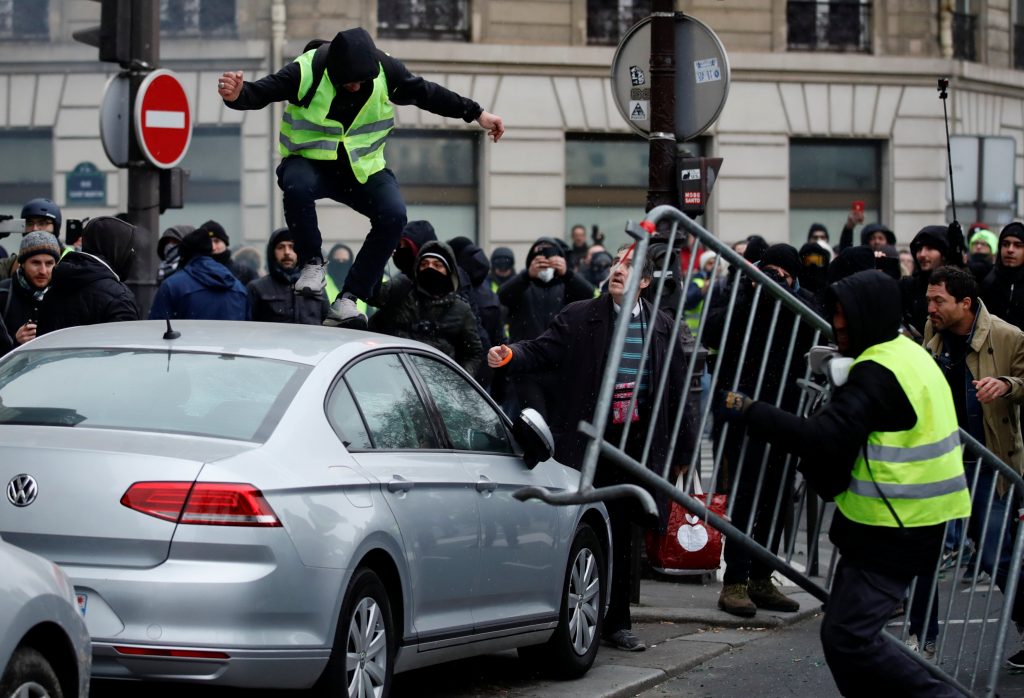 French President Emmanuel Macron intended to start the new year on the offensive against the “yellow vest” protesters. Instead, he is reeling from more violent street demonstrations.

What began as a grassroots rebellion against diesel taxes and the high cost of living has morphed into something more perilous for Macron – an assault on his presidency and French institutions.

The anti-government protesters on Saturday used a forklift truck to force their way into a government ministry compound, torched cars near the Champs Elysees and in one violent skirmish on a bridge over the Seine punched and kicked riot police officers to the ground.

The French authorities’ struggle to maintain order during the weekend protests raises questions not just over policing tactics but also over how Macron responds, as he prepares to enact stricter rules for unemployment benefits and cut thousands of public-sector jobs.

On Sunday evening, Macron wrote on Twitter: “Once again, the Republic was attacked with extreme violence – its guardians, its representatives, its symbols.”

His administration had hardened its stance against the yellow vests after the protest movement appeared to have lost momentum over recent days.

The government would not relent in its pursuit of reforms to reshape the economy, government spokesman Benjamin Griveaux said on Friday, branding the remaining protesters agitators seeking to overthrow the government.

Twenty-four hours later, he was fleeing his office out of a back door as protesters invaded the courtyard and smashed up several cars. “It wasn’t me who was attacked,” he later said. “It was the Republic.”

Driving the unrest is anger, particularly among low-paid workers, over a squeeze on household incomes and a belief that Macron is indifferent to citizens’ needs as he enacts reforms seen as pro-business and favoring the wealthy.

Macron’s government has been shaken by the unrest, caught off-guard when in November the yellow vests began blocking roads, occupying highway tollbooths and staging violent invasions of Paris and other cities on weekends.

Two months on, it has not found a way to soothe the yellow vests’ anger and meet their demands, which include a higher minimum wage, a more participative democracy and Macron’s resignation.