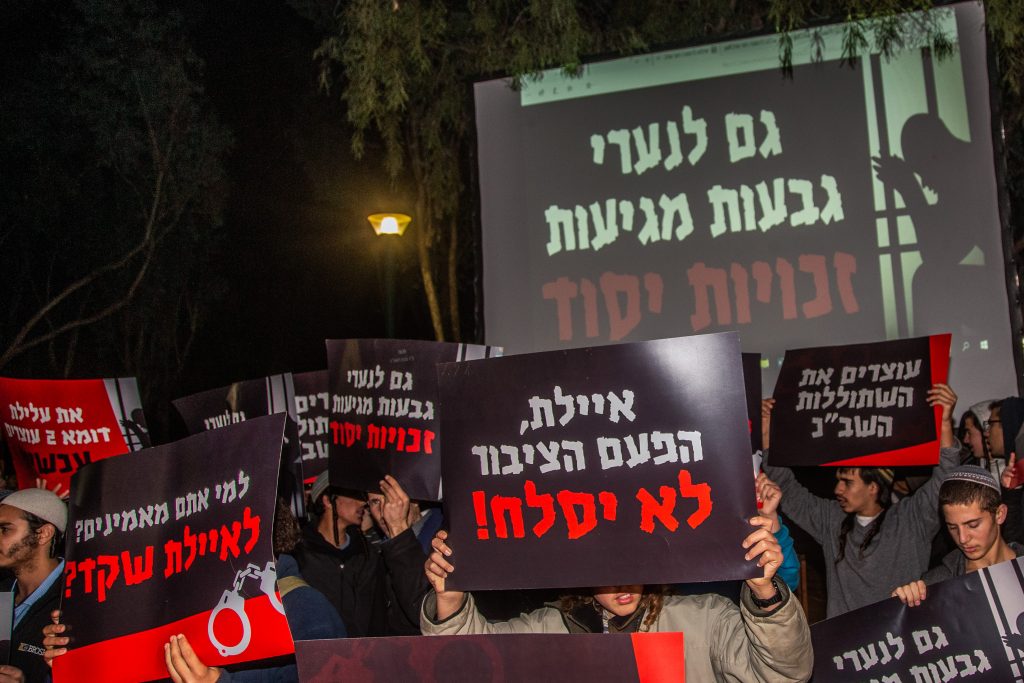 Several hundred people demonstrated on Tuesday outside the home of Minister Ayelet Shaked in Tel Aviv to protest the detention conditions of three minors accused of involvement in terror activities.

Held in the custody of the Shin Bet, the three suspects from Yehudah and Shomron, have been denied the right of visits from family or legal counsel since their arrest on Sunday.

A confession extracted from one of the youths was thrown out by the judge presiding in the case earlier in the day.

A large detachment of police prevented the protesters from approaching Shaked’s house.

The mother of one of the detainees appealed to the minister: “I am a mother and you are a mother. I ask you, Minister Shaked, you are dealing with a matter of life and death. I am begging that my son be allowed to meet with an attorney, that our children have the full right to meet an attorney, that’s what I’m asking you to do. That’s what my heart wants, that it should also enter your heart. That’s all I’m asking,” Arutz Sheva reported.

“Even terrorists get attorneys. Even [Nazi war criminal] Demjanjuk had an attorney. How is it that our children – good children who are fighting for our land – cannot get one? I beg you to intervene so they can have an attorney,” the mother pleaded.

Micahl Phua, a social activist, said at the rally: “Minister Shaked, you can start something new – starting this evening. Once in Duma they lied to you and said that there is no torture. Do not let them lie to you again. Stop the injustice. They are doing everything they can to get a confession. The Jewish department in the Shin Bet must be dismantled. Take your hand off of the boys. We will not sleep until the boys are released. They cannot be harmed.”

In response, Shaked said later she had discussed the matter with the State Attorney and made it clear that she expected the legal rights of suspects to be respected, including allowing the detained youths to meet with their attorney.

“The minister is naturally not aware of the investigations and cannot intervene in them,” Shaked said in a statement.