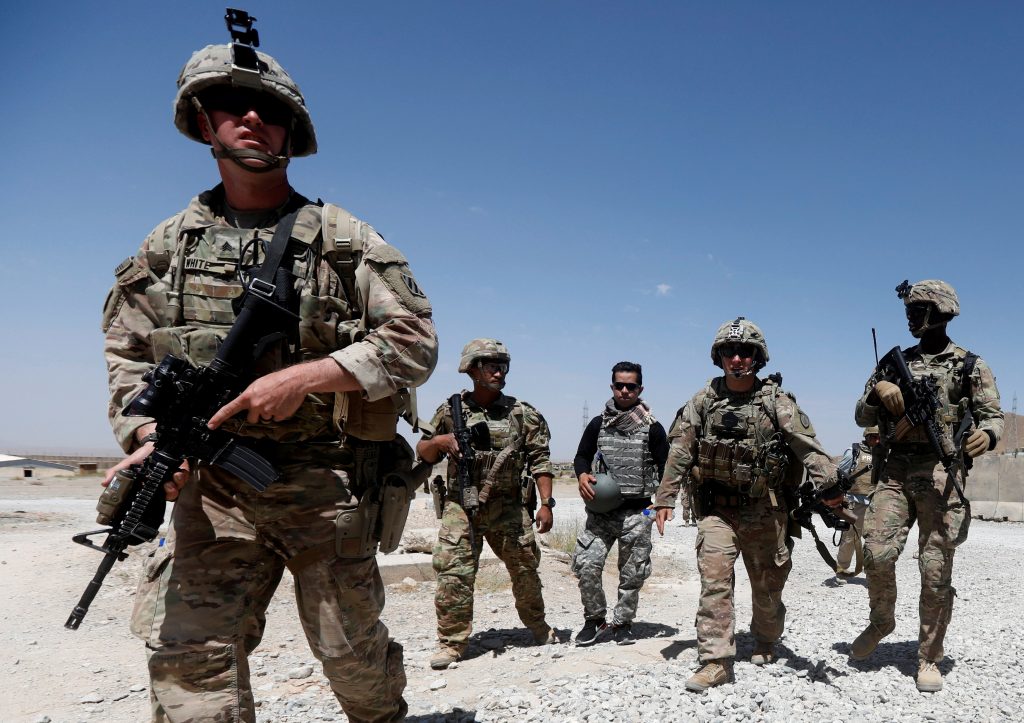 President Donald Trump is considering significantly drawing down troops from Afghanistan, two U.S. officials told Reuters on Thursday, in the latest sign his patience is thinning both with America’s longest war and overseas military interventions, generally.

Shortly after the officials spoke, Defense Secretary Jim Mattis said he was quitting so that Trump could have a Pentagon chief more aligned with the president’s views.

Mattis has argued for maintaining a strong U.S. military presence in Afghanistan to bolster diplomatic peace efforts. He also opposed the U.S. troop withdrawal from Syria that Trump announced on Wednesday, a move that has bewildered allies and triggered harsh reaction from Republican allies in Congress.

Garrett Marquis, a spokesman for the National Security Council, said the White House would not comment “on future strategic developments.”

The U.S. officials, who spoke on condition of anonymity, said thousands of the 14,000 troops could be sent home as a result of the deliberations, the disclosure of which could undermine peace efforts with the Taliban.

Trump privately has been grousing about U.S. military involvement in Afghanistan, telling an ally as recently as Wednesday words to the effect of, “What are we doing there. We’ve been there all these years.”

The source, who asked to remain unidentified, said it appeared the president “has lost all patience” with the U.S. military presence in Afghanistan.

More than 2,400 U.S. forces have died in the 17-year-old war in Afghanistan, and Pentagon officials have repeatedly warned that a precipitous exit would allow terrorists to develop new plots on America like the Sept. 11, 2001 attacks that plunged the United States into an era of open-ended warfare.

Republican Senator Lindsey Graham, often a vocal Trump ally, warned of possible danger to the United States if the drawdown goes through.

“The conditions in Afghanistan – at the present moment – make American troop withdrawals a high risk strategy. If we continue on our present course we are setting in motion the loss of all our gains and paving the way toward a second 9/11,” Graham said in a statement.

Trump last year approved an increase in U.S. troops but acknowledged that he did so reluctantly. U.S. officials have told Reuters that Trump has been keen to bring the Afghan conflict to a close.

The Taliban insurgency has strengthened its grip over the past three years, with the government in Kabul controlling just 56 percent of Afghanistan, down from 72 percent in 2015, a U.S. government report showed.

Late last month, at least 22 Afghan police were killed in a Taliban ambush in Afghanistan’s western province of Farah, adding to the growing casualty toll on Afghan security forces.

Earlier this week, U.S. special envoy Zalmay Khalilzad and Taliban representatives held talks in Abu Dhabi on a deal that would end the war. Officials from Saudi Arabia and the United Arab Emirates also took part.

The Saudi ambassador to Washington, Khalid bin Salman, tweeted on Thursday that the discussions had been productive and would bring “very positive results by the beginning of next year.”

But a former senior State Department official familiar with the issue said that the Taliban representatives rejected a proposal by Khalilzad for a ceasefire and demanded that the talks focus on a U.S. withdrawal. The news that a drawdown was under consideration could be intended as a gesture to the insurgents, the official said.