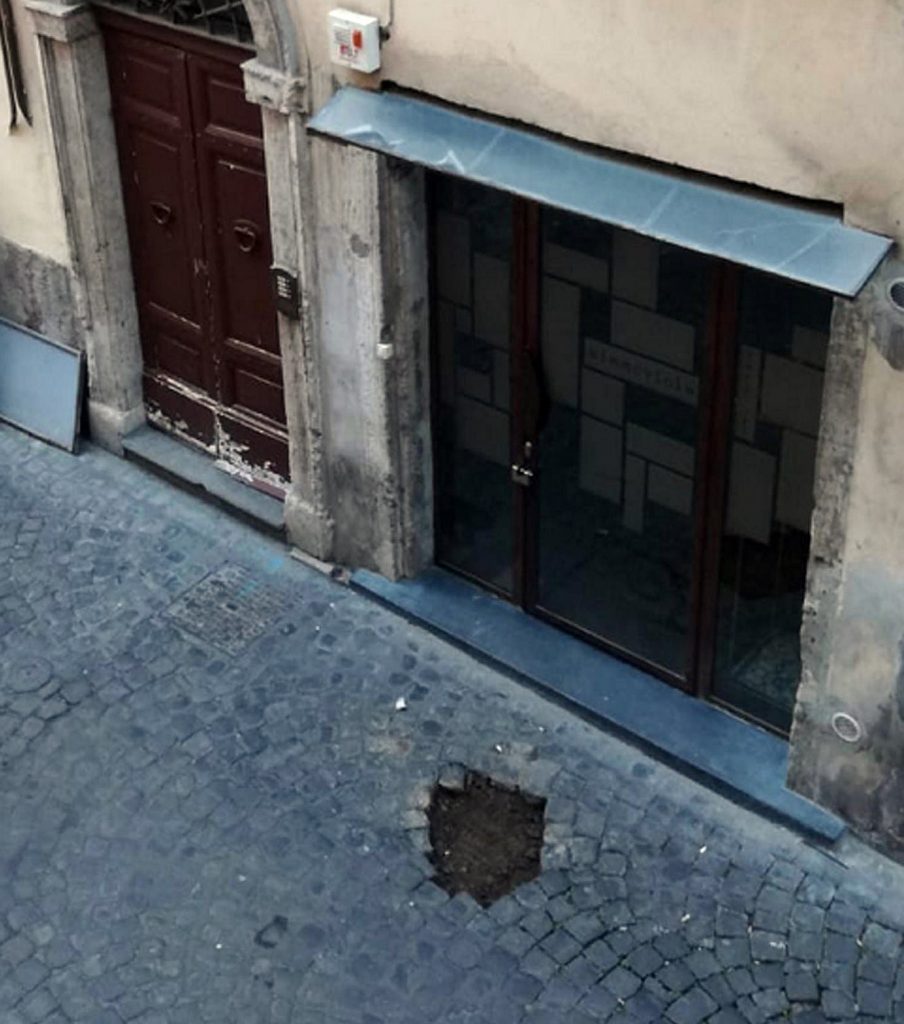 The twenty small bronze plaques were embedded in the cobblestones of the walkway in the Monti neighborhood of Rome, adjoining the historic central district that houses the Jewish ghetto. The cobblestone streets were dotted with over two hundred plaques installed in front of the homes of Jews who were killed or deported during the war. Gunter Demnig, the German artist, has placed an estimated 70,000 of them around Europe to remember all who were deported.

Then, overnight, the twenty commemorative plaques in front of the Di Consiglio family home were gone. All that was left was a gaping hole, symbolic of the void of the family that no longer exists.

Rome mayor Virginia Raggi was joined by politicians of every stripe, who in turn united on Monday with Italy’s Jewish community in denouncing the theft of the small bronze plaques honoring this Jewish family. “Memory requires respect,” the mayor tweeted as she condemned the theft of the plaques.

Art in Memory, the organization responsible for laying the plaques, reported the theft. Yet this isn’t the first time the group has faced anti-Semitic acts. This past July the group reported receiving a threatening letter featuring a photo of Adolf Hitler.

“The association denounces this vile act of anti-Semitism and invites all Romans to keep the memory alive in order to prevent these criminal acts from continuing [and] being tolerated and legitimized,” the group’s president, Adachiara Zevi, told The Associated Press.

Sant’Egidio, a Rome-based Catholic charity, vowed to continue honoring Jews who perished, declaring, “That memory is all the more precious to defend against the worrisome growth of new racism and discrimination.”

Anti-Semitic acts have risen in Italy, a result of the growth of far-right and neo-fascist groups, as well as the nationalist rhetoric espoused by Italy’s anti-migrant interior minister, Matteo Salvini.

Salvini is scheduled to visit Israel this week, and a group of Italian Jews urged him to use the occasion to denounce growing anti-Semitism in Italy and Europe. The minister bristled when asked to do so at a Monday press conference, saying it was “obvious” that he condemned anti-Semitism but adding that he didn’t need to justify himself every time he goes to Israel.

One of the surviving Di Consiglio family members was an instrumental witness in the case against Nazi war criminal Erich Priebke, a former SS captain who died in Rome in 2013 while serving a life sentence for his role in the massacre of 335 Italians in 1944.