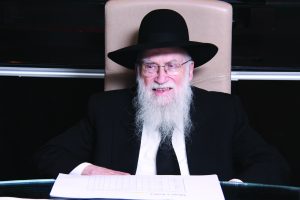 Harav Avrohom Chaim Levin, zt”l, Rosh Yeshivah, Yeshivas Telshe Chicago, one of America’s leading marbitzei Torah who was a Rebbi to generations of talmidim, a dedicated leader, and a Gadol baTorah who embodied the lofty ideals of mussar and gadlus haadam was niftar on Wednesday, 20 Kislev. He was 86 years old.

A model of the mesorah of Telshe whose actions bespoke refinement in all his ways, with a deep ahavas haTorah and unyielding sense of responsibility to the klal, Rav Levin grew to be a revered manhig. As a Rosh Yeshivah, he implanted in the hearts and minds of American bachurim a desire and self-confidence that they too could reach great heights in Torah and avodah.

In his roles as a member of the Moetzes Gedolei haTorah of Agudath Israel of America, Yoshev Rosh of the Vaad Roshei Hayeshivos of Torah Umesorah, the de facto Torah manhig of Orthodox Jewry in Chicago, and as an address for advice for individuals of all walks of life, his clarity of thought and absolute loyalty to what he saw as truth would play a role in countless of the weightiest decisions.

On Wednesday afternoon, hundreds gathered to bid a tearful farewell to a unique Gadol whose passing leaves a gap in so many realms. 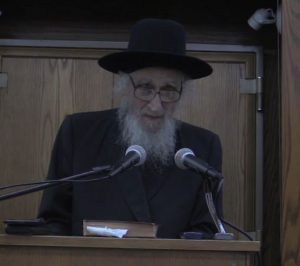 “Sar v’gadol nafal b’Yisrael [a great prince has fallen in Klal Yisrael], not everyone with the title ‘sar’ can be called a Gadol, Rav Avrohom Chaim, zt”l, was a sar v’gadol,” said Harav Chaim Dov Keller, Rosh Yeshivah, Yeshivas Telshe Chicago, who has led the yeshivah together with Rav Levin since shortly after its founding. “Rav Avrohom Chaim’s purpose was to carry on the mesorah he had seen by his Rebbi, Harav Elya Meir [Bloch], zt”l, that mesorah is not only a derech halimud and mussar, it’s [to do all one can] for the sake of kvod Shamayim.”

Rav Avrohom Chaim Levin was born into a home rich with Torah and the principles of the great baalei mussar. His father, Harav Eliezer Levin, zt”l, was a phenomenal talmid chacham who had spent many years studying in the Radin Yeshivah and where he was privileged to observe and learn from the Chofetz Chaim, and went on to become one of the prized talmidim of Kelm’s famed Talmud Torah. Rav Eliezer served for several years as Rav in the Lithuanian town of Vashki, where his only son (the Levins also had several daughters) was born.

In the mid-1930s, Rav Levin, his wife, Rebbetzin Sarah Menucha, a”h, and their young family immigrated to the United States and settled in Detroit where Rav Eliezer would go on to become one of the city’s most prominent Rabbanim.

With few options for chinuch in Detroit of the early 1940s, the Levins made the difficult, but fateful decision to send their young Avrohom Chaim to the Telshe Yeshivah, which had only recently been founded in Cleveland.

In Telshe, he quickly grew to be one of the beis medrash’s elite talmidim spending hours poring over his Gemara with great hasmadah and mastering the shiurim of his Rebbeim. He would absorb not only the yeshivah’s approach to Torah study rooted in an emphasis of arriving at the simple truth of each sugya; he came to embody its standards of gadlus haadam — a model of man controlled by an intellect refined by Torah, and a commitment to dedicate one’s life to the needs of the tzibbur. His entire life, the teachings of his primary Rebbi, Harav Eliyahu Meir Bloch, would remain deeply planted within him; he would often quote his Rebbi’s words and measure his actions against the standard his Rebbi had set.

In 1960, while still in his 20s, Rav Avrohom Chaim was sent by Harav Mordechai (Mottel) Katz, zt”l, together with Harav Chaim Schmeltzer, zt”l, and a small group of talmidim from Cleveland to found a branch of Telshe in Chicago.

From its humble beginnings, and through the relentless efforts of its founding Roshei Yeshivah and, ybl”c, Rav Keller, who would join the hanhalah shortly afterward, the yeshivah grew into the city’s flagship makom Torah, producing not only generations of talmidim, but raising the banner of Torah for the Chicago community.

True to his standard for all aspects of life, Rav Levin’s shiurim were rooted in an unyielding search for the truth. Avoiding complicated and seemingly mind dazzling “pshetlach,” he demanded of himself and, by extension, to his talmidim that all efforts be made to ensure that the most essential matters in the Gemara could be explained in the simplest way possible that stood the test of calculations from all sides.

His own hasmadah set a shining example for bachurim. From his days as a young Rosh Yeshivah until his being recognized a one of the Gedolei hador, Rav Levin maintained an uncanny ability to uphold his daily learning schedule. This extended not only to the time he allotted for Torah, but with his constant striving for greater levels of self-disciple he was able to seemingly erase the many pressing and weighty matters that rested on his shoulders and focus intensely and solely on learning.

In his shmuessen, the Rosh Yeshivah set high goals for talmidim, speaking about the sense of malchus with which a Jew should live and that all of ones actions must not be for himself but for the betterment of Klal Yisrael, measured by the gauge of how much kvod Shamayim one can bring to the world.

Even in his early years, Rav Levin was guided by a deep sense of responsibility to the klal in every way. Not satisfied with the challenge of building up his yeshivah and teaching a growing number of talmidim, he put great efforts into establishing an Agudah division in Chicago, working closely with the organization both locally and nationally on a wide array of issues facing the tzibbur over the decades. Later, as a member of the Moetzes, he dedicated countless hours of his time studying the matters of the day and guiding askanim. Increasingly, he was called upon by other yeshivos for guidance and eventually became one of the main rabbinic leaders of Torah Umesorah. In Chicago as well, his advice was sought after by a wide array of the city’s Rabbanim and his word was usually the last on matters facing the kehillah.

Harav Shmuel Yehudah Levin, a son, said in his hesped that his great father epitomized the statement of Chazal that “there is no one who is more precious to Hakadosh Baruch Hu than a shaliach [messenger] who is moser nefesh for his mission,” and that he did.

“How many times did we hear from you that there is nothing in life besides doing your shelichus?” he asked passionately in his hesped. “We had a Rebbi who picked us up, [us] small people, he gave us big hasagos [and showed we could achieve] greatness.”

An additional levayah was scheduled to take place in Lakewood on Thursday morning at Beth Medrash Gevoha and, from there, for the aron to continue to Eretz Yisrael for kevurah in Bnei Brak.