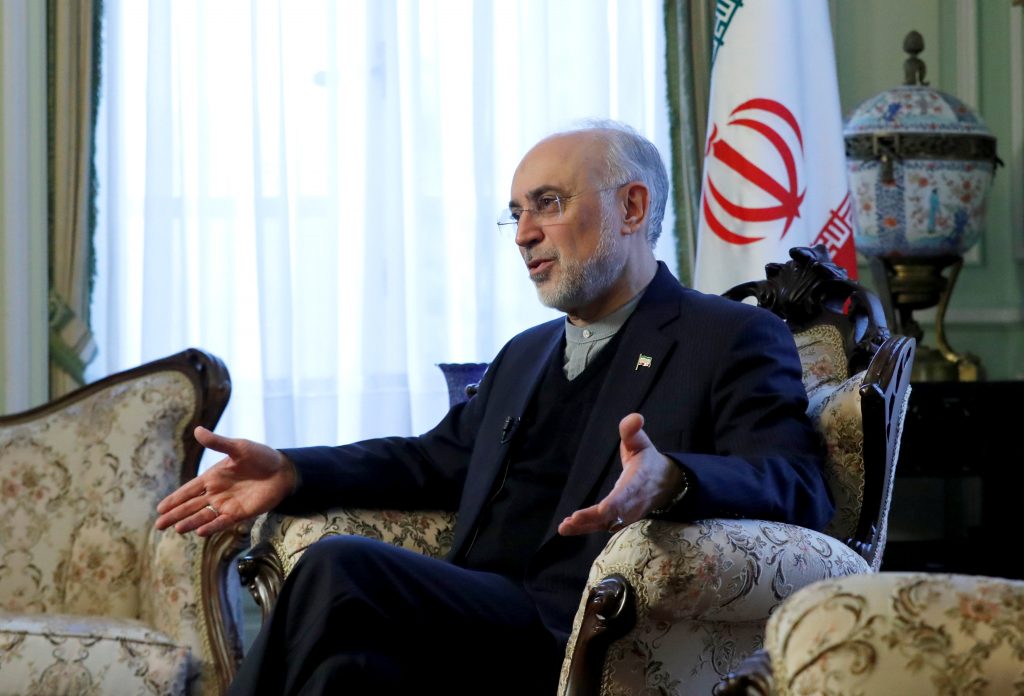 Iran’s nuclear chief said on Tuesday he was warning the European Union’s top diplomat that Tehran’s patience was running out on the bloc’s pledges to keep up oil trade despite U.S. sanctions.

Ali Akbar Salehi, head of Iran’s Atomic Energy Organization, said the Islamic Republic could resume its 20-percent uranium enrichment if it fails to see the economic benefit of the 2015 deal that placed curbs on its nuclear program.

“If we cannot sell our oil and we don’t enjoy financial transactions, then I don’t think keeping the deal will benefit us anymore,” Salehi told Reuters ahead of a meeting with EU foreign policy chief Federica Mogherini in Brussels.

“I will pass certainly a word of caution to her [Mogherini]: I think the period of patience for our people is getting more limited and limited,” he said. “We are running out of the assumed timeline, which was in terms of months.”

The meeting was due on Tuesday afternoon, with no media statements expected afterwards.

Under the 2015 deal, Iran restricted its disputed nuclear program, widely seen in the West as a disguised effort to develop the means to make atomic bombs, in exchange for an end to international sanctions.

President Donald Trump pulled out of the accord in May, arguing that it did not rein in Iran’s ballistic missile program or support for armed proxies, and reimposed sanctions on Iranian oil exports this month.

But Europe sees the nuclear deal as an important element of international security.

The EU and other remaining parties – China and Russia – have struggled to preserve trade incentives for Iran to respect the deal’s nuclear curbs under U.S. pressure.

In Brussels for talks on civilian nuclear cooperation that EU officials intended as a signal of support for the accord, Salehi said the bloc’s efforts were encouraging but added: “We have not yet seen any tangible results.”

He welcomed an EU plan to establish a special financial vehicle (SPV) for non-dollar trade with Iran but only if it could preserve Iranian oil exports – its economic lifeline.

“It [the SPV] could be helpful in keeping the deal alive,” he said. “If there is nothing to reap then what is the purpose of us staying in because voices in Iran are day by day becoming more against the deal.”

Iran’s oil exports are expected to drop sharply to about 1 million bpd in November from a peak of 2.8 million bpd earlier this year. However, output is expected to recover somewhat from December, thanks to U.S. waivers, including for two EU nations: Greece and Italy.

Under the 2015 agreement with six world powers, Iran stopped producing 20-percent enriched uranium and gave up the majority of its stockpile. Salehi reiterated warnings that Iran has the technical capacity to ramp up enrichment if the deal unravels.

“It is very easy for us to go back to what we were before – even to a better position,” he said. “We can start the 20-percent enrichment activity. We can increase the amount of the enriched uranium.”

Uranium refined to 20-percent fissile purity is well beyond the 5 percent normally required to fuel civilian nuclear power plants, although still well short of highly enriched, or 80 to 90 percent, purity needed for a nuclear bomb.