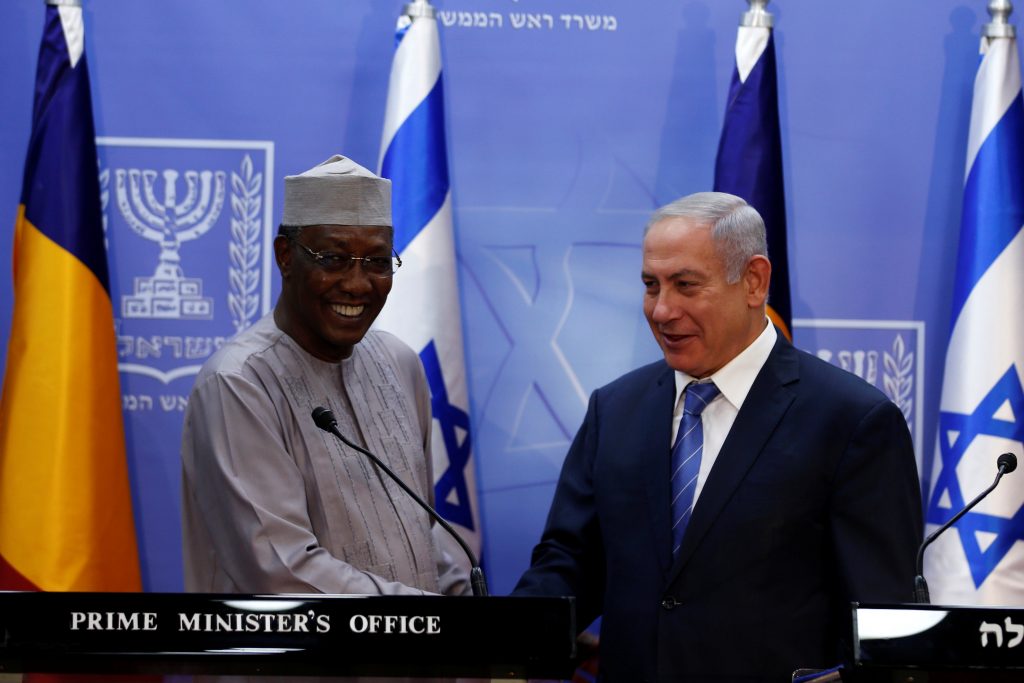 The Chadian President Idriss Déby has declared his intention to restore diplomatic relations with Israel after a break of 46 years, during the first hours of his historic visit to Yerushalayim on Sunday.

Prime Minister Netanyahu and the leader of the Muslim-majority African country met for a one-on-one meeting at the Prime Minister’s Office on Sunday afternoon, and then held a joint press conference.

“The relations between our countries were cut in 1972 for specific historic reasons, but our special relations continued all the time,” said Déby. “The current visit to your beautiful country expresses our desire to take the relations that existed all the time and make them stronger.”

However, the African leader did not fail to note significant differences.

“The resumption of diplomatic relations with your country, which I desire, does not make us ignore the Palestinian issue,” he continued. “My country is profoundly attached to the peace process and has shaped the Arab peace initiative, the Madrid principles and existing agreements.”

Déby also affirmed that Chad and Israel face “a common battle” against terrorism.

“Mankind must simply get rid of this thing,” he said.

PM Netanyahu, meanwhile, hinted that he plans another trip to additional Arab countries in the near future.

“In the last two years, I was in Africa three times — East and West Africa,” he said. “I will drop a big hint: I hope to get to Central Africa. Israel is coming back to Africa. Africa is coming back to Israel.”

When Déby was asked by a reporter about bilateral arms deals, Netanyahu interjected on his behalf: “We discussed what we discussed.”

While Netanyahu dodged the issue, a Chadian government source was quoted by the Reuters news agency on Sunday as saying the visit is “focused on security.” Israel has sent weapons and funds to Chad this year to help the country’s fight against rebels in the north, the source said.

Meretz chair MK Tamar Zandberg seized on the issue, insisting that PM Netanyahu disclose whether the current visit will also be about arms deals.

“The concern is that the visit will also be used for secret arms deals in which Israeli arms will be sold to persecute political opponents, human rights activists, and journalists,” Zandberg says in a statement.

She also attacked Déby personally. “The leader of Chad is a despicable person who is responsible for the persecution of…arresting journalists, arresting dissidents in opposition, and establishing a dictatorial regime in his country,” Zandberg charged.

“When there is a choice between the liberal democracies and the world’s most dubious leaders, Netanyahu always chooses the dubious. Netanyahu’s foreign policy continues to tarnish Israel’s reputation around the world,” she adds.

During the press conference, Netanyahu thanked the Chadian leader for his visit and hailed “flourishing” ties between Israel and African nations.