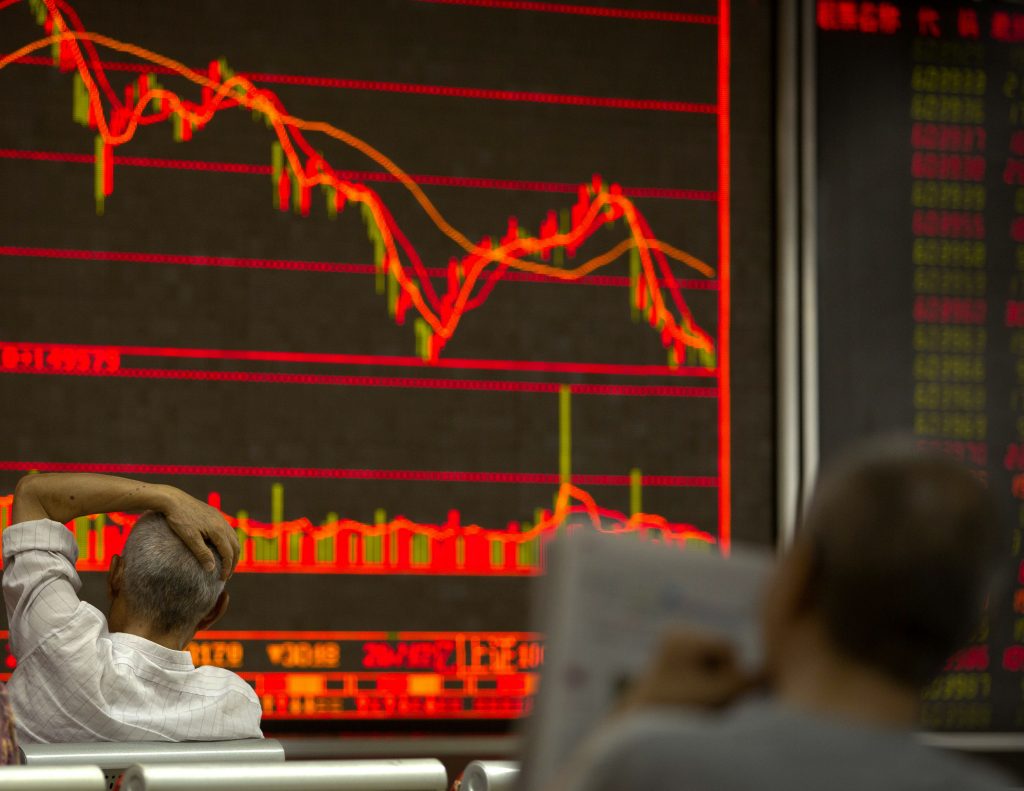 Asian shares seesawed in cautious trading on Thursday with China extending losses as investors worried about slowing global growth in the face of rising U.S. interest rates and trade tensions.

U.S. stock futures were slightly higher after briefly turning down, underscoring fragile investor sentiment following a rout in October and steep sell-offs in recent sessions. Spreadbetters pointed to a tentative start for Europe.

MSCI’s broadest index of Asia-Pacific shares outside Japan were last up 0.2 percent, recouping earlier losses. The index has managed to hold up so far in November after three straight monthly declines, but is on track for its worst annual performance since 2011.

Japan’s Nikkei was off morning highs but up 0.7 percent. Chinese shares were in the red after opening higher, with the blue-chip index falling 0.4 percent.

“This was a halfhearted rally to start with,” said Shane Oliver, Sydney-based head of investment strategy at AMP.

“Investors are still wary about whether they’ll see further lows given none of the issues that drove the recent correction have dissipated.”

The bitter Sino-U.S. trade war remains the biggest concern for markets, with signs of weakening corporate profits, a steep sell-off in tech stocks and rising U.S. interest rates encouraging investors to take money off the table before year-end.

“And that’s all tying in to worries about the global economy,” Oliver added.

Singapore warned earlier on Thursday that trade frictions will likely hurt economic growth in the city state, widely seen as a bellwether for international trade and investment.

E-Minis for the S&P 500 were up about 0.2 percent while FTSE futures were mostly flat and spreadbetters signaled a subdued start for Germany.

Overnight in Wall Street, the benchmark S&P 500 stock index ended higher but near session lows while the Dow gave up its gains to end flat ahead of the U.S. Thanksgiving holiday in a sign of lingering bearishness.

Investors are looking to a meeting between President Donald Trump and his Chinese counterpart Xi Jinping late this month for any signs of a de-escalation in the trade war between the economic superpowers.

Trump and Xi plan to meet on the sidelines of a G20 summit, which is being held in Argentina at the end of November and early December.

The United States and China have slapped import duties on each others’ goods in a tit-for-tat tariff war that investors worry could put the brakes on global trade and growth.

Chinese investors are not optimistic about any progress at the Trump-Xi talks, but are leaving room for surprises.

“Mr. Trump is unpredictable,” said Lin Lu, a professional investor in Shanghai. “You never know when he’ll do an about-face.”

Even a breakthrough on trade would only remove some of the pressure on China’s cooling economy, which is facing a slowdown in domestic consumption.

Markets will also pay close attention to manufacturing activity reports from Japan, Europe and the United States due over the coming week or so.

“PMIs have held up reasonably well so far but if they trend lower it could add to the nervousness,” AMP’s Oliver said.

The synchronized global expansion that began roughly two years ago has now plateaued, and fresh signs are emerging of a weakening outlook. Global trade volumes are still increasing, although at a slower pace.

Moreover, leading economic indicators monitored by the OECD have weakened since the start of the year and point to slower expansion ahead for the United Kingdom and the euro area.

The Federal Reserve has stayed on its tightening path after ending seven years of near-zero interest rates in December 2015 that took the Fed funds rate to the current 2.00 to 2.25 percent. Investors expect the Fed to go up again in December.

In response to the tightening, the U.S. dollar has outperformed most of its peers this year with its index against a basket of major currencies up almost 5 percent. In comparison, the Japanese yen is flat so far in 2018.

“It can shine both in risk-off sessions given its status as the world’s reserve asset, and on risk-on days as wide yield differentials brighten its carry appeal,” he said.

The dollar index eased to 96.566 while the yen paused at 113 per dollar following two straight sessions of losses.

The euro rose on hopes that the Italian budget dispute would be resolved even as the European Commission took its first step toward disciplining Italy over its deficit. It was last at $1.1406.