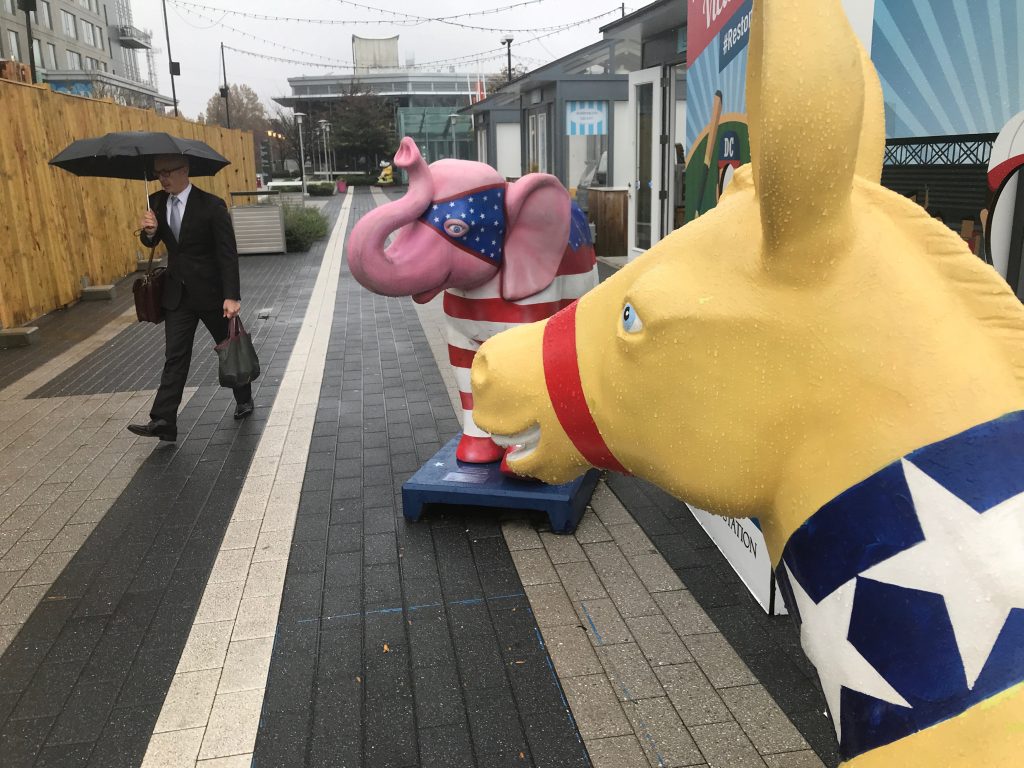 On the eve of the midterm election, Democrats and Republicans scrambled Monday to make their last-minute appeals in a campaign marked by rhetoric about undocumented immigrants and a bitter debate over the presidency of Donald Trump.

In rallies, Trump has talked in apocalyptic terms about the threat of a caravan of migrants slowly making its way toward the U.S. border and chaotic consequences that will occur if Democrats gain control of Congress. On Monday, Trump hit the Midwest with final rallies in Cleveland; Fort Wayne, Ind.; and Cape Girardeau, Mo. – a furious finish to his marathon of 11 rallies in eight states across six days.

And in a nationwide phone call meant to rally supporters Monday morning, Trump ticked off a number of accomplishments on the economy and in other areas, but said “it’s all fragile.”

Meanwhile, former president Barack Obama and other Democrats are making their own closing arguments, accusing Trump of fearmongering and criticizing Republicans over health care and who deserves credit for the country’s recent economic gains.

At stake Tuesday is control of the House and the Senate, 36 governorships and hundreds of down-ballot races nationwide. Dueling rallies this past weekend pitted the president against his immediate predecessor as the two lashed out at each other in highly personal terms.

In an early morning tweet, Trump said: “Law Enforcement has been strongly notified to watch closely for any ILLEGAL VOTING which may take place in Tuesday’s Election (or Early Voting). Anyone caught will be subject to the Maximum Criminal Penalties allowed by law.”

Shortly before Trump’s tweets, the Justice Department announced that it would deploy personnel to 35 jurisdictions in 19 states to “monitor compliance with voting rights laws.”

The governor’s race in Georgia continued grappling with political fallout from a “hacking” investigation into Democrats that was launched at the last minute Sunday by Georgia’s secretary of state, who also happens to be the Republican gubernatorial candidate.

But neither Brian Kemp’s office nor his campaign has provided evidence that Democrats tried to hack the system.

Stacey Abrams, the Democratic gubernatorial nominee, told the Atlanta Journal-Constitution that her opponent’s investigation of possible hacking of the state’s voter registration system is an attempt “to distract voters with a desperate ploy.”

The focus on immigration and the power shift at stake Tuesday have triggered unprecedented turnout in some areas for a midterm election.

In El Paso, for instance, the 12-day early voting period that ended Friday saw 139,000 El Paso residents cast ballots – more than three times the 2014 early voting turnout. The town has historically had among the lowest turnout rates among major U.S. cities, but it is now on track to at least double its total 2014 turnout of 82,000 votes.

El Paso is home to Democratic Senate nominee Beto O’Rourke, whose challenge to Republican incumbent Ted Cruz has drawn national attention and a cascade of cash from donors to fuel both sides.

In a phone call with more than 200,000 supporters Monday morning, Trump said the media is casting the election as a referendum on him. Regardless of whether that’s true, he said, “that’s the way they’re going to play it. If we don’t have a good day, they will make it like it’s the end of the world.”

“Get your friends. Get everybody. Go out and vote,” Trump told those who dialed into the phone call. “The election tomorrow is very vital because it really is summing up what we’ve done.”

Over the weekend, Trump devoted much of his rallies to personal attacks on his predecessor, saying that Obama “did not tell the truth” when he told Americans that “you can keep your doctor, you can keep your plan” under his signature health-care legislation.

“He said it 28 times, and it wasn’t true,” Trump told the crowd Sunday in Macon, Ga.

Obama delivered a blistering critique of Trump, accusing the president and Republicans of “just making stuff up” and mocking them for claiming ownership of economic gains that began on his watch.

“The economy created more jobs in my last 21 months than it has in the 21 months since I left office,” Obama said in Gary, Ind. “So, when you hear these Republicans bragging about, ‘Look how good the economy is,’ where do you think that started? Somebody had to clean it up. That’s what a progressive agenda did.”

Both Trump and Obama have campaigned especially hard in Georgia, where the close race for governor has drawn national attention.

At a rally Sunday, Trump took a particularly harsh line on the immigration issue as he vowed to cut foreign aid to Central American nations he said had done nothing to stop a group of migrants traveling toward the United States.

“How about that caravan? Do you want to let that caravan just pour in?” Trump asked in Macon, Ga., as the crowd answered with a chant of, “Build that wall.”

The group of migrants now numbers about 4,000 and remains in Mexico, hundreds of miles and weeks away from the U.S. border. Trump has described the approaching caravan as “an invasion,” and has ordered more than 7,000 active-duty troops to deploy along the Mexican border in Arizona, California and Texas.

A monthly jobs report Friday showed that hiring and wages grew more than they have in nearly a decade, a boon for Trump and Republicans on the verge of the election. But to the chagrin of some leading members of his party, Trump has responded by de-emphasizing the economy and stoking fears about illegal immigration among his mostly white supporters in an attempt to increase Republican turnout.

A commuter walks past a symbolic Republican elephant and Democratic donkey at the Wiehle-Reston East Metro station in Reston, Virginia, Monday, one day before U.S. congressional midterm elections.