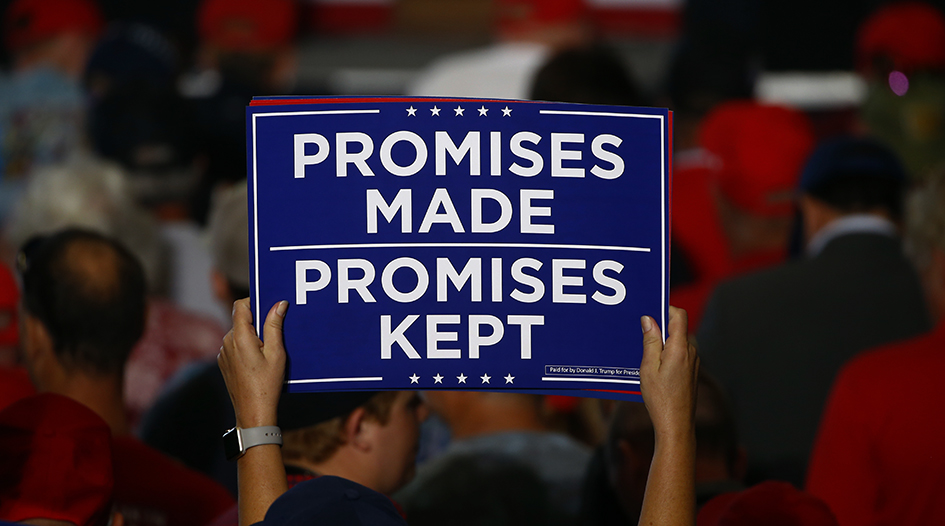 President Donald Trump and Democrats are delivering competing closing arguments during the final weekend before Tuesday’s elections, but their messages are complicated by a deadly shooting in a politically pivotal state.

Trump aimed to drum up voter turnout with events Saturday in Belgrade, Montana, and Pensacola, Florida, about 200 miles west of Florida’s capital, Tallahassee, where two people were shot to death and five others wounded on Friday night.

Vice President Mike Pence helped embattled Gov. Scott Walker, R-Wis., and then was meeting up with Trump in Florida to rally Republicans behind Rick Scott, who is trying to unseat Democratic Sen. Bill Nelson, and former Rep. Ron DeSantis, who hopes to succeed Scott as governor.

DeSantis has been in a tight contest against Tallahassee Mayor Andrew Gillum, who broke off campaigning after the shooting in his hometown. Gillum had appeared earlier Friday with former President Barack Obama.

Democrats were fanning out across the country to help the party stoke turnout in their effort to capture seats in Congress and win several races for governor. Former Vice President Joe Biden was campaigning in Ohio with former Obama administration official Richard Cordray, who is attempting to become governor in a high-profile contest.

A look at campaign activities on Saturday:

The final stretch of the campaign was briefly disrupted by the shooting Friday evening in Tallahassee.

Scott and Gillum both rushed back to the state capital after the gunman killed two people and injured five others before killing himself.

Shortly before midnight, Gillum and Scott met with victims who had been taken to a hospital near the shopping center where the shooting took place. Gillum, who has clashed with Scott in the past, thanked the governor for his “care and consideration” by visiting the victims.

Both Gillum and Scott planned to return to campaigning on Saturday with stops in central Florida. Scott was expected to be with Trump when he holds a rally later in the day in Pensacola, while Gillum was to attend a get out the vote concert with Jimmy Buffett in West Palm Beach.

DeSantis, Gillum’s Republican opponent in the governor’s race, has repeatedly criticized Tallahassee’s crime rate in his campaign speeches. Police have not yet identified a motive behind the shooting.

In Montana, Trump pushed back on criticism that he is focusing too much on immigration rhetoric during the closing days of the election season.

Trump said during his rally that he also talks about economic gains, but can only “go for four or five minutes.” After that, he said, “what I do is talk about some of the problems.”

Said Trump: “When we’re fixing a problem or fixed a problem there’s no reason to go on about it for 45 minutes.”

In Georgia, a robocall apparently paid for by a white supremacist group directly injected racism into a governor’s race already fraught with race-laden debates over ballot access and voter suppression.

Democrat Stacey Abrams and Republican Brian Kemp joined together in condemning the automated telephone call that featured a voice impersonating Oprah Winfrey, the billionaire media star who campaigned in Georgia for Abrams Thursday.

The call concluded by saying it was paid for by The Road to Power, a group organized by Scott Rhodes of Idaho, who has been linked to several other incendiary robocalls, including a recent effort in Florida, where Gillum would become the first black governor in state history.

Kemp issued a statement calling the tactic “vile” and “contrary to the highest ideals of our state and country,” adding a condemnation of “any person or organization that peddles this type of unbridled hate and unapologetic bigotry.”

Abrams’s campaign also blasted the move but criticized Kemp and Trump, who will campaign together in Georgia Sunday. The campaign said Trump and Kemp had contributed to a poisonous atmosphere and Kemp has been silent on previous racially loaded attacks on Abrams.

Campaigning in Wisconsin, Pence pushed back against the notion that Democrats will sweep to victory in Tuesday’s elections.

“I keep hearing about this blue wave,” Pence said. “Let’s make sure that blue wave hits a red wall in the Badger State.”

Pence and Walker addressed more than 500 supporters in northwest Wisconsin, where the two-term governor told them, “I need your help now more than ever.” Walker noted that recent polls have shown him tied with Democrat Tony Evers.

Pence pointed to the caravan of immigrants traveling through Mexico toward the U.S. southern border and claimed it was “being driven by the dangerous policies of Democrats.” The audience chanted, “Build that wall!”

Hundreds of northwest Wisconsin Republicans huddled together in 40-degree temperatures waiting to enter the shipping warehouse in Hudson, Wisconsin, where Pence rallied supporters for Walker.

Walker is in a fight for his political career just three days before the election. Polls show Walker knotted with Evers, Wisconsin’s superintendent of schools.

Walker needs to shore up northern Wisconsin and turn out conservatives in the suburban counties around Milwaukee to overcome intensity among Democratic-leaning voters in Milwaukee and Madison. Walker has defied the odds before, beating a recall election in 2012 mounted after he signed controversial legislation in 2011 stripping public employees of union rights.