Auction House to Sell Off Early Map of NYC Subway 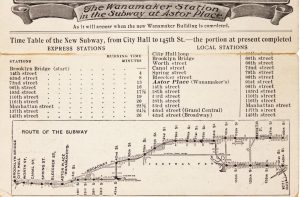 A New York City gallery will be putting historical maps up for display next month, include one that is believed to be the one of the first portable maps of the city’s subway system.

The 1904 portable subway map was apparently mailed to customers of Wanamaker’s department store when a ride cost just a nickel. The Martayan Lan Gallery will display the subway map starting Nov. 9 with a sale price of $12,000.

The map refers to the Interborough Rapid Transit Company, a private company that originally operated the city subway line that opened in 1904.

Other historical maps will be on display and up for sale, including a wall map from 1898 that is described as the earliest to depict the five boroughs consolidated into the greater New York City area.