We Need to Mourn 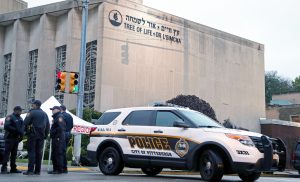 “We need to mourn” now eclipses last week’s GA title in Israel, “We need to talk.” Less than one week after the General Assembly of the Jewish Federations of North America met in Israel, the Pittsburgh tragedy stands to modulate the contentious tone adopted by non-Orthodox Federation members towards much of their brethren in Israel. Because the massacre underscores the need for a more unified front among Diaspora Jews to confront anti-Semites.

Or so we hope. It is difficult to know whether the tragedy would have altered the lens through which the GA’s participants view Israel. Might it have produced a more conciliatory tone from the Federation towards Israel and Israeli policy? Would it have changed the choice of host city Tel Aviv over Jerusalem (a less than subtle jab at Trump’s Israeli embassy move) or prompted an invitation to more participants from the Orthodox and settlers over the Green Line?

When violent anti-Semitism strikes Diaspora Jews, the implications of having a Jewish country become all the more compelling. Especially a Jewish country that welcomes all Jews, regardless of their affiliation or non-affiliation. The horror at the Tree of Life congregation was an aberration on American soil, but anti-Semitism is the world’s oldest and most popular scourge. And while no one suggests that American Jews need fear for their lives, European Jews have already learned that a secure homeland is the surest protection against Jew hatred.

Which is why it is more important than ever for America’s non-Orthodox Jews to remain steadfast supporters of their homeland on Israel’s terms, those terms being the safest for Israel and for Jews. And not on terms specific to the GA, whose members came to Israel last week with the express purpose of unloading their resentment towards Israel’s handling of religion and state issues.

Rather than seek mutual dialogue with Israelis, the GA’s three day extravaganza gave vent to the Federation’s almost monolithic critical approach towards Israel’s religious and security practices. This, despite professing commitment to the State of Israel. In light of this week’s tragedy, it is all the more unseemly and dangerous.

Eric Goldstsein, CEO of New York’s UJA-Federation defined this attitude. “The Jewish identity of many young American Jews is reflected through the lens of tikkun olam, social justice values,” Goldstein said. “And they experience a mental discomfort when they use that lens to look at many current Israeli government policies: settlement policy, Nation-State law, treatment of asylum seekers, marriage equality and marriage rights — more broadly, the monopoly that the Orthodox has over religion and state in Israel.”

Boiled down, non-Orthodox American Jews resent their inability to influence their Israeli brothers’ handling of their own sovereign nation. They are angered by Israel’s embrace of President Trump and his pro-Israel agenda and Israel’s dismissal of religious pluralism. Had Israel aligned its governing policies with the dangers of a leftist tikkun olam mindset, the title of the GA summit would likely have been, “We need to celebrate.”

But the very policies that these American Jews oppose are the very ones that ensure Israel’s physical and spiritual survival. And by extension, the physical and spiritual survival of Jews everywhere. Israel should never have to apologize for the “mental discomfort” of those who choose liberalism over Judaism. Israelis, both Orthodox and non-Orthodox, who safeguard the Jewish state and religion should not be guilted into lowering those safety bars.

Sadly, the Pittsburgh massacre uncorked even more progressive rhetoric from many non-Orthodox Jews, eager to manipulate a tragedy and blame Trump and his ilk for the violence. Despite the fact that the perpetrator was a Trump opponent. Although the attack on the Pittsburgh synagogue attests to anti-Semitic dangers from neo-Nazis and their ilk, the hate from the left is far more pervasive. Because, unlike screaming, “All Jews must die” in a murderous rampage, it is a hate that insidiously chips away at what is considered “acceptable” among progressives.

This summer’s Unite the Right rally in Washington D.C., on the anniversary of the Charlottesville riot, drew only 20-30 protestors, dwarfed by thousands of counter-protestors. Whereas the social justice warriors of the tikkun olam brand have infiltrated and poisoned American campuses and the mainstream media to the point that Louis Farrakhan can call Jews “termites” with smug impunity and nothing but a slap on the wrist from the left.

The threat is especially acute in the political sphere, where rhetoric translates into policy. Yet, progressive Jews, alienated from both Judaism and Israel, enthusiastically endorse anti-Israel mid-term candidates, almost all on the Democrat ticket, despite their record. And despite the fact that they pose a far greater threat to the Jewish people. Like Betty McCollum (D-Minn.), who accused Israel of being an “apartheid” state apropos of Israel’s Nation-State law and upstate New York Democrat congressional candidate Antonio Delgado, who claimed Israel “is not a Jewish democracy” because of its “settlements.”

Many Floridian Jews support Democrat gubernatorial candidate Andrew Gillum, aligned with prominent anti-Semitic organizations like Dream Defenders, that promote BDS. And New York Democrat Senator Kirsten Gillibrand, who withdrew her sponsorship of an anti-BDS bill while cozying up to Israel hater Linda Sarsour.* Then there are openly anti-Israel congressional candidates in Michigan and Minnesota and the new darling Democratic Socialist Alexandria Ocasio-Cortez, who called Israel’s defensive actions at the Gaza border a “massacre.”

The list goes on and on. This is the menace Jews need to be wary of, not join ranks with. Anti-Zionism as a form of anti-Semitism has become part of the fabric of the progressive agenda, and Jews who lack their own identity are signing on, seemingly oblivious to the concept of self-preservation. The unfortunate juxtaposition of the GA summit and the Pittsburgh tragedy should underline the need for Jews, who are truly concerned with their well-being, to be honest enough to recognize and confront that danger within.

* An interview with Senator Gillibrand appears in the News section of this week’s edition.