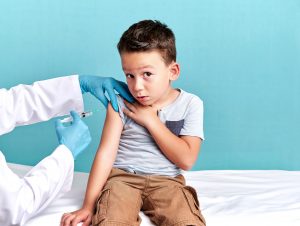 That’s just one of the frustrations faced by health officials in the first year after California did away with “personal belief exemptions” that allowed parents to send their kids to school unvaccinated, according to a study published Monday in the journal Pediatrics.

In the 2014-15 school year, when parents could still opt out of vaccinations for any reason they chose, only 90.4 percent of kindergarteners in California public schools were fully immunized. That’s below the 94 percent threshold needed to establish community immunity for measles, according to experts.

Gaps like that helped persuade state lawmakers to pass Senate Bill 277, which was signed into law in 2015. It requires every child taught in public school classrooms to be fully immunized against 10 diseases: diphtheria, hepatitis B, haemophilus influenzae Type B, measles, mumps, pertussis (a.k.a. whooping cough), poliomyelitis, rubella, tetanus and varicella (a.k.a. chickenpox) — unless a doctor provides a medical reason for why it would be unsafe to do so.

It was the first time in 35 years that a state had gotten rid of personal belief exemptions, and it made California only the third state — along with Mississippi and West Virginia — to have such a strict requirement.

By the most basic measure, it worked. In the 2017-18 school year, 95.1 percent of kindergarteners had all of their immunizations, according to the California Department of Public Health.

However, the elimination of personal belief exemptions was offset to some degree by an increase in medical exemptions. Before the passage of SB 277, only 0.2 percent of students had a medical exemption, the health department said. By 2017-18, that figure had more than tripled, to 0.7 percent.

Part of that increase was legitimate, the study authors explained: Some parents whose children could have qualified for medical exemptions obtained personal belief exemptions instead because they were easier to get.

But many of the additional medical exemptions were bogus, health officials suspect. Though they’d like to crack down and see more kids get vaccinated, there are numerous obstacles in their way, the new study revealed.

The authors, led by Salini Mohanty of the University of Pennsylvania, reached out to members of the Health Officers Association of California to get their perspective on SB 277. Forty people responded, including immunization coordinators, communicable disease directors and public health nurses. Together, they represented 35 of California’s 61 local health jurisdictions.

Study participants spoke with the researchers for 15 to 57 minutes each. Here’s what they learned:

Some medical exemptions are dubious on their face.

Health officials told the study authors that parents submitted exemptions that said it was unsafe to vaccinate their children because they had a family history of allergies or autoimmune disorders. Neither of these are valid reasons, according to the Centers for Disease Control and Prevention’s Advisory Committee on Immunization Practices.

Another source of skepticism was the people who signed the medical exemptions. Some were nurse practitioners, who aren’t authorized to do so. Others were cardiologists, dermatologists or surgeons, who typically don’t treat children.

One immunization coordinator shared this far-fetched example: “There’s one who’s like a medical marijuana dispensary. And I’m like, really? He’s a primary care physician for these kids?”

Medical exemptions can be had for a price.

In one case, study participants said a doctor charged patients to watch a video in exchange for signing an exemption. Another told of a physician who charged for medical tests before vouching for an exemption. In some cases, doctors openly advertised their willingness to sign exemptions for a fee.

Another immunization coordinator described a doctor who switched from giving permanent exemptions to offering temporary ones: “The parents are being basically duped. They’re being told you have to renew this every three months. Well, that’s not true …. It’s a business decision on her part.”

Members of local health agencies said they were not able to challenge questionable medical exemptions.

The way SB 277 was set up, parents submit medical exemptions directly to their child’s school. If the school nurse or someone else on campus reaches out for guidance, health officials may weigh in. Otherwise, the matter is out of their hands.

This was a major source of frustration to officials interviewed in the study. Here’s how one participant from an urban health district put it: “The law didn’t give the health officer any role, and I’ll tell you how ridiculous this is …. I get to see medical records of dogs, and I have the authority to disapprove requests for exemptions for rabies vaccines … and for people, we don’t have that authority.”

Health experts would like the California Medical Board to get tougher on doctors who approve questionable exemptions.

Many of those interviewed complained that there were no consequences for physicians who supported “problematic” exemptions.

There has been one high-profile exception to this rule since the interviews were conducted, the study authors noted: Dr. Bob Sears, an Orange County pediatrician who is a vocal critic of the CDC’s vaccine schedule, was put on probation for 35 months after issuing a medical exemption for a two-year-old boy without conducting an exam first. The board’s actions may serve as a deterrent to other doctors, the authors wrote.

Simply keeping track of medical exemptions is enough to make you a target.

Only five jurisdictions made an attempt to monitor medical exemptions in the first year after SB 277 went into effect, and one of them was hit with a federal civil lawsuit from parents and nonprofit groups. The suit was eventually withdrawn, but officials who didn’t want to get dragged into court cited the case as a reason not to track exemptions in their area.

“It was really a way to try and scare us away from doing our job and to signal to other local health officers that this is what they have coming to them if they continue to do their job,” an urban health officer told the interviewers.

Opponents of SB 277 made things personal.

An official whose agency was named in the lawsuit said their decision to track medical exemptions resulted in “hate mail and death threats across all social media.” The agency continued with its tracking anyway, the official added.

The system has a built-in conflict of interest.

The people who decide on the validity of medical exemptions are school nurses, health clerks, registrars and other staff on campus. But these people are acutely aware that they lose state funding every time a student is absent from school.

“All of our schools are so small, and there is an impact when kids don’t enroll or if they aren’t able to go to school,” an immunization coordinator from a rural district told the study authors.

In many cases, medical exemptions are just personal belief exemptions in disguise.

And if doctors keep stretching the rules — and getting away with it — it will be like SB 277 never existed, leaving kids susceptible to outbreaks of infectious diseases.

“We saw a fourfold increase in medical exemptions,” one study participant said. “If that continues to occur, we may just be in the same position as before with parents pursuing medical exemptions when they’re really personal belief exemptions.”