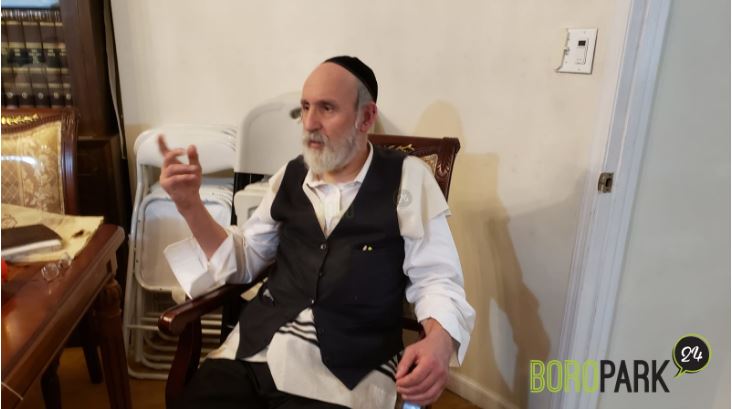 A Jewish man walking to shul Sunday morning was assaulted in a seemingly random attack by a passing car-service driver with a history of violence, but the District Attorney’s office did not charge him with a hate crime.

Multiple videos of the assault show Lipa Schwartz, the 62-year-old victim, standing on 13th Ave. and 46th Street and holding his tallis bag when a Lincoln Town Car from Church Ave. Car Service pulls up.

The driver, Afzal Farrukh of Staten Island, runs out, approaches Mr. Schwartz and begins beating him. The victim runs off in an attempt to escape and falls onto the avenue.

Farrukh, 37, grabbed Mr. Schwartz and continued beating and shoving him for about 25 seconds until another Jewish man approached. The assailant then dropped his victim and chased the second Jew, who ran onto a city bus waiting by a red light.

Members of the Boro Park Shomrim responded within minutes and held the suspect at the scene until he was taken into police custody.

In an interview, Mr. Schwartz said that he “feared for my life” during the minute of the assault.

“I knew it’s either I fight myself out of this or I might be dead,” he told BoroPark24. “Baruch Hashem, I’m out of the hospital with some minor bruises, but the trauma of being attacked by someone … will stay with me forever.”

Elected officials weighed in on the attack.

“I’m horrified by this unprovoked vicious assault on an elderly member of our community,” tweeted Barry Spitzer, the district manager of Community Board 12. “Justice needs to be served swiftly and fully.”

The victim was seen on video standing up on his own and walking to retrieve his tallis bag. Hatzolah transported him to the hospital for a checkup for minor injuries and bruises. He was released after several hours.

In an interview with Hamodia, Shia Langsam said he was walking in the left lane on 13th Avenue at 43rd Street when a car veered from the right lane towards him and nearly hit him. “I jumped back in order to avoid being hit by his car. The car then sped off, and passed through a red light.”

Langsam reported that he watched the car from that point on, and followed it on foot as it preceded to 46th Street. At that point, the driver exited his car and began hitting Mr. Schwartz. During the assault, the assailant was yelling in a foreign language which the bystanders could not comprehend.

Upon his arrest, the police charged Farrukh with assault as a hate crime. But the DA did not charge him with a hate crime, arraigning him on charges of assault, attempted assault, menacing and harassment.

Rabbi Yanky Meyer of Misaskim told Hamodia that he believes Farrukh should indeed be charged with a hate crime.

“When you see two acts that are done deliberately toward an Orthodox Jews, how can you not label them a hate crime? Watch the videos, and see how he jumped the light, he didn’t stop for a split second. If there had been a school bus or any other vehicle there, he couldn’t have cared less. He was on a rampage that morning and out to harm Jews.”

A Church Ave. Car Service supervisor said that the driver was off duty on Sunday and wasn’t driving for the company at the time of the assault.

Farrukh has an extensive police record of violent assaults, with a reported eight previous arrests. The Staten Island Advance reported last year that he was arrested for chasing a neighbor with a shovel and damaging the victim’s car after the two got into an argument about money.