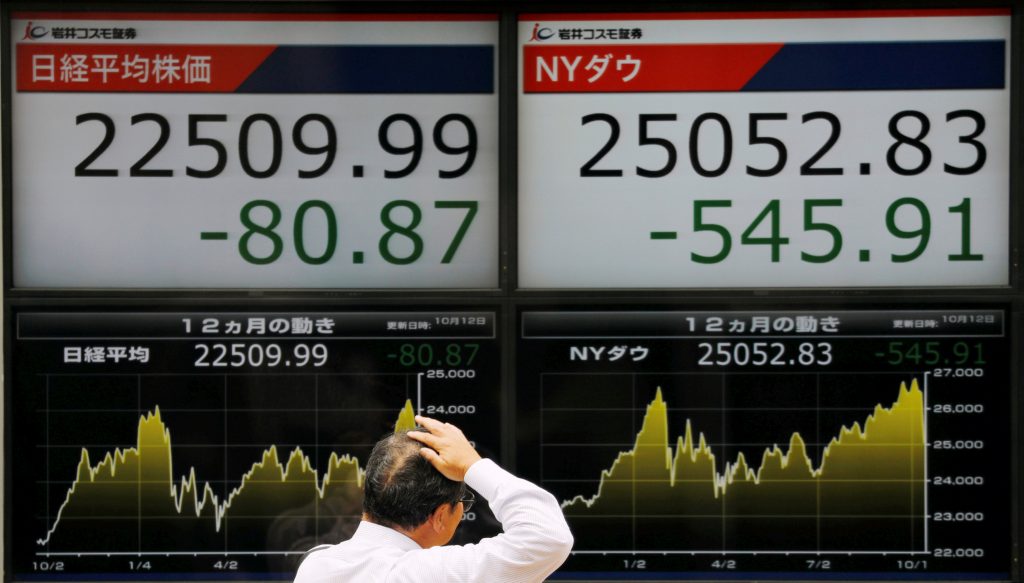 Asian shares staged a rebound on Friday to set course for their first gains in two weeks, with Shanghai managing a modest recovery from a rout that saw its shares crumble to near four-year lows.

The strong gains soothed investor sentiment, which was hit after a major volatility index, seen as Wall Street’s fear gauge, rose to an eight-month high.

But the bounce came after the index fell 3.6 percent on Thursday to hit a 1½-year low. On the week, it is still on track for a weekly loss of 3.6 percent.

The biggest market shakeout since February has been blamed on a series of factors, including worries about the impact of a Sino-U.S. trade war, a spike in U.S. bond yields this week and caution ahead of earnings seasons.

Japan’s Nikkei average rose 0.5 percent while U.S. stock futures gained 1 percent in Asian trade on Friday, in part helped by the media report that the U.S. Treasury Department will not call China a currency manipulator in its upcoming semiannual report.

“The (U.S. share) market is now about 7 percent off of its 100-day high, but this is far from a rare occurrence historically,” economists at RBC Capital Markets wrote in a research note.

“Indeed, history is littered with over 5 percent-ish type selloffs in the midst of economic expansions,” they said.

“The sharp sell-off we are seeing in the market has left a lot of folks wondering if this is the beginning of the end. Investors shouldn’t panic,” said Christopher Smart, head of macroeconomic and geopolitical research at Barings.

“So far, it has the feel of a temporary correction that will take some of the excess air out of tech stocks. But the volatile markets mean that economic data and corporate earnings will get even closer scrutiny in the weeks ahead. ”

Chinese trade figures on Friday showed, however, that China’s trade surplus with the United States hit a record high in September, providing a likely source of contention with President Donald Trump over trade policies and the currency.

The data showed solid expansion in China’s overall imports and exports, suggesting little damage from the tit-for-tat tariffs with the United States.

CBOE Volatility index rose on Thursday to its highest close since Feb 12, pointing to investors concern of further losses in markets.

So far this week, Chinese and U.S. shares are among the worst performers in a sign that investor worries about the trade war are deepening.

MSCI’s U.S. index has shed 5.5 percent, compared with a 4.9-percent fall for MSCI’s gauge of stock performance in 47 countries. China A shares are still down 8.7 percent.

Gold, typically seen as a safe-haven asset at times of high uncertainty, held steady on Friday. It fetched $1,221.9 per ounce, keeping the 2.5 percent gain from Thursday, which was its biggest percentage rise since June 2016.

The yield on 10-year U.S. notes edged up 4.5 basis points in Asia to 3.176 percent, reversing earlier falls on flight-to-quality bids.   It is still off its seven-year high of 3.261 percent touched on Tuesday, but a further rise in the U.S. borrowing costs could hurt risk sentiment.

“Asian stocks appeared to have stabilized but ultimately where U.S. bond yields will settle down will be key,” said Teppei Ino, senior analyst at MUFG Bank.

Adding confusion for investors, Trump launched a second day of criticism of the Federal Reserve on Thursday, calling its interest rate increases a “ridiculous” policy.

While that does not appear to have shaken investor confidence in the Fed’s independence, some investors suspect expectations on future rate hikes could be undermined if Trump raises his threats levels.

“I doubt Trump will tolerate further rise in U.S. rates ahead of U.S. mid-term elections. I believe the rise in U.S. yields and the dollar’s rally are coming to a turning point,” said Naoki Iwami, fixed income chief investment officer at Whiz Partners in Tokyo.

The dollar lacked momentum against a basket of major currencies as U.S. bond yields stayed off recent peaks.

The Chinese yuan weakened about 0.3 percent, giving up some of the gains it had made the previous day.