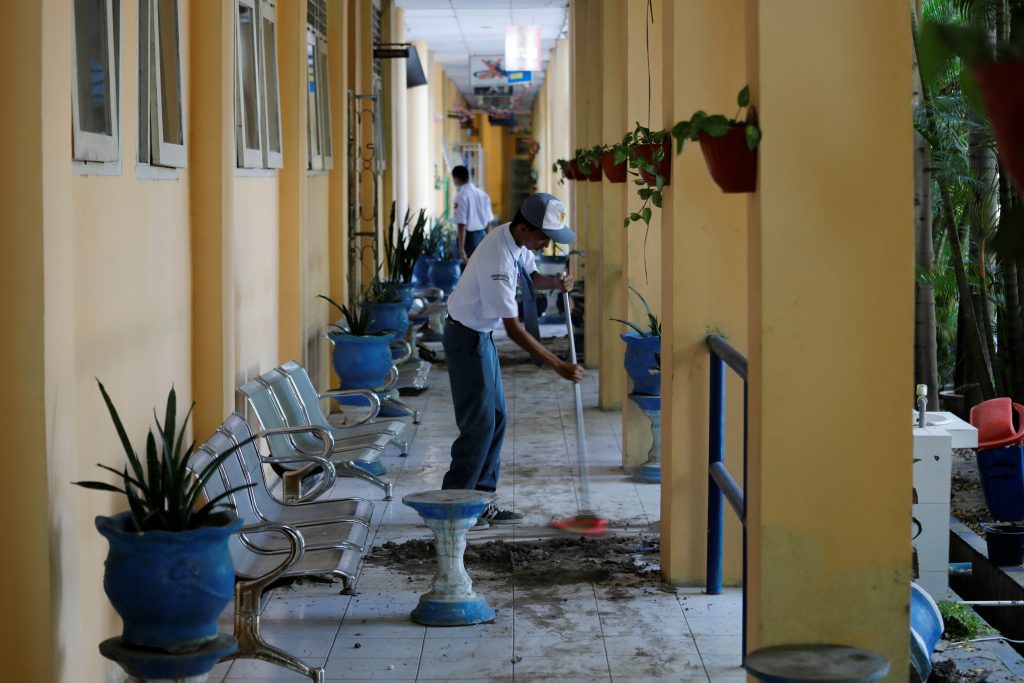 Children in the Indonesian city of Palu began returning to school on Monday to tidy up their classrooms and to help gather data on how many of them will be coming back 10 days after a major earthquake and tsunami hit their city.

The 7.5 magnitude quake on Sept. 28 brought down many buildings in the small city on Sulawesi island, 300 miles northeast of Jakarta, while tsunami waves smashed into its beachfront.

But the biggest killer was probably soil liquefaction, which happens when a powerful quake turns the ground into a liquid mire and which obliterated several Palu neighborhoods.

The official death toll is 1,763 but bodies are still being recovered. No one knows how many people are missing, especially in the areas hit by liquefaction, but it could be as high as 5,000, the national disaster agency said.

At one state high school, teenagers dressed in grey and white uniforms swept up broken glass in the classrooms. Trophies had fallen from a broken school showcase and the basketball court was cracked.

“It’s sad to see our school like this,” said Dewi Rahmawati, 17, who expects to graduate next year and wants to study economics at university.

The students found out that they had to turn up to school through messages on social media.

School principal Kasiludin said authorities told all teachers to show up for work from Monday to collect information on student numbers.

“We won’t force the students to come back because many are traumatized. But we must start again soon to keep their spirits up and so they don’t fall behind,” he said.

The school had lost at least seven students and one teacher, he said.

At the SMP Negeri 15 Palu middle school, fewer than 50 of its 697 students showed up.

School principal Abdul Rashid said he was aware of four students killed in the quake.

“Classes haven’t started. We’re only collecting data to find out how many students are safe,” he said.

“I’m still waiting for the Ministry of Education to give us instructions on when to begin classes. For now, I don’t think we’re ready. Many children are traumatized and frightened.”

One boy chatting in the school compound with friends said he was disappointed that so few of his classmates had shown up.

“I haven’t heard from so many of them. I want to think positively; I hope they are OK,” said Muhamad Islam Bintang Lima, dressed in the school uniform of white shirt and navy blue trousers.

Most of the dead from the quake and tsunami were in Palu, the region’s main urban center. Figures for more remote areas are trickling in but they seem to have suffered fewer deaths than the city.

Sulawesi is one of Indonesia’s five main islands. The archipelago sees frequent earthquakes and occasional tsunamis.

In 2004 a quake off Sumatra island triggered a tsunami across the Indian Ocean that killed 226,000 people in 13 countries, including more than 120,000 in Indonesia.

A spokesman for the national disaster mitigation agency said on Sunday searches for bodies would stop on Thursday.

Debris would be cleared and areas hit by liquefaction would be turned into parks, sports venues and other public spaces, the spokesman said.

Indonesia is hosting an International Monetary Fund/World Bank meeting on the resort island of Bali this week, which has drawn some criticism from the political opposition.

“What is the benefit for us Indonesian people, especially in this time of catastrophe,” Fadli Zon, deputy speaker of parliament from the opposition nationalist Gerindra Party, said on social media, taking issue with government spending on the meeting.

The government has allocated $37 million to help victims of the earthquake.