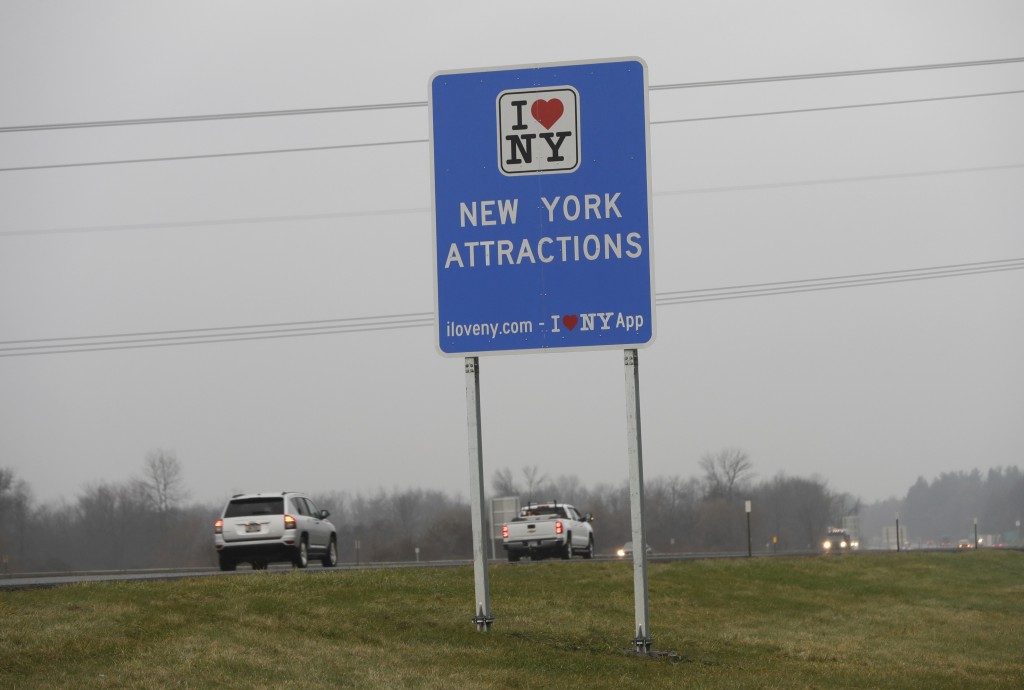 The deadline for removing New York’s “I Love NY” highway signs is fast approaching, and neither the state nor the federal government seems to be backing down.

Without a deal by month’s end — Sunday — New York could lose $14 million in federal highway funding.

Mike Reynard, a spokesman for the Federal Highway Administration (FHWA), told The Associated Press this week that his agency and state Department of Transportation officials continue to discuss the issue.

“We are still discussing with the federal government what changes they want to the signs,” Democratic Gov. Andrew Cuomo told reporters Wednesday in Buffalo.

The big blue signs posted in groups of five along roadways from Long Island to Buffalo were touted by Cuomo as a key component in his effort to boost the state’s $100 billion tourism industry. But even before the first of the 514 signs were erected in 2013, the Federal Highway Administration warned state officials that the advertisements didn’t adhere to regulations, contained too much information and were too distracting to drivers.

Cuomo went ahead with the $8 million program anyway.

State DOT officials contend there’s no evidence any of the signs have directly contributed to any accidents.

“We continue to work cooperatively with FHWA to resolve any remaining issues and will provide an update soon,” Joseph Morrissey, a state DOT spokesman, said in an email this week.

The series of signs feature logos for four specific tourism categories under the italicized words “The New York State Experience.” The next four signs feature those categories: “Attractions,” ”History,” ”Eat & Drink” and “Recreation.” At the bottom of each sign are the state tourism office’s internet site — iloveny .com — and a promotion for the “I Love NY” app.

Officials with the FHWA, part of the U.S. Department of Transportation, say that’s way too much information for drivers to comprehend while traveling at highway speeds.

New York Republicans, including GOP members of the state’s congressional delegation, have criticized Cuomo over the sign spat, saying it could needlessly wind up costing taxpayers millions of dollars. Marc Molinaro, the Republican candidate challenging the two-term governor in the November election, says there are plenty of other transportation projects that could use that money.

“There are countless highways, bridges, and roadways across the state of New York that could use real benefit from a governor who’s focused on real priorities,” Molinaro said during a recent campaign stop in Utica.