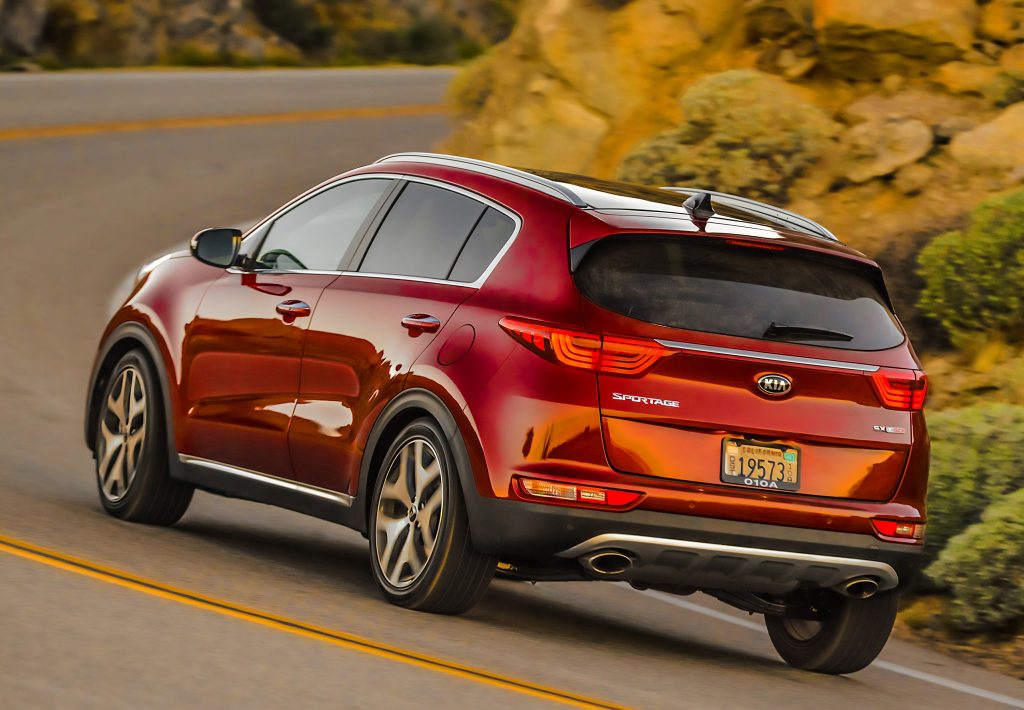 The South Korean car company Kia took the “sport” in sport utility vehicle and turned it into “Sportage” — a word that, as far as I can determine, represents no known thing in any known language.

In the Kia lineup, it represents a perky, personable crossover vehicle that is short on style but long on value.

Driven by a 2-liter, turbocharged four-cylinder gasoline engine that produces 237 horsepower and 260 pound-feet of torque, and is mated to a six-speed automatic transmission, this lightweight SUV also features available all-wheel drive with a locking differential.

Snappy around town, if a little sluggish at freeway speeds, the Sportage is capable of turning into an off-road vehicle with the flick of a switch. On some dirt and gravel roads around Morro Bay, Calif., the car’s 19-inch wheels felt sure-footed and agile.

Driving modes include sporty and economical choices. Though there were only subtle differences between the two, I found the throttle a little twitchy in sport mode — as if the car were a little too eager to show off its turbo power.

On the highway, though, that jumpiness smoothed out. I also found that switching to the economy mode didn’t diminish the driving pleasure much. While that did improve the gas mileage by about 10 percent, it wasn’t enough to get the fuel economy above 24.5 miles per gallon, far below what an economical car should be able to offer.

I also appreciated the fact that the car stayed in its drive mode setting between drives, and didn’t require resetting every time the Kia was started anew.

I was a little disappointed to discover that the cruise control was just a regular, old-fashioned cruise control. It offered none of the adaptive cruise control features that are standard on almost all Honda and Toyota vehicles, such as emergency braking and forward collision mitigation.

Though the Sportage boasts “autonomous emergency braking” as a standard performance feature, I never felt it kick in.

Kia offers the Sportage in LX, EX and SX trim levels. The SX is fitted with the turbo and the other versions with a slightly larger, but less powerful, four-cylinder engine. All three models come in both front-wheel- and all-wheel-drive formats.

The leather-clad interior on this SX trim featured a very good Harman Kardon sound system and an effective HVAC system, with front seat ventilation that was superior to that of many cars in this class. (This feature was welcome after a midday hike in triple-digit temperatures. I admit I did not test the front seat heaters or heated steering wheel under the same conditions.)

Visibility was excellent, and the huge sunroof — optional on the EX and standard on the SX — opened with the push of a single button. The touch-screen entertainment and navigation screen was intuitive and effective.

The rear passenger area offered generous headroom and legroom, plus back-seat ventilation vents — a simple but welcome addition that is missing on a lot of vehicles. The back seat also sported its own speakers, cup holders and USB and 12-volt outlets. The rear windows even lowered all the way.

The designers seem to have been less creative on the outside. The Sportage is so anonymous that, on several occasions, my traveling companion and I walked up to the wrong SUV in a parking lot.

This model was distinguished by a roof rack — standard on the EX and SX trims — and, like other Kias, features a smiling-mouth grill and upturned chin. But from the sides and rear it looks like just another generic crossover.

That’s not necessarily an important point. Consumers drawn to this SUV will be most attracted by Kia’s well-deserved reputation for building quality cars at an affordable price. The entry-level Sportage starts at $24,580. The top-of-the-line SX starts at $36,125.

Like everything else in the Kia stable, all the Sportages come with a 100,000-mile warranty on the powertrain — a warranty that, when it was first offered, seemed risky for the company.

It wasn’t. Many of Kia’s cars ran 100,000 miles or more without problems. Since then, Kia has sold a lot of cars with that warranty, and may sell a lot of these.