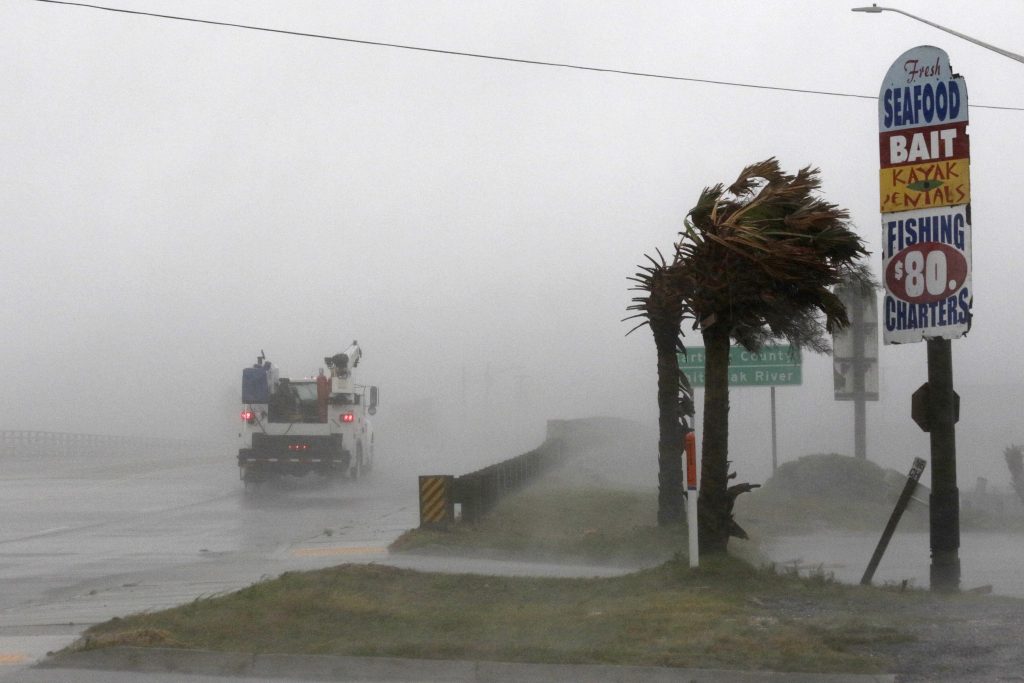 The big slosh has begun, and the consequences could be disastrous.

Hurricane Florence’s leading edge battered the Carolina coast Thursday, bending trees and shooting frothy sea water over streets on the Outer Banks, as the hulking storm closed in with 100 mph (160 kph) winds for a drenching siege that could last all weekend. Tens of thousands were without power.

Winds and rain were arriving later in South Carolina, and a few people were still walking on the sand at Myrtle Beach while North Carolina was getting pounded.

Forecasters said conditions will only get more lethal as the storm smashes ashore early Friday near the North Carolina-South Carolina line and crawls slowly inland. Its surge could cover all but a sliver of the Carolina coast under as much as 11 feet (3.4 meters) of ocean water, and days of downpours could unload more than 3 feet (0.9 meters) of rain, touching off severe flooding.

Florence’s winds weakened as it drew closer to land, dropping from a peak of 140 mph (225 kph) earlier in the week, and the hurricane was downgraded from a terrifying Category 4 to a 2.

But North Carolina Gov. Roy Cooper warned: “Don’t relax, don’t get complacent. Stay on guard. This is a powerful storm that can kill. Today the threat becomes a reality.”

Forecasters said that given the storm’s size and sluggish track, it could cause epic damage akin to what the Houston area saw during Hurricane Harvey just over a year ago, with floodwaters swamping homes and businesses and washing over industrial waste sites and hog-waste ponds.

“It truly is really about the whole size of this storm,” National Hurricane Center Director Ken Graham said. “The larger and the slower the storm is, the greater the threat and the impact — and we have that.”

The hurricane was seen as a major test for the Federal Emergency Management Agency, which was heavily criticized as sluggish and unprepared for Hurricane Maria in Puerto Rico last year.

As Florence drew near, President Donald Trump tweeted that FEMA and first responders are “supplied and ready,” and he disputed the official conclusion that nearly 3,000 people died in Puerto Rico, claiming the figure was a Democratic plot to make him look bad.

Schools and businesses closed as far south as Georgia, airlines canceled more than 1,500 flights, and coastal towns in the Carolinas were largely emptied out.

Around midday, Spanish moss blew sideways in the trees as the winds increased in Wilmington, and floating docks bounced atop swells at Morehead City. Some of the few people still left in Nags Head on the Outer Banks took photos of angry waves topped with white froth.

Wilmington resident Julie Terrell was plenty concerned after walking to breakfast past a row of shops fortified with boards, sandbags and hurricane shutters.

Forecasters’ European climate model is predicting 2 trillion to 11 trillion gallons of rain will fall on North Carolina over the next week, according to meteorologist Ryan Maue of weathermodels.com. That’s enough water to fill the Empire State Building nearly 40,000 times.

More than 1.7 million people in the Carolinas and Virginia were warned to evacuate over the past few days, and the homes of about 10 million were under watches or warnings for the hurricane or tropical storm conditions.

Homeless after losing her job at Walmart three months ago, 25-year-old Brittany Jones went to a storm shelter at a high school near Raleigh. She said a hurricane has a way of bringing everyone to the same level.

“It doesn’t matter how much money you have or how many generators you have if you can’t get gas,” she said. “Whether you have a house or not, when the storm comes it will bring everyone together. A storm can come and wipe your house out overnight.”

Duke Energy Co. said Florence could knock out electricity to three-quarters of its 4 million customers in the Carolinas, and outages could last for weeks. Workers are being brought in from the Midwest and Florida to help in the storm’s aftermath, it said.

As of 5 p.m., Florence was centered about 100 miles (160 kilometers) southeast of Wilmington, its forward movement slowed to 5 mph (7 kph). Hurricane-force winds extended 80 miles (130 kilometers) from its center, and tropical-storm-force winds up to 195 miles (315 kilometers).

Scientists said it is too soon to say what role, if any, global warming played in the storm. But previous research has shown that the strongest hurricanes are getting wetter, more intense and intensifying faster because of human-caused climate change.

Florence’s weakening as it neared the coast created tension between some who left home and authorities who worried that the storm could still be deadly.

Frustrated after evacuating his beach home for a storm that was later downgraded, retired nurse Frederick Fisher grumbled in the lobby of a Wilmington hotel several miles inland.

“Against my better judgment, due to emotionalism, I evacuated,” said Fisher, 74. “I’ve got four cats inside the house. If I can’t get back in a week, after a while they might turn on each other or trash the place.”

Authorities pushed back against any suggestion the storm’s threat was exaggerated.

The police chief of a barrier island in Florence’s bulls’-eye said he was asking for next-of-kin contact information from the few residents who refused to leave.