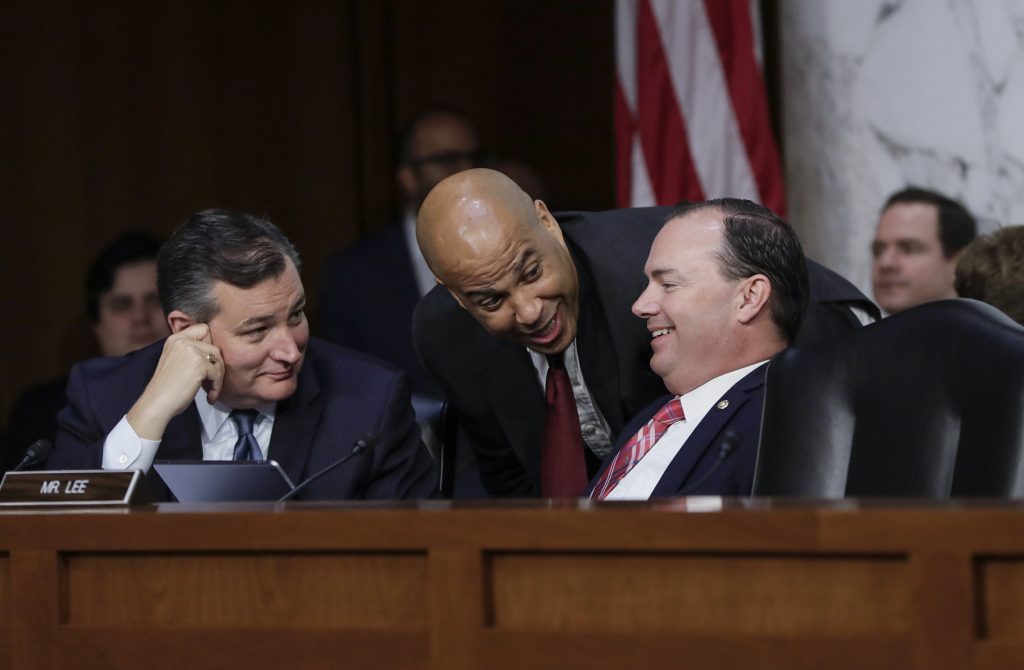 Republicans on the Senate Judiciary Committee brushed aside a flurry of Democratic attempts to delay the consideration of Supreme Court nominee Brett Kavanaugh on Thursday, sticking with a schedule that could see him confirmed by Oct. 1.

Democratic Sen. Richard Blumenthal of Connecticut protested as soon as the hearing gaveled opened Thursday. He says the nomination will be “tainted” and “stained” by the unusual process for vetting the nominee.

“We lack the time. We lack the documents.” He called it a “badly broken process.”

The committee’s top Democrat, Sen. Dianne Feinstein of California, sought a subpoena for documents from Kavanaugh’s time as Bush’s staff secretary. She said Thursday senators “should be able to see this record” and wondered, “What in Judge Kavanaugh’s records are Republicans hiding?”

The Republicans have declined to pursue Kavanaugh’s staff secretary documents, saying it would be too cumbersome. They rejected Feinstein’s motion and several others, including motions to subpoena documents and witnesses and a motion to adjourn.

New documents released ahead of Thursday’s hearing included Kavanaugh’s 263-page written response to questions from senators, along with dozens of files from the judge’s work in the George W. Bush White House that had been available to senators only on a “committee confidential basis.” Democratic Sen. Cory Booker of New Jersey made the Bush documents public.

In new written responses released late Wednesday, Kavanaugh says he would have shaken the hand of a school shooting victim’s father during a break in last week’s Senate hearing had he recognized him before being whisked away by security detail.

Kavanaugh’s explanation for the encounter with Fred Guttenberg — captured in an Associated Press photo that went viral on social media — was among a 263-page response to written questions from senators on a range of issues including executive power and his personal finances.

Kavanaugh wrote that he assumed the man who approached him, introduced himself “and touched my arm” during a break at the Senate Judiciary Committee proceedings had been one of the many protesters in the hearing room. Guttenberg’s 14-year-old daughter, Jaime, was among 17 people killed on Feb. 14 at Stoneman Douglas High School in Florida.

“It had been a chaotic morning,” Kavanaugh wrote. “I unfortunately did not realize that the man was the father of a shooting victim from Parkland, Florida. Mr. Guttenberg has suffered an incalculable loss. If I had known who he was, I would have shaken his hand, talked to him, and expressed my sympathy. And I would have listened to him.”

Kavanaugh’s security detail ushered him out in a “split second,” according to the judge’s response to a written question from Grassley. It was among 1,287 questions from senators, almost all from Democrats.

Pressed by Blumenthal if he had asked police to intervene, Kavanaugh wrote, “No.”

Guttenberg responded on Twitter saying the judge’s response was “not accurate.” He described introducing himself to Kavanagh during the encounter. The gun safety advocate said he was glad Kavanaugh responded in writing, “but I now make the choice not to believe in the sincerity of the response.”

Democrats don’t have the votes to block Kavanaugh’s nomination, if Republicans hold unified, but are fighting it and decrying the process that Republicans used to compile his government records for review.

In releasing a new batch of committee confidential documents about Kavanaugh, Booker, the New Jersey Democrat, was repeating a tactic that could prompt a review from the Senate Ethics Committee.

The 28 new “committee confidential” documents are from Kavanaugh’s time in the White House counsel’s office during the George W. Bush administration and show his involvement in judicial nominations, including for some of the more controversial judges of the era.

Booker is being criticized by his GOP colleagues and outside groups for releasing the documents. Last week, he released some documents that were later made public by the committee, but also others that weren’t. Wednesday’s disclosure brings the total to 75.

Booker has welcomed the fight. He says the documents about Kavanaugh’s work “raise more serious and concerning questions” about his honesty during his testimony before the committee.

The documents show Kavanaugh’s involvement in Bush’s nomination of Charles Pickering to an appellate court in the South amid questions about his views on race relations. Kavanaugh had indicated he was not substantially involved in the nomination.

At issue has been the unprecedented process the Senate Judiciary Committee used for gathering documents on Kavanaugh, an appellate court judge who is President Donald Trump’s nominee to replace retired Justice Anthony Kennedy on the court.

The committee was hoping to quickly process Kavanaugh’s unusually long paper trail and relied on Bush’s lawyer, Bill Burck, to compile the documents, first estimated to be 900,000 pages from Kavanaugh’s time in the counsel’s office. Eventually, some 267,000 pages were made public and 174,000 were held as committee confidential.