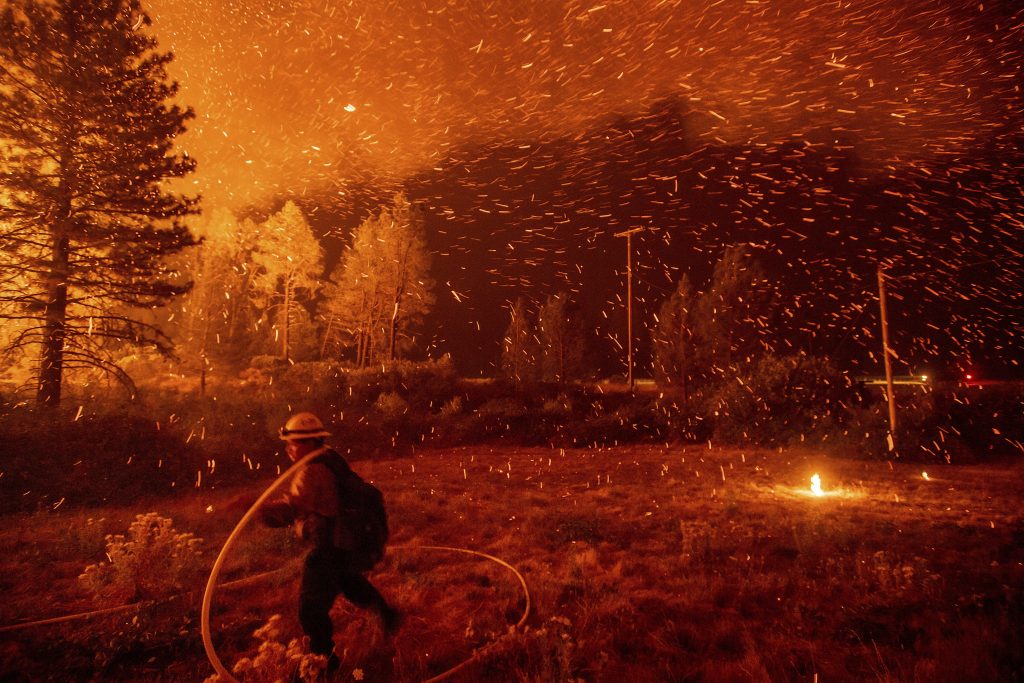 Interstate 5 usually swarms with trucks and traffic as it winds its way through California.

But the main highway between Mexico and Canada was a ghost road Friday morning along a 45-mile northern stretch that remained closed since a fire two days earlier swept down and turned hills on either side into walls of flame.

Drivers fled in terror and several big-rigs burned Wednesday as the fire erupted on both sides of the artery. Crews managed to remove the burned hulks and abandoned rigs on Thursday but flames continued to burn along an edge of the road in some areas, fire spokesman Brandon Vacarro said.

A decision was expected Friday on whether to reopen the highway, but first authorities had to check the safety of the pavement and cut down burned trees next to the road — some of them 70 feet tall — that might be in danger of falling.

The fire had burned more than 34 square miles of timber and brush and prompted evacuation orders for scattered homes and buildings in three counties in and around the Shasta-Trinity National Forest. At times, flames shot up 300 feet high.

Although the fire wasn’t burning near any large towns, Vacarro said about 280 homes were considered threatened. There were some reports that homes had burned but Vacarro could only confirm that an outbuilding and two mixed-use commercial and residential buildings had been damaged.

“It could be like a bed-and-breakfast, it could be a store with a house above it,” he explained.

Meanwhile, truckers who rely heavily on the I-5 to transport timber and other goods along the West Coast had the unenviable choice of waiting or taking a jammed detour that added 115 miles or so to their journeys.

“The road is essentially all two lanes on that journey and there’s some steep hills on there as well so obviously slow-moving trucks going up and down the hill is making it hard to travel,” Vacarro said.

Patience was running thin at the Pilot Travel Center in the town of Weed, near the northern end of the closure. The truck stop’s facilities were stretched to their limits, cashier Jacob Chapman said Thursday afternoon. Parked big rigs lined the roads surrounding the facility.

“It’s been ridiculously congested. It’s been frantic,” Chapman said. “A lot of the truckers are upset. They’re just stuck, they can’t get through and they’re sick of waiting around.”

“The general mood is just tired and upset. The truckers are exhausted and just want to get going. And the locals just want a break from the wildfires,” Chapman said.

“We want our towns to stop being on fire,” he added.

California has been hit with one massive blaze after another, including a blaze not far from the Delta Fire that last month burned about 1,100 homes and killed eight people.

The unrelenting flames have drained California’s firefighting budget and prompted nearly $1 billion in property claims even before the start of the dangerous fall fire season, officials said Thursday.

The deadly Carr Fire and another in the Mendocino area — the two largest blazes in the state this year — destroyed or damaged 8,800 homes and 329 businesses, Insurance Commissioner David Jones said.

“The worst may be yet to come,” Jones warned at a San Francisco news conference, noting that California wildfires are typically more destructive after Sept. 1.

Last year, for example, wildfires that killed more than 40 people and destroyed thousands of buildings in counties north of San Francisco didn’t spark until October.

Also on Thursday, the director of the state’s firefighting agency said in a letter to lawmakers that the agency only had about $11 million remaining in its annual budget and anticipates needing another $234 million to add firefighters and helicopters, and to cover other costs of fires expected later this year.

The department had spent $432 million through the end of August, said Ken Pimlott of the California Department of Forestry and Fire Protection.

The legislature budgets for firefighting costs based on historical averages. Cal Fire has requested extra money in seven of the past 10 years but never this early, according to the Department of Finance.