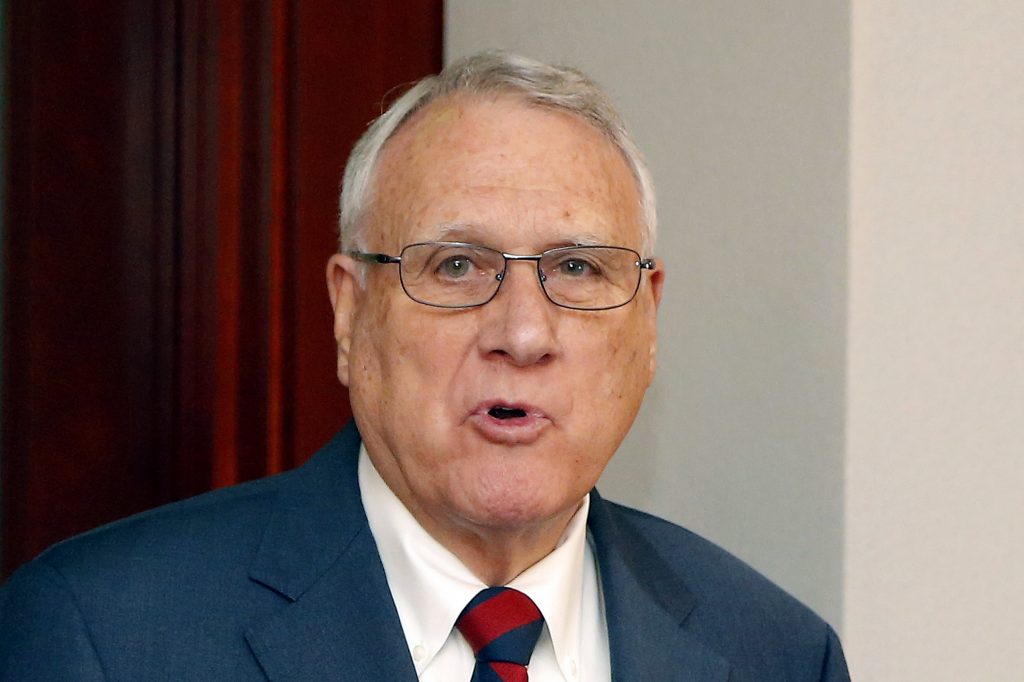 Kyl, 76, agreed to serve at least through the end of the year, Gov. Doug Ducey, R, told reporters at a news conference on Tuesday. He hasn’t committed to serving until 2020, when there would need to be a special election to fill the final two years of McCain’s term.

Ducey announced his decision after a series of memorial services for McCain last week and his burial Sunday at the U.S. Naval Academy in Annapolis, Maryland. McCain, a two-time presidential candidate, died Aug. 25 after a long struggle with brain cancer.

“I am deeply grateful to Senator Kyl for agreeing to succeed his friend and colleague of so many years,” Ducey wrote on Twitter. “Every single day that Jon Kyl represents #Arizona in the U.S. Senate is a day our state is well-served.”

Kyl is a lawyer who has been acting in recent weeks as the top liaison to the Senate on behalf of Kavanaugh, President Donald Trump’s nominee for the nation’s highest court.

Kyl said in a statement: “There is much-unfinished business, including confirmation of President Trump’s nominees for judicial and executive branch positions, and I look forward to getting to work on behalf of my fellow Arizonans.”

Republicans have a very narrow majority in the 100-member Senate. Kyl would restore the 51st GOP vote.

If Kyl steps down at the end of the year, the governor would need to select another temporary replacement for the Senate seat, which was previously held by Barry Goldwater, a one-time Republican presidential candidate. Kyl has made clear that he won’t run in the 2020 election, according to the New York Times.

Kyl served in the House before being elected to the Senate and serving three terms in that chamber, until leaving office in the beginning of January 2013. When Kyl announced he was stepping down, he said: “There’s more to life than being a United States senator. I never anticipated I would be in public service for 26 years.”

He also has been conducting an internal review for Facebook Inc. amid allegations of anti-conservative bias in the company’s treatment of content. President Trump spent much of last week repeating the claim that Facebook and other social media companies censor conservatives.

The companies largely reject the accusation. Sheryl Sandberg, Facebook’s chief operating officer, is due to testify before the Senate Intelligence Committee on Wednesday on foreign attempts to meddle in U.S. politics using the platforms and is likely to face questions about the alleged bias.

Through his entire Senate career, he served largely in the national shadow of McCain. He rose through the party’s Senate leadership ranks to become the No. 2 Republican under then Minority Leader Mitch McConnell, R-Ky., who is now majority leader.

McConnell on Tuesday praised Kyl’s selection. “His constituents will be well-served by Jon’s significant congressional experience and leadership,” McConnell said in a statement.

Kyl’s understated demeanor belied his role as one of the toughest opponents of former President Barack Obama’s policies.

As a member of the Senate Finance Committee, Kyl battled Obama to preserve President George W. Bush’s tax cuts. On the Judiciary Committee and as a lawmaker from a state that shares a border with Mexico, Kyl had a key role in the debate over immigration law.

McCain’s wife, Cindy McCain, who had been described by supporters as a possible choice to succeed her husband, tweeted her support Monday for Kyl.

“John Kyl is a dear friend of mine and John’s,” she wrote, misspelling his first name. “It’s a great tribute to John that he is prepared to go back into public service to help the state of Arizona.”

For Ducey, who faces re-election in November, Kyl was both a safe and solid choice, said Stan Barnes, a GOP political consultant in the state.

“He’s respected by a broad constituency in Arizona and revered by Republicans in Arizona,” Barnes said. “Of all the scenarios of replacing the irreplaceable John McCain, this is the best scenario.”

Dan Eberhart, the chief executive officer of Canary LLC, an oilfield services company, and a major Republican donor, said Kyl is a “very high quality consensus pick as Gov. Ducey tries to appease the Trump and McCain factions of the Arizona GOP.”

As of the end of the second quarter, Kyl served as an outside lobbyist through his law firm, Covington & Buring LLP, for at least one client, according to government disclosures. In recent months, though, his lobbying work with Northrop Grumman Corp., the Pharmaceutical Research and Manufacturers of America trade group, Qualcomm Inc. and Georgetown University has ended, the disclosures say.

Kyl is considered an expert on water and natural resources issues. The Kyl Center for Water Policy is housed at the Morrison Institute at Arizona State University.