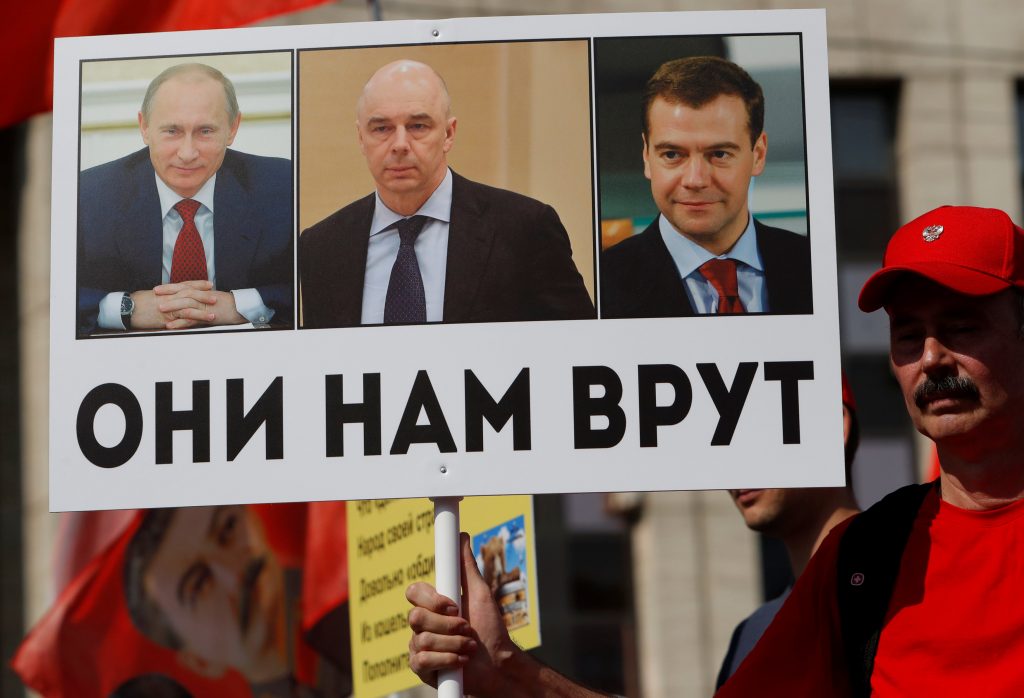 Russians held rallies throughout the country Sunday to protest a government plan to raise the age for receiving state pensions.

Other demonstrations were reported in at least a dozen cities throughout the country including Vladivostok in the Far East, Simferopol in Russia-annexed Crimea and Omsk, Barnaul and Novosibirsk in Siberia.

No arrests were immediately reported. The rallies had official sanction.

The plan was introduced in June and has passed first-reading in the lower house of parliament. But widespread opposition has persisted and President Vladimir Putin’s approval ratings in polls have fallen notably since the plan was announced.

The plan would retain the raising of the men’s pension age from 60 to 65, implementing the steps up over five years.

The plan has attracted opposition from a notably wide specter of age groups and political beliefs. Alexei Navalny, the anti-corruption activist and Putin foe who has built his movement on relatively young and well-educated urbanites, has called for his supporters to rally nationwide next Sunday.

People who appeared to be in their 20s and 30s made up a large part of the Communist-called rally in Moscow. Younger opponents of the move fear that keeping older people in the workforce longer will shrink job opportunities for them. Older people complain they may not live long enough to collect significant benefits.

“The reform that the government offers deprives our women of a normal pension. This reform doesn’t give our youth the chance to get a good job,” Communist Party head Gennady Zyuganov said at the Moscow rally.

The Communists are demanding to have the issue put to a national referendum.

The average life expectancy in Russia was notoriously low in the 1990s, but has risen in recent years. It stands now at about age 67 for men and 78 for women.

Proponents of increasing the age for collecting a pension say the pension system would be overburdened if the eligibility threshold isn’t adjusted since Russians are living longer.

But Putin’s polling numbers dropped significantly. A weekly survey by the Fund For Public Opinion found 61 percent saying they fully or mostly trusted Putin in mid-August, down from 75 percent just before the pension reform proposal.