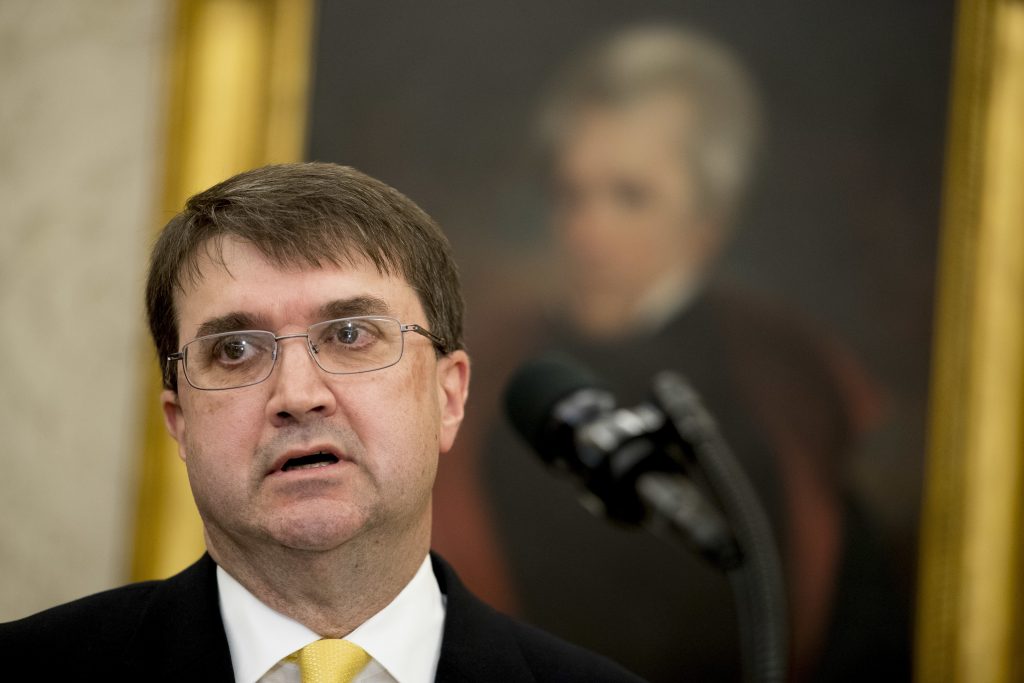 The new Secretary of Veterans Affairs pledged to the American Legion on Wednesday that he won’t privatize his agency’s health-care services even as it increases options for veterans to seek care in the private sector.

Robert Wilkie, who was sworn in last month, also pledged better customer service as a result of the VA overhaul bill that President Donald Trump signed recently in response to the long waits for appointments and short-staffing that have plagued VA hospitals across the country.

“It is our job to serve you well and honorably, showing you the same kind of dignity and devotion that you gave to America,” Wilkie told the group’s 100th annual convention, which was held in Minneapolis. “My prime directive is customer service. When a veteran comes to VA, it is not up to him to employ a cauldron of layers to get VA to say yes. It is up to VA to say yes to them.”

“This is not an option that the private sector can provide,” he said. “The private sector cannot replicate VA’s expertise in things like spinal cord injury, traumatic brain injury, rehabilitative services, prosthetics, audiology, services for the blind, suicide prevention.”

Wilkie, a former assistant secretary of defense under President George W. Bush and former undersecretary for current Defense Secretary Jim Mattis, replaced David Shulkin, who was fired amid ethics charges and internal rebellion over the role of private care for veterans. He’s tasked with delivering on Trump’s campaign promises to fire ineffective VA employees and steer more patients to the private sector.

The agency is the government’s second-largest department, serving 9 million veterans, and its struggles prompted some in the administration to advocate for the privatization of some of its services. Major veterans groups have opposed that, saying the solution is full funding for core VA medical centers.

Veterans at the convention reported mixed experiences with the VA medical system, depending on where they live. Calvin Boswell, a former Navy Seabee from Columbus, Mississippi, who served from 1980-2004, said he gets very good care at the VA hospital in Tuscaloosa, Alabama.

“They do an awesome job,” he said.

But Janet Grass, an Iraq War vet from Dubuque, Iowa, who spent over 22 years in the Navy, said she and her Army veteran son, who recently returned from his third tour in Afghanistan, aren’t satisfied with the VA medical center in Iowa City. She said it takes weeks to get an appointment there, but she puts up with the three-hour round trip because it’s even harder to see a doctor at the small VA clinic in Dubuque.

“You never get the same doctor. So your care is not consistent because the system is so overbooked,” Grass said.

Wilkie also paid tribute to Sen. John McCain, the Navy aviator, prisoner of war and Arizona Republican who died of brain cancer Saturday at 81. American Legion leaders took Trump to task on Monday after flags at the White House, which flew at half staff through the weekend, were raised to full height on