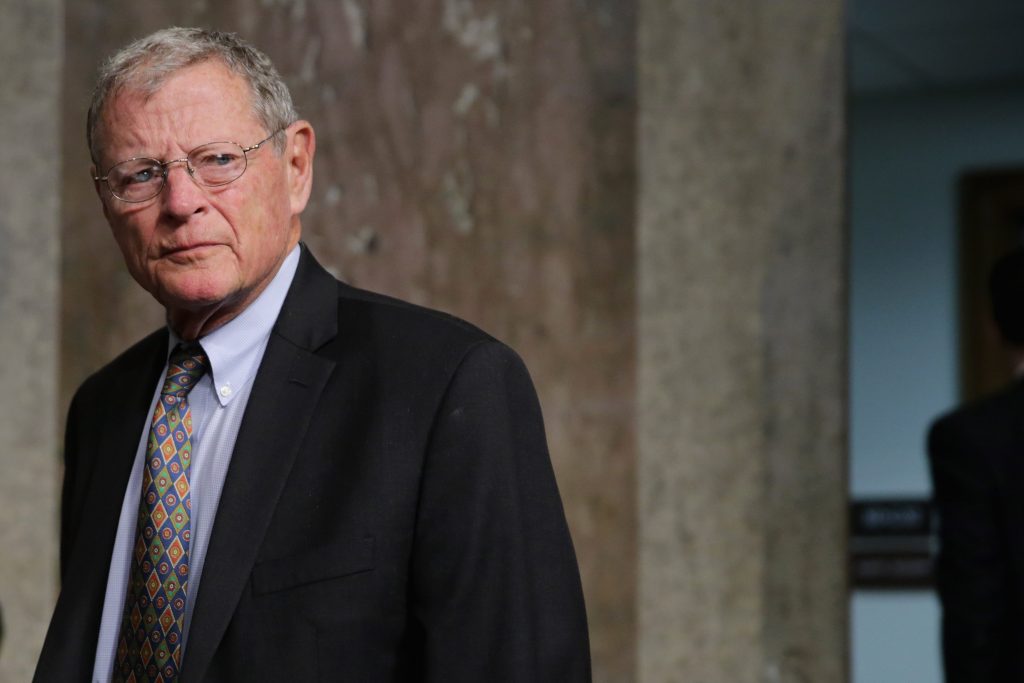 With the death of John McCain, the Senate Armed Services gavel will almost certainly pass to James M. Inhofe of Oklahoma, marking a significant change in leadership style and priorities for the powerful panel.

While the boisterous McCain was a hard-charging critic of both the Pentagon and the commander in chief, the more subdued Inhofe is, in many ways, the opposite.

During his time as the Armed Services Committee’s ranking member from 2013 to 2015, the Oklahoma Republican rarely raised his voice, a marked contrast to McCain’s sometimes fiery outbursts from the committee’s podium or Senate floor.

And while McCain was a persistent and vocal critic of the Trump administration, including Defense Secretary James Mattis, Inhofe often defers to Mattis on major military issues and has lauded President Donald Trump’s foreign policy decisions.

“I do disagree on a few things with McCain,” Inhofe told reporters at a November breakfast after McCain had said he worked better with former Defense Secretary Ash Carter, who served under President Barack Obama, than Mattis.

Before Trump won the presidency, he invited Inhofe to Trump Tower in New York to discuss military issues. Since Trump assumed office, Inhofe has praised Trump’s decision to move the U.S. embassy in Israel to Jerusalem and has praised Trump’s nuclear talks with North Korea.

Substantial differences Inhofe and McCain were also of different minds on policy issues affecting the military and its vast bureaucracy.

During Senate debate last year on the fiscal 2018 defense authorization act, McCain offered an amendment that would have created a new Base Realignment and Closure (BRAC) commission to review all military installations. The proposal could have potentially started a new controversial BRAC round, but the amendment ultimately failed.

Inhofe, who isn’t altogether against the BRAC process, opposed starting a new round when the Trump administration and the Republican-controlled Congress were in the nascent stages of a military build-up.

“When you talk about excess resources, excess capabilities and you’re in the middle of growing and rebuilding the military, it doesn’t make sense to (do a BRAC round) at that time, because you don’t know what you’re going to need,” Inhofe said.

With Inhofe now expected to helm the Senate Armed Services Committee, Pentagon hopefuls with careers in defense contracting — a sore spot for McCain, who worried about the so-called revolving door — could also face less scrutiny.

In November, McCain and Massachusetts Democrat Elizabeth Warren teamed up during the confirmation hearing for John C. Rood, a former vice president at Lockheed Martin and Trump’s nominee for undersecretary of defense for policy.

Rood stumbled in answering a string of questions from Warren on if he would completely recuse himself from Pentagon discussions that relate to Pentagon’s biggest contractor.

“I don’t like your answers,” McCain told Rood, who was ultimately confirmed. “I suggest you answer the question or you’re going to have trouble getting through the committee.”

Inhofe, however, is not as inherently suspicious of industry executives-turned-Pentagon officials.

“They’re bringing knowledge with them on how to do things and do things cheaper,” Inhofe has said. “There’s kind of a tendency to assume … that somehow industry is all on the take and that they’re the bad guys. But look, they’re the knowledgeable ones.”

Pet projects With Inhofe at the helm, the committee can expect more hearings on China’s military ascension, Africa issues, and space. Following the Pentagon’s January release of the National Defense Strategy, which labeled Russia and China as the nation’s top security threats, Inhofe has traveled the globe and has witnessed China’s rise first-hand.

During a trip through East Africa in late May, Inhofe and his office said U.S. military officials believe the Chinese are looking to parlay a Chinese-built commercial port in Manda Bay, Kenya, into a military facility — an unwelcome development on Capitol Hill.

As one of the Senate’s leading voices on Africa, Inhofe will likely continue to monitor security on the continent after he takes the gavel and may even look to change how the military handles African security issues.

Inhofe was instrumental in standing up U.S. Africa Command, a unified combatant command with geographic responsibility for nearly the entire continent. AFRICOM, which is headquartered in Germany, currently does not have dedicated troops assigned to the command and Inhofe is one of Capitol Hill’s strongest advocates for providing the command with its own forces.

Seniority is often the deciding factor for who will wield the gavel, but appointing a new committee chairman still requires the approval of the committee’s majority members, a vote by the full GOP conference and approval on the Senate floor.

Still, Inhofe will not likely run into problems assuming the committee’s top job.

Despite the political and policy differences between the two men, Inhofe will almost certainly be committed to maintaining the committee’s long reputation of bipartisanship.

This year, while standing in for the ailing McCain, Inhofe has already worked with Democrats on the committee to push through the 2019 defense authorization bill, named after McCain and signed into law earlier this month.