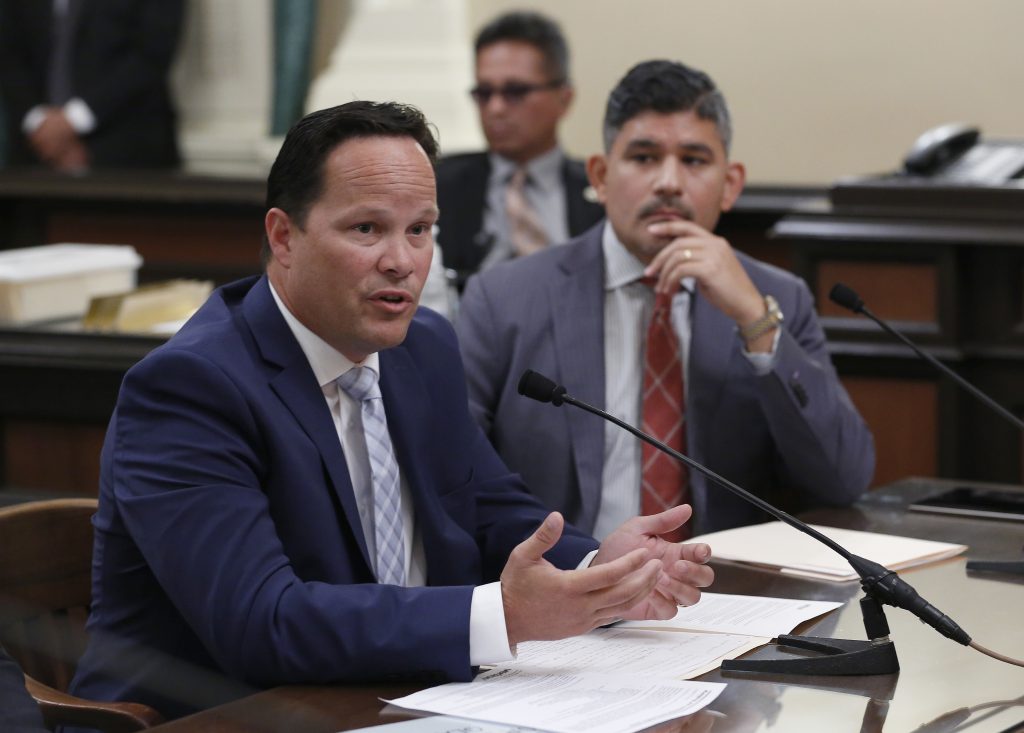 Verizon rolled out changes Friday as state lawmakers said they were outraged to learn the telecommunications company had slowed firefighters’ internet service while they battled what became the largest wildfire on record in California.

Verizon said it removed all speed cap restrictions for emergency workers fighting wildfires on the West Coast and for those in Hawaii, where emergency crews were rescuing people from areas flooded by Hurricane Lane.

The company promised to lift restrictions on public safety customers and provide full network access when other disasters arise.

The announcement came hours before the state Assembly Select Committee on Natural Disaster, Response, Recovery, and Rebuilding held an informational hearing on the incident.

The goal is to determine “how we ensure that all public safety has the tools they need in some of our hardest moments in California’s history battling these natural disasters,” said Democratic Assemblywoman Monique Limon of Santa Barbara.

The Santa Clara County Fire Department has said Verizon slowed its internet communications at a wildfire command center several weeks ago, crippling an emergency communications truck’s data speeds and forcing firefighters to use other agencies’ internet connections and their personal cellphones.

The county disclosed the problem recently in a lawsuit brought by 22 state attorneys general seeking to restore net-neutrality rules repealed by the Federal Communications Commission. The court filing alleges that the slowdown was caused by the FCC’s action, which allows telecommunications to slow internet speed to selected customers.

California lawmakers are considering a bill that would require internet companies to restore net neutrality in California, requiring equal data access to all customers.

Meanwhile, U.S. House Democratic Leader Nancy Pelosi, U.S. Rep. Anna Eshoo, a senior member of the Energy and Commerce Committee, and 11 other Democratic members of Congress sent a letter to the Federal Trade Commission calling Verizon’s action “unacceptable” and demanding an investigation into whether it amounted to “unfair or deceptive” practices.

Dave Hickey, Verizon’s vice president of business and government sales, told lawmakers the error by the company had nothing to do with net neutrality.

Rather, the county had used up its monthly data capacity under an internet plan that allows Verizon to significantly slow service. The department bought a government high-speed wireless data plan that provides an unlimited amount of data at a set monthly cost, but the company reduces speeds if the buyer exceeds certain levels of use during that billing cycle.

Santa Clara County Fire Chief Anthony Bowden called unlimited data flow critical to public safety but said public agencies do not have unlimited funds and try to find an affordable plan that will meet their needs.

He also called for increasing protections to cell towers in fire-damaged or fire-prone areas to maintain critical communications and warnings to area residents as well as first responders in emergencies.

Bowden said Verizon restored full speeds only after the department subscribed to a more expensive plan.

That shouldn’t have been necessary, Hickey said, because the company’s policy is to immediately remove data speed restrictions when contacted in emergency situations.

He blamed an “operational error” for the company’s failure to lift the data cap as soon as firefighters called. Instead, a Verizon representative told the county to upgrade to a more expensive package.

Verizon is rolling out a new plan this week for first responders nationwide that will have no such restrictions and data priority access, at no additional cost.

Rudolph Reyes, Verizon’s west region vice president and associate general counsel, read a statement saying the company “didn’t live up to our own promise of service and performance excellence when our process failed some first responders on the line, battling a massive California wildfire. For that, we are truly sorry. And we’re making every effort to ensure that it never happens again.”

Meanwhile, a bipartisan conference committee proposed legislation Friday that would allow California utilities to sell bonds and pass the cost to customers to help cover liability when their equipment starts wildfires.

The proposal set for a vote this week does not include a controversial proposal backed by California Gov. Jerry Brown to reduce electric utilities’ liability.