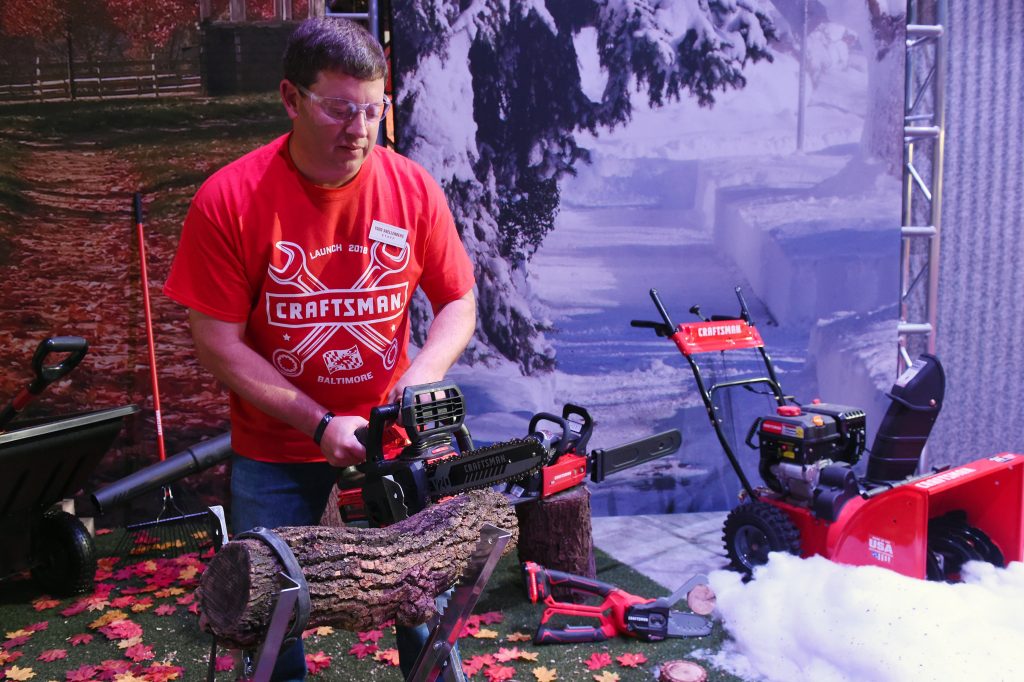 Soon after Stanley Black & Decker bought the well-known Craftsman brand from Sears Holdings last year, it embarked on what it says is a ground-up remake of the tool line, hoping to revitalize a name that had languished alongside the struggling department store.

Stanley has spent the past 18 months designing and making a new line of Craftsman products, the first 1,200 of which were unveiled Thursday during a launch event in the “Craftsmen Garage” at a business park in Middle River, Md.

The “garage” is being used to “bring Craftsman to life, here in Baltimore,” said Jeff Doehne, the general manager of the Craftsman brand, which will be managed out of the Towson, Md., headquarters of Stanley’s power tools and storage divisions.

The company says its designers aimed to keep the tools durable and affordable while making them more efficient and compatible with new technology. A new line of battery packs is versatile enough to start a gas-powered lawnmower or snap on to a cordless impact driver.

Rows of bright red power tools, storage chests and outdoor equipment were on display in the space the company has used for about a year to give hands-on demonstrations to retail customers, investors, employees and others. On Thursday, the toolmaker invited tool bloggers, DIY enthusiasts and other media in to try out its line of Craftsman mechanics tools, metal storage, garage door openers, shop vacs, portable storage, hand and power tools, and outdoor tools, both for homeowners and professionals.

“Craftsman is a brand that’s had 90 years of history here in the U.S. and it has always stood for being [a]good quality product at great value to the users,” Doehne said. “We’re going to continue to drive that with our next generation of Craftsman, but we’re introducing new technologies and new processes to the product to be very competitive in the marketplace.”

The first wave of the new line will launch this fall at Lowe’s and Ace hardware stores and be sold on Amazon in time for the year-end shopping season. A limited number of products, more than 30, have been on the shelves since May at Lowe’s stores nationwide. Craftsman sales have totaled about $30 million in its first three months.

“We … have seen great interest in the brand,” said Jenny Popis, a Lowe’s spokeswoman, in an email. Craftsman “is known in the minds of consumers for being trusted to deliver high-quality products at a value, backed by a great warranty.”

Stanley appears to be targeting the market between high-end professional tools and lower-priced products for more casual users, one marketing expert said.

“They now have a sharp designed line that brings some Dewalt toughness, industrial design and a uniquely American red brand to the market,” said Ed Callahan, co-founder and creative strategist of Baltimore-based Planit advertising and marketing firm. “With this, it appears they are taking a new approach to the exploding DIY market and introducing a midlevel line for the pro-seeking consumer that wants to have a tool that feels and looks pro without the price.”

Craftsman had lost some of its appeal at Sears, but “the brand was too big to be too badly damaged,” Callahan said.

Sears launched the brand in 1927, offering an unlimited lifetime warranty on the hand tools, saying it would replace damaged or broken tools free of charge. The warranty helped cement the tool line’s reputation for quality that remains to this day.

Connecticut-based Stanley, which is paying nearly $900 million over three years for the brand in a deal that closed in March 2017, is exploring additional retail channels toward a goal of eventually growing Craftsman into a $1 billion business.

The company, with about 2,000 workers in Maryland, including at a Hampstead manufacturing plant, has added about 125 workers in Towson to support Craftsman design, product engineering and marketing efforts. Towson had been the headquarters of Black & Decker before it merged with Stanley Works in 2010.

Stanley and Sears announced the Craftsman sale in January 2017. While analysts expected the deal to boost Black & Decker, offering it opportunities with a well-known brand, they thought the loss of exclusivity could harm Sears, which has been closing stores, by giving consumers another reason to skip its stores. About 90 percent of Craftsman products had been sold almost exclusively through Sears, Kmart and Sears Hometown stores.

In the deal, Stanley bought the rights to sell Craftsman at channels outside of Sears, while Sears can continue to sell some of its former Craftsman products.

“We’re committing to bringing manufacturing of the Craftsman brand back to the United States,” where more than 20 plants are now doing some of the work, including a factory in Hampstead that makes Craftsman parts, said Tim Perra, a Stanley spokesman. “It’s one of those brands, we strongly believe, [that] should be made in the U.S.A.”