Many Hoped for a Rebound in Kentucky Coal Jobs Under Trump; It Hasn’t Happened 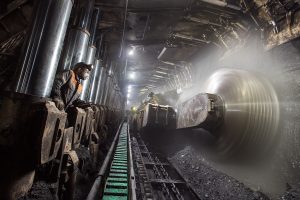 The number of coal jobs edged down in Kentucky between April and the end of June, illustrating the continued struggles of the industry despite President Donald Trump’s campaign promise to “put our miners back to work.”

Statewide, the number of coal jobs averaged 6,238, according to a report published last week by the Kentucky Energy and Environment Cabinet. That was down 0.9 percent from the first three months of the year, but it was 4.8 percent less than the same period in 2017, the report said.

Jobs were down in both the state’s coalfields.

In Eastern Kentucky, the decline was 1 percent from the first quarter of 2018 and 1.1 percent below the same quarter a year ago.

In Western Kentucky, the decline from the first period in 2018 was 0.7 percent, but coal jobs in the region from April to June dropped 10.6 percent from a year earlier.

As of mid-year, there were 3,909 coal jobs in Eastern Kentucky and 2,320 in Western Kentucky, according to the report.

Production also tailed off as summer approached – down 4.2 percent statewide from the first quarter, 2.5 percent in Western Kentucky and 6.3 percent in Eastern Kentucky.

The report shows a continued shift toward underground mining as the dominant producer in the state.

Western Kentucky continued to lead overall in production, with 57 percent of the state’s total. The eastern end of the state produced more coal for decades, but that changed after Union County overtook Pike County in 2012 to become the state’s largest producer.

Union County produced 2.2 million tons of coal in the second quarter, as much as the combined total of the two biggest producers in Eastern Kentucky, Pike and Perry counties.

Coal has lost ground to natural gas as a fuel for generating electricity because of sustained low natural gas prices.

Tougher environmental rules, the rise of renewable energy such as wind and solar power, and other factors also have played a role in coal’s downturn, but studies have pointed to competition from natural gas as the main reason.